A New Simple Layout For A Large Refractive Astronomical Binocular

A New Simple Layout For A Large Refractive Astronomical Binocular

I’ve been attracted to the idea of a large refractive binocular ever since reading Walter Scott Houston’s description of his battleship binocular in his Sky & Telescope column back in 1969. This sentiment has been reinforced a few times at star parties over the years whenever I’ve encountered well-done examples of larger binoculars, the last being at Star Quest at Green Bank a few years ago. I do not remember the builder’s name, but the binocular was made of two 6 inch refractors mounted side by side, with folding optics.

As we all know, the main layout problem to solve for binoculars having objectives larger in diameter than the observer’s interpupillary spacing is how to bring the two exit pupils to the observer’s interpupillary distance. Over the years, I’ve spent several hours playing with optical schemes. I eventually came up with a slightly more conducive layout for a folding scheme that, I believe, might simplify construction and alignment enough to allow my meager mechanical skills sufficient leeway. However, the scheme was still rather conventional. I kept plugging, and late last year, I had an idea that I believe is worth passing on.

Perhaps universally, binocular schemes lay the two telescopes side by side in an symmetrical arrangement, such that a line through the two centers of the objectives is parallel to a line through the two centers of the exit pupils. This arrangement by necessity forces a folding scheme once the objectives are as large or larger than the interpupillary distance, simply because the lenses need to get out of each other’s way. So it occurred to me that, instead of knuckling under to the standard layout, why not throw out the artificial constraint (for astronomical binocs, that is) that the objective centers be lined up with the exit pupil centers? In other words, why not shift the objectives out of that nominally horizontal arrangement, sliding one downward, so that they can be restored to the observer’s interpupillary distance in the horizontal direction? This would remove the need for a complicated optical folding scheme to achieve that end, even though each scope would still need a single right angle turn, say via a star diagonal. That is not a bad compromise, because it favors observing comfort.

This isn’t the whole story yet, but let’s review where we are. As in probably all other binocular layouts, if we merely mount two scopes side by side like a field glass, but rotate them relative to the observer so that in the horizontal direction the scopes are separated by the interpupillary distance, then we will have introduced a new problem by solving the first. One of the two scopes’ exit pupils will not be accessible, because it will be situated too far below the observer’s eye to be useful. This is still true with star diagonals inserted.

One scope will be nicely accessible, but the other, though aimed at the other eye, will be inches down.

So, what can be done to bring it this exit pupil up to the height of the first, restoring the full binocular function? The answer is simple, and also involves a departure from the usual layout. The two objectives must simply be offset from each other in the axial direction, that is, along their optical axes. The distance of this offset is exactly equal to the vertical offset introduced to allow the lenses to stay out of each other’s way when they are rotated around their common center to the interpupillary distance in the horizontal direction.

OK, time for some drawings. Too many words.

Here’s the front view of the layout. The horizontal distance of the objectives has been reduced to the interpupillary distance as promised, but the vertical offset is an apparent problem. 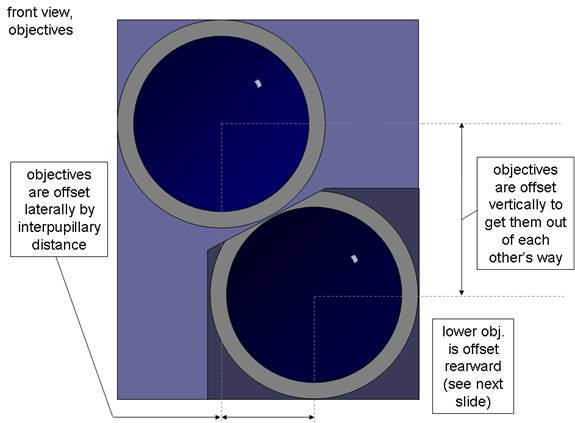 Now for the side view, showing the solution the last problem: 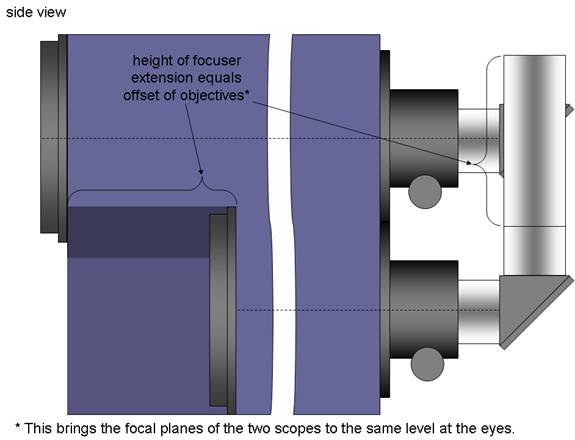 Now for the rear view, making all clear: 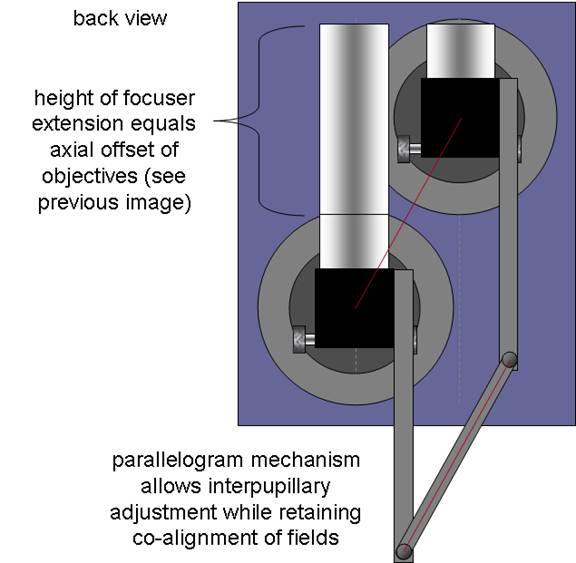 A linkage mechanism needs to be added to allow for adjusting interpupillary distance. This linkage would challenge my own construction skills, but I’m certain it can be done. Note that the slight angular shifts introduced to space the exit pupils to various interpupillary distances will not cause significant vertical displacements of the exit pupils. As a refinement of the focuser scheme, the two focusing shafts can be aimed at each other and linked with a solid connector, so that turning one knob will focus both scopes simultaneously. A helical mount to one of the eyepieces can introduce independent focusing as well, just as in common binoculars. 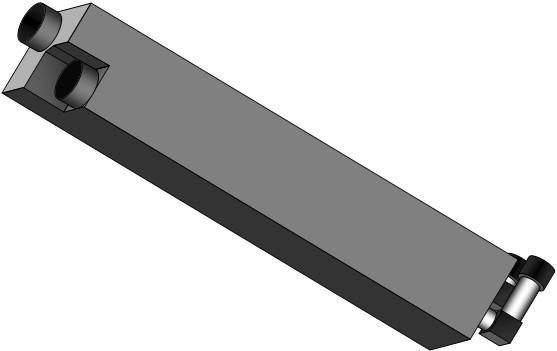 I currently own a 6 inch f/10 Jaegers refractor, and want to acquire another just like it for construction of this binocular. Once it’s finished, I’ll take it to a major star party, with luck, this year’s Stellafane.

This layout will probably not work well in terrestrial use, because for finite conjugates, a true parallax exits that the eye/brain uses to build a 3-D picture in the mind. The vertical parallax will probably be confusing, but hey, maybe not. Certainly, the vertical shift means nothing to astronomical observing, which is why I want to build this thing.

I’d appreciate comments, and hints on how to make the linkage from the more mechanically inclined out there.