The Fabry – Pérot etalon is at the heart of all modern Hydrogen-alpha and CaK Calcium narrow bandwidth solar filers. Each solar filter manufacturer created their unique patented system to observe a solar image in one wavelength. While some use layers of mica, others use an air spaced design. The Fabry – Pérot etalon was created in the late nineteen century by two French men Charles Fabry and Alfred Pérot. 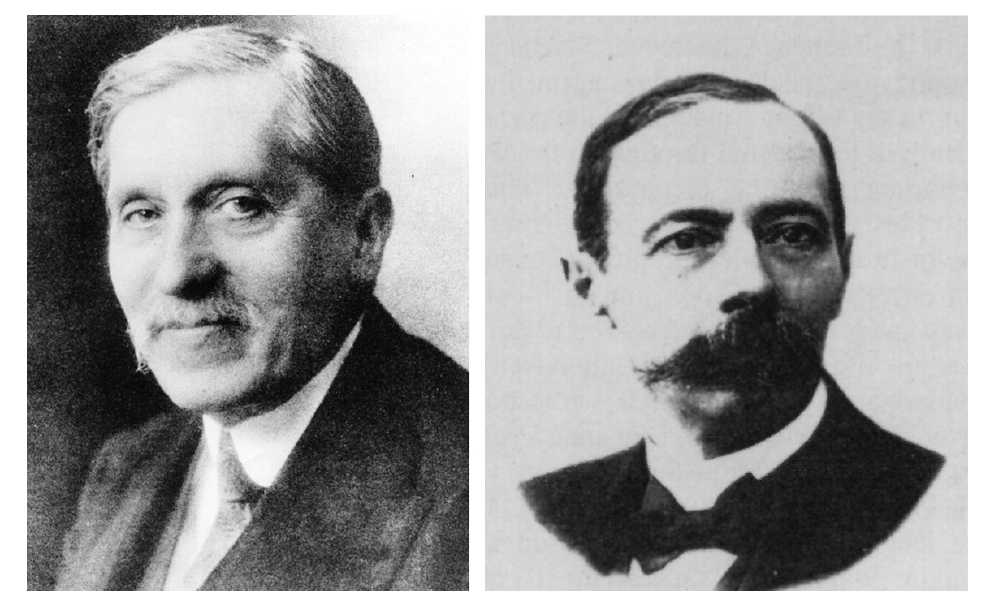 hysicists Charles Fabry (below left) and Alfred Pérot (right) published their most important article in 1897 on what is now called the Fabry - Pérot interferometer. Despite the great importance of this instrument for modern research today in physics and astrophysics, its inventors are almost completely unknown to most physicists.

The Fabry - Pérot interferometer is a more widely used research instrument today than at any other time in its 100 year history. Its origin derives from the theory of multibeam interference developed by Charles Fabry in 1890-1892, and incorporated into the design of the first interferometer constructed by Fabry and his colleague, Alfred Pérot in 1897.

In the form first developed by Fabry and Pérot, their Fabry - Pérot interferometer consisted of two perfectly flat glass plates coated on their parallel facing surfaces with thin silver films. In the first interferometer these metal films reflected over 90% of the light incident on them. The portion of the light beam incident on the outer surface of one of the plates, and passing through the silver coating, was then trapped between the silvered plates and reflected back and forth a very large number of times. At each reflection, however, a small fraction (1/10 or less) of the incident beam escaped through the second plate. As a result, a large number of parallel beams of light emerged at the same angle at which they had entered the interferometer and could then be focused to an image by a converging lens. The constructive interference of these many parallel beams of light produced very bright and remarkably sharp interference fringes.

By increasing the reflectivity of the plates and their separation, the resolution of the Fabry - Pérot interferometer can be increased until it is finally limited only by the natural linewidth of the spectral lines emitted by the source.

Later they also made many important contributions to astrophysics, including Fabry’s 1913 discovery, with Henri Busson, of the ozone layer in the Earth’s atmosphere. Since they used their interferometer to make many important contributions to astrophysics, the names of Fabry and Pérot are more likely to be familiar to astronomers than to physicists. Both were trained as physicists and served as professors of physics, at important French universities throughout their careers.

At the beginning of the twentieth century, Fabry and Pérot were highly regarded by physicists throughout the world for their contributions to optics and spectroscopy. Later they made many important contributions to astrophysics. Fabry and Pérot deserve to be better known and more widely appreciated by the present generation of physicists, astronomers and historians of science.

Charles Fabry (1867 – 1945) was born on June 11, 1867 in Marseille, France, the seaport city on the Mediterranean in southeast France. When he was 18, he entered the Ecole Polytechnique in Paris. After graduating two years later, returned to his native Marseille and in 1889 he received the license to teach at any State secondary school. Fabry taught at Lycées (High Schools) in Pau, Nevers, Bordeaux, Marseille, and finally at the Lycée Saint Louis in Paris.

uring this time he was preparing his doctoral dissertation on the theory of multibeam interference phenomena. This topic had been treated as early as 1831 by George Biddle Airy (1801 – 1892), but not with the depth and sophistication Fabry brought to the subject.

Fabry’s interest in astronomy, acquired as a student while observing the night sky with his two brothers, led him to apply the Fabry – Pérot interferometer to the study of the spectra of the sun and stars. For work in astrophysics Fabry and Perot found their interferometer especially well suited for obtaining very high spectral resolution for sources of small angular size, like the other planets or stars. It also achieved medium to high resolution for sources of low surface brightness, like nebula or galaxies. In 1911 Fabry and Buisson discovered the “nebulium” lines in the Orion Nebula. In 1913 they were the first to demonstrate that the ultraviolet absorption in the Earth’s upper atmosphere was due to ozone. In 1919 Fabry hosted in Paris the first international meeting on atmospheric ozone.

Soon after his arrival in Marseille in 1894, Fabry entered into a close collaboration with Pérot on the design and construction of a multibeam interferometer, based on the theory Fabry had developed. In 1894 Fabry replaced Alfred Pérot ( 1863 – 1925 ) as lecturer at he University of Marseille, where he spent he next 26 years, starting as an assistant in de Lepinay’s laboratory. In 1904, when de Lepinay retired, Fabry was appointed to fill his post as Professor of Physics at Marseille.

Fabry has described in his own words how the work began on the instrument that later was named after him and Pérot. “The subject on which we began to work had occurred to me, partly by chance, following an observation in an electrical problem. A young physicist who was working with me wished to study the spark discharges passing between metallic surfaces separated by the very small space of a micron or less. He consulted me as to the method which he could employ to measure such small distances. The idea came to me that it would be easy to solve the problem if it were possible to observe the interferences produced across the metal.”

During his career, Fabry published 197 scientific papers, 14 books, and over 100 notes, obituaries and popular articles. For his important scientific achievements he received the Rumford Medal from the Royal Society of London in 1918. In the United States his work was recognized by the Henry Draper Medal from the National Academy of Science in 1919 and the Benjamin Franklin Medal from the Franklin Institute in 1921. In 1927 the honor most coveted by French scientists was bestowed on him: He was elected to the French Academy of Sciences.

Throughout his life Fabry was very interested in the teaching and popularization of science. He wrote both textbooks and popular books on science. For many years he taught an introductory course on electrotechnology every Wednesday evening. The course was scheduled for 9:00 p.m., but the doors of the large lecture room had to be closed at 8:30 p.m., because no more people could squeeze in. He had the ability to capture a diverse audience of science students, engineers, and working men by his clear, witty words and his skillful use of demonstrations. He was both an outstanding research physicist and a spellbinding lecturer. Charles Fabry was truly the Richard P. Feynman (1918 – 1988) of France.

During World War II Fabry left Paris to carry out secret optics research related to the war effort. At the end of the war he returned to Paris, but his health was failing and he died on December 11, 1945. He added much to the established French tradition in optics, reaching back to Etienne Malus (1775 – 1812) and Augustin Fresnel (1788 – 1827).

His own words may be quoted to summarize his brilliant career: “My whole existence has been devoted to science and to teaching, and these two intense passions have brought me very great joy.” 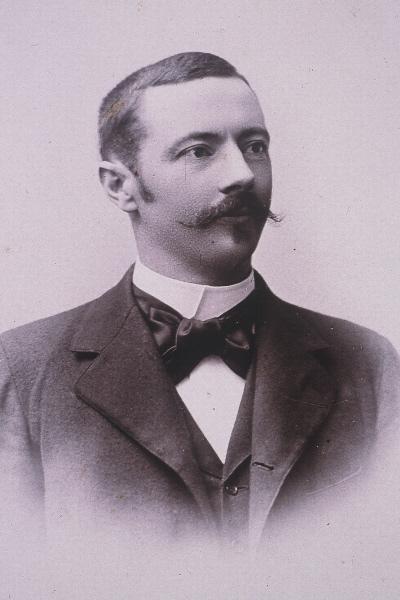 lfred Pérot (1863 – 1925) was born in Metz, France and educated at the Lycee in nearby Nancy and then at the Ecole Polytechnique in Paris. After completing his course of studies in 1884, he returned to Nancy to do research in physics under René – Prosper Blondlot. In 1888 Pérot received his Doctorate degree from the University in Paris. After receiving his degree, he was appointed a lecturer at the University at Marseille. He began work in the rapidly developing field of industrial electricity, publishing some research on the electromagnetic waves that Heinrich Heretz had discovered in Karlsruhe in 1888. Soon he became a consultant to the emerging electrical industry. In 1894 he received a special appointment as Professor of Industrial Electricity at Marseille. It was at this time that his fruitful collaboration with Fabry began. Their first research together was the development of the inferferometer that brought them lasing fame. On this project, as in most of their subsequent collaborations in the years 1894 – 1902, Fabry handled most of the theoretical planning, optical measurements, and calculations, while Pérot contributed his great mechanical skill to the design and construction of the instruments needed for their research. Pérot liked to gather a group of talented technicians around him for the construction of needed research apparatus. The first Fabry – Pérot interferometer was undoubtedly so successful because of Pérot’s great talent for designing and building equipment.

Fabry and Pérot constantly improved their interferometer, and began to apply it more and more to astrophysical problems. They soon discovered small systematic errors in the earlier work of Kayser and Runge (1888) and that of Rowland (1901) on the solar spectrum. These researchers both had employed large Rowland gratings ruled in Rowland’s laboratory in Baltimore. The more accurate Fabry – Pérot interferometer measurements showed convincingly that the solar wavelengths obtained from the grating spectra were too high. The Fabry – Pérot interferometer soon became the preferred instrument for highly accurate wavelength measurements on spectra, whether obtained from sources in the laboratory or in the universe of stars and galaxies.

In 1901 Pérot was asked to organize and direct a new laboratory in Paris. He did an excellent job, but soon grew weary of the heavy administrative load that fell upon him. He resigned this position in 1908 to become a professor at Ecole Polytechnique as successor to Henri Becquerel (1852-1908), while doing most of his research at the Meudon Observatory near Versailles. There Pérot devoted himself more and more to solar physics, and especially to the use of the Fabry – Pérot interferometer for the measurement of Doppler displacements of solar spectral lines. For the remaining years of his career, a deep interest in the relationship between laboratory physics and astrophysics motivated his research. He also continued some work on electricity, making contributions to the development of the triode vacuum tube, and to telegraphy. In 1920-1921 Pérot attempted to verify the gravitational redshift predicted by the general theory of relativity, but failed in this overly ambitious endeavor. He served as a member of the French Bureau of Weights and Measures. In 1915 he published an interesting booklet on the decimal metric system.

Alfred Pérot died on November 28, 1925, at the age of 62. His colleague and close collaborator, Charles Fabry outlived him by 20 years. Pérot was not well known by physicists outside of France. He preferred to remain with his family rather than travel abroad for conferences and meetings. This may explain why Alfred Pérot is not better remembered today.