This is the final installment of the series and I hope you have enjoyed reading them as much as I have experienced writing them. While I personally have not strictly adhered to the "budget minded" theme of these articles, my conclusions in that vein are still valid and hopefully others will benefit from my occasional fiscal lapses.

I begin by revisiting Part III in which I mini reviewed the Konus 130 Maksutov Cassegrain and concluded its performance was inferior to an apo refractor for planetary imaging. Well, I was wrong and I attribute my hasty conclusions to less than mature webcam imaging skills. As you can see below, the Konus 5" is really very equivalent to my 3" TV refractor both in terms of contrast and sharpness. As detailed in Part III, the Konus package is so economical that I would endorse it as the best valued planetary imaging instrument around. The inverse conclusion that can also be drawn is how good the TV optics really are (and from a nearly 20 year old scope) as I'm pushing the magnification per inch of aperture probably 2-3 times higher through the TV than through the Konus in order to gain equivalent image size . 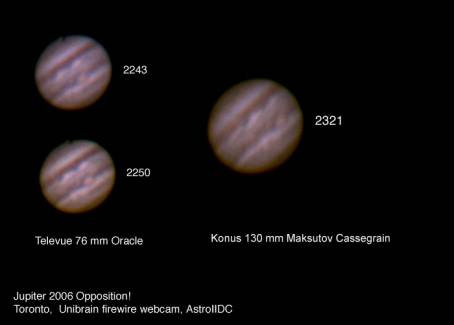 There does appear to be some image softness at high magnification with the Konus which I suspect is due to mild miscollimation and even this can be addressed by accessing the primary mirror alignment screws but definitely not recommended for the average user.

It is possible to do DSO imaging using a motorized Alt/Az mount like the Meade DSX and a modified long exposure webcam such as the Meade DSI or Orion StarShoot, the latter benefiting from thermoelectric cooling and lower noise. Field rotation and poor tracking accuracy in Alt/Az is compensated for by software during the stacking of multiple short (15s) exposures but you'll never get images approaching those in Sky & Telescope.

Serious long exposure imaging requires celestial tracking in polar orientation since perfect alignment of the scope axis to that of the Earth's rotation will allow perfect tracking with only small and occasional corrections in the speed of one drive motor. These corrections in turn are the result of manufacturing imperfections in the worm gears otherwise referred to as periodic error. Balance of the OTA in both horizontal and vertical axes is crucial to smooth tracking and minimal stress on the gear train. Polar alignment can be approximated by pointing your mount at the star Polaris but the true north celestial pole is almost a full degree away (about the span of two full Moons) from Polaris in the direction of the star Kochab at the end of the Little Dipper.

In the real world one often is unable to achieve perfect polar alignment or purchase a mount with insignificant PE so small adjustments must be frequently made to keep tracking accurate. In the old days (about 10 years ago) one could manually correct or guide the mount with small adjustments to the motor drives by watching a reference star through a reticle finder. This is literally back breaking work which can be easily performed by having a webcam watch this reference star and software provide the necessary mount corrections.

I'm a Grab and Go sort of guy so Alt/Az viewing really appeals to me and for wildlife and planetary viewing it works really well. This is the reason I opted to purchase a set of Meade LX90 forks and I recycled the Synta AZ3 tripod from Part II and constructed a wood wedge to retain some semblance of economy. The most important feature of the wedge is the midline slot that allows you to shift the fork off center keeping the center of gravity somewhat over the tripod as wedge mounted forks are notoriously unstable. I use a 12V car battery as a power source and it's placed on the tripod accessory tray to further stabilize the LX90.

The best compromise choice of imaging camera I believe is a DSLR and there is no better value than a used Canon 300D Rebel. The Canon Digital Rebel series is into its 3rd generation as consumers chase every bigger pixel array dimensions but the original 6.3 megapixel 300D is plenty big enough. I have yet to produce an image good enough to enlarge to 11 x 7". Images must also be saved in raw, data lossless format in order to benefit from post processing and larger megapixel arrays mean files in the 60 MB range. A dedicated imaging camera from SBIG or Starlight Express would be distinctly better performing but the DSLR can be used for conventional photography and is so prevalent in the modern household that it may not even be an additional expense. The Canon in particular boasts a market unique CMOS imaging chip that is extremely low noise during long exposures. An additional benefit is that the 300D firmware was essentially taken from the much more expensive Canon 10D and enterprising hackers managed to reactivate many of the custom 10D features. The two main features useful for astroimaging are ISO 3200 and mirror lock up, both currently still unavailable from any camera at such a low price point. Another important modification is the removal of the stock UV/IR blocking filter and replacement with clear optical glass in front of the CMOS. This make the camera especially sensitive to H Alpha emissions prevalent in nebulas. Normal daylight color balance is affected but the placement of an external screw on IR/UV blocking filter on the end of the DSLR lens restores full normal function. You will recall this filter from its use in planetary imaging from Part II. 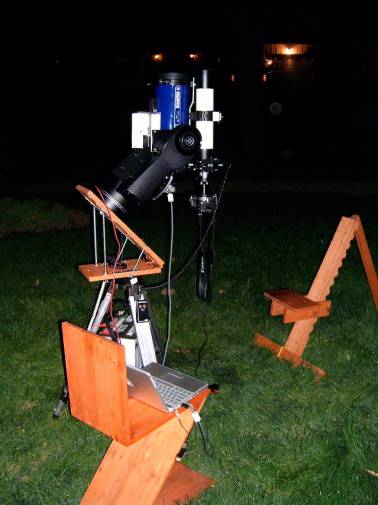 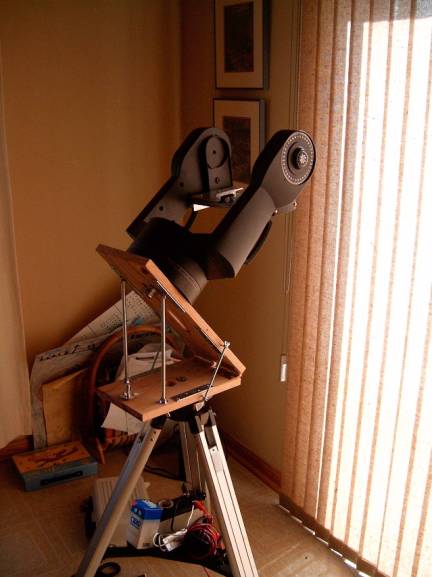 Autoguiding was performed with my firewire webcam through the TV refractor and imaging through a Meade 8" SCT with a f/6.3 focal reducer and controlled with my Mac G4 PowerBook running AstroIIDC. This was not exactly optimal as the focal length of the guide scope was half that of the imager such that tracking errors too small to be detected in the guidescope/laptop might be visible in the final image. I also had difficulty adjusting the alignment of the heavy TV OTA in order to find a suitably bright nearby guide star and the whole system was taxing the LX90 capacity and also difficult to balance. Despite some success with M57, I was happier with unguided imaging although using the SCT finderscope calibrated to the distance of two full moons to determine polar alignment was not as accurate as I hoped for and I was restricted to very short 15 second exposures of M27. The large aperture and H alpha sensitivity of the 300D gave decent results and stacking multiple exposures can yield the results on a single longer exposure. 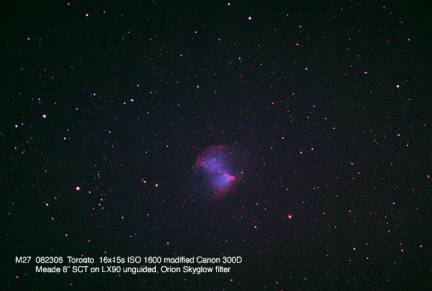 However there is a significant time expenditure in taking, processing and stacking multiple exposures:

I also felt that this system was not within the spirit of budget astroimaging, not particularly portable for dark site imaging and not well suited to the many wide field DSOs. I think the big LX90 will be relegated to planetary imaging and small DSOs.

I picked up an early 80s vintage Vixen Polaris GEM mount in remarkable condition with the all important original Vixen wood tripod legs good for dampening vibrations. This is really the precursor to the current Chinese EQ3/CG5 mounts but the Polaris exhibits much finer manufacturing tolerances and subsequently tracks smoother with less PE. I purchased a Meade 492 DS motor system, flashed an old Autostar 495 handset to 497 specs, and retrofitted the motors onto the Vixen Polaris to gain full Autostar GOTO capability and tracking. 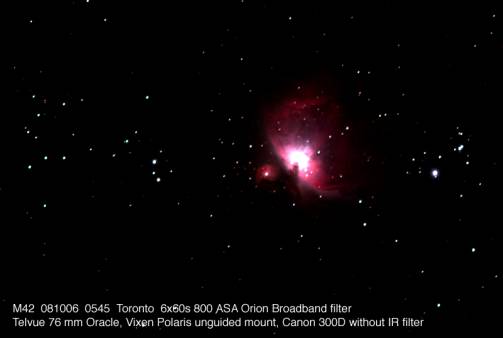 The above is a stack of six 1 minute exposures with many thrown out spoiled by PE type star trails.

By autoguiding through a cheap 500 mm photographic telephoto lens we can get better results. Autoguiding compensates for PE allowing more usable shots from a given night and fourteen 2 minute exposures were stacked. I have a forty minute window by which M42 clears my roof line before disappearing behind my neighbour's tree! The results are not breathtakingly better because M42 was imaged under the glare of this month's full moon ? we haven't had many clear nights this winter. Even with the improved contrast of the Orion Broadband filter, light pollution in the heart of Toronto is very intense and dark site imaging in the countryside is necessary to bring out all the filamentous detail as well as nearby Running Man. 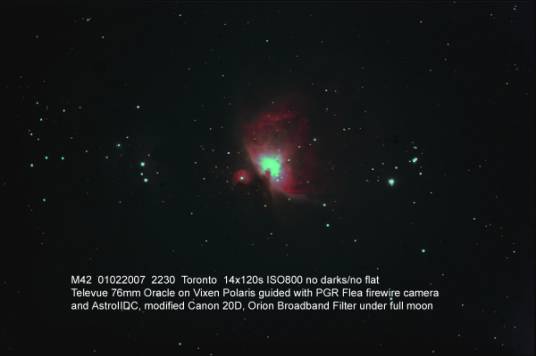 So the final cost breakdown is:


Economical DSO imaging can be attained and images only dreamt of a generation ago achieved by both amateur and novice.