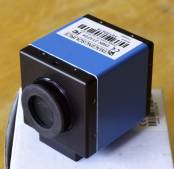 My name is Levi and I live 45 miles north of Los Angeles, CA. The seeing conditions here can be terrible with the ocean only a few miles away and the light pollution from living in such a populated area. The interaction between the cold ocean and the warm land mass at night make for very foggy situations at times.

My first scope was a K-Mart Tasco I received for Christmas when I was 12. The scope derailed my enthusiasm for a number of years till I was older and able to afford a Celestron 6" Newtonian. Within a year of getting the Newtonian I traded up to an Ultima C-8 in the early 90's which I still use, more and more frequently. Recently purchased for a planned backyard observatory was a CGE 1400 Fastar compatible and a William Oh's 80mm Limited Edition Semi APO refractor.

I love all kinds of scopes and equipment and really don't have any bias towards this type or that type. The biggest issue I face is affordability. Sure, I want the best but have to settle for the best I can afford. I've always liked my Ultima C-8 and the views it delivered. Would probably like a Starfire 8" refractor just as much if not more, but again it boils down to what I can afford. Since my main interests are imaging I went for aperture and ease of use when I purchased the CGE 1400 along with the goto, tracking, ASCOM compliant mount and Celestrons reputation for quality optics.

My first ventures into astroimaging involved film and the dismal results and cost of film and developing soon shut me down. Fast forward to now and the digital revolution is well under way and my interest in astroimaging has been rediscovered. I purchased a NexImage several months ago for $89.00 during a sale and have been having lots of fun with it. After being a CN member here for several months and seeing all the awesome images others were posting I decided to move up the imaging ladder a notch or two.

My first inclination was for one of the new USB2 cameras recently hitting the market for around $1,000.00. After using the NexImage, I was familiar with USB2 and the process involved in capturing with AMCAP and processing with Registax. I also liked the idea of "plug n playÓ too. I hate having to deal with drivers and hooking up stubborn hardware. After researching the USB2 offerings I found one I liked, the Lumenera LU075 Monochrome Camera. Unfortunately the high end capture software was not included and was an additional $500.00. My budget was climbing as going the mono camera route also required filters and a filter wheel for getting color shots of planets. I choose the mono CCD because of it's increased sensitivity over a color camera with a similar CCD chip. Also seeing that the majority of the really good planetary images posted on CN were done with a mono CCD camera of some type had lots to do with it too. Well, what to do?? My budget was getting to the point that I couldn't afford to step up the imaging ladder.

I e-mailed Chris Go, a fellow CN'er, who recently discovered " Red Jr" and asked him his opinion. Chris suggested I look into Firewire CCD cameras as he was using the same and having awesome results. So began my research into Firewire cameras and it became a USB2 vs Firewire kinda thing. I just wanted to get all the info I could so when I finally shelled out the bucks I wouldn't have any regrets

At first I was bummed , after reading this in a USB2 ad, "The USB 2.0 digital interface ensures a simple plug and play installation ? and one standard cable minimizes camera clutter. No framegrabber required". I figured more stuff to buy and more cables in the way. Then after further research I discovered only one cable would go from the Firewire camera on the scope to the PC via a Y connection shown below. No frame grabber was required for digital firewire cameras, only a 6 pin (power supplied) or 4 pin (Y adapter needed) IEEE 1394 port is required. Most newer laptops have this feature built in because of video editing being so popular.

The Firewire camera was $490.00 with capture software included! My budget was back on track. The Firewire camera, DMK21AF04 specifications and the Lumenera camera, LU075 Monochrome specifications were compared and I ended up going the Firewire route after a little more research. An excerpt from Wikipedia on Firewire statesÓ Firewire makes full use of all SCSI capabilities and, compared to USB 2.0 High Speed, has higher sustained data transfer rates.Ó Ò With this new technology, Firewire, which was arguably already slightly faster, is now substantially faster than Hi-Speed USBÓ. You can make your own comparisons and conclusions. For me it was based on budget and performance and I really feel I made the right choice for my needs.

The camera setup went without any problems at all. First I had to upgrade DirectX to 9c version. I hooked up the camera to the laptop IEEE 1934 socket, plugged in the power to the camera and put in the CD with the drivers. Now here's where I crossed my fingers, said a prayer and started chanting. There was no need, I clicked on the driver and it loaded, clicked on IC Capture software and it loaded. No problems at all encountered. Next I fired up the capture software and started testing the DMK. The capture software is pretty awesome, all kinds of camera controls like gain, FPS, gamma, exposure, brightness, different codec's can be selected and one of my favorite things is a sequence of images can be setup. Simply open the imaging sequence dialog box, type in name of sequence, "Saturn", for example and first image number, "1" and start capturing. Every time you hit the record button it automatically sequences the next capture without you having to type in anything. If you decide to capture Jupiter later on just reopen the sequence dialog and type in "Jupiter" and image number "1" and off you go. The capture software comes with an extensive help file and was written in such a way that I was capturing within minutes of having everything setup. Another thing I really like is the zoom function. Makes it easy to zoom in or out on the planet and check focus or how much area the planet is covering on the CCD chip. All settings can be made with a sliding scale or incrementally by clicking on small up or down arrows and all settings are displayed numerically too. This makes it easy to document and return to previous settings. The duration of the AVI can also be controlled by setting the Auto Stops for Frame Limit or Time Limit. I use Frame Limit to keep the frames to a number Registax can handle easily. The ability to do uncompressed video is especially nice also.

There are so many codec's supported I had to do a little testing to find one Registax is compatible with. For now I'm using Y800 color format with Unspecified selected as codec to get uncompressed imaging. Another thing found was in Registax you have to sometimes play with the settings in Area of pixels in the Processing box to get it to track properly. The only glitch I can report is sometimes when using the capture software the live display box will disappear. It's a simple matter to go to Window and scroll to and click Tile Vertically and it pops back on screen.

The DMK is very well made, metal body, comes with a female T-thread adapter mounted for tripod use, lens cap and capture software included. The camera is made for industrial applications and has a very nice feel to it. Some more specs the company provided are:

The 1935Imaging company the DMK was purchased from was very helpful, knowledgeable, friendly and returned e-mails and phone calls promptly. I will definitely be doing more business with them in the future.

The first night imaging was available was between storms rolling through the area. I had been playing with and testing the camera with a William Oh's 80mm by pointing it through the office door at cookbooks in the kitchen. Needless to say, after 5 straight days of rain, I was really ready to image something other than 100 Bar B Q Recipes. The scope used for testing, a C-8, was setup 4 hours prior to imaging for cool down. The Moon was up so it became the first easy test target. Twenty five AVI's were made and I wasn't expecting much my first time out with this camera. The conditions were less than ideal and the Moons' surface was wavering in and out of focus due to high altitude winds.

Much to my surprise this image came to life in Registax and is the best I've ever processed of the Moon. 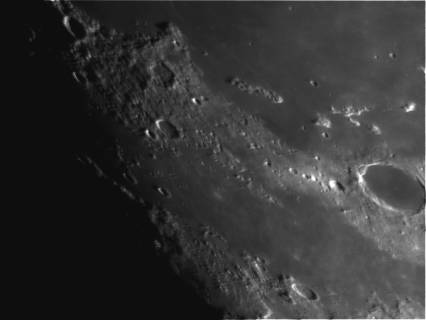 The Moon imaging went well so I tried for Jupiter. Thirty AVI's were made and this one is my best image ever of Jupiter.

I have to admit that all the testing done on the cookbooks paid off.

I'm very happy with the DMK camera and the initial results I've gotten and look forward to hooking up the Atik Filter Wheel and trying my hand at processing color images using L,R,G,B filters.
Thanks much for reading this and CLEAR SKIES!