Part I: Build your own ultrafast and ultracompact refractor for under $30

My original concept was to present an alternative and inexpensive method of CCD imaging along with useful tips to implement it. As I collected thoughts and images it occurred to me that I could expand the topic into a broad discourse about astronomy on a budget for ambitious amateurs. This became a three part article of which the last part has not yet been written.

I am both a cheap and ambitious amateur astronomer who really started in earnest with the 2004 Venus transit. My Dad purchased my first scope. It was a discounted K-Mart Tasco refractor with a fixed eyepiece and a fixed table top tripod. It never even occurred to me to point it skyward. Ten years ago my wife bought me a TeleVue Ranger 70 mm refractor for Christmas which we used as a spotting scope to spy on sailboats and bald eagles. We were living just outside of Vancouver on a peninsula known as the Sunshine Coast so the North Shore mountains shielded us from most of the city's light pollution. In addition to dark skies we had beachfront property and enjoyed a SW unobstructed horizon . During the first few months of my son's life I recall the vivid spectacle of comet Hale-Bopp from our driveway. In spite of all these circumstances I again failed to point my scope skyward. Something was clearly wrong with me.

Fast forward eight years and I now live in the heart of Toronto where I have to drive an hour just to reach a moderately dark viewing site and my personal time is forever diminishing. This makes astronomy particularly well suited for the family man because the entire night becomes free as the household lies subdued in bed, at least until the teenage years.
While putting away my son's Sherlock Holmes costume I came across his 4" acrylic magnifying glass which I reasoned could act as an objective cell if I cut off the handle. PVC and ABS drainage pipe couplers were purchase from Home Depot to act as the optical tube and dew shield and required no modification as drain pipe is standardized at 4" diameter. 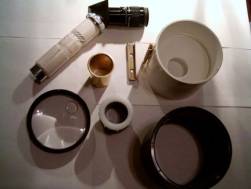 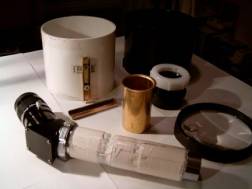 Other plumbing pieces made up the visual back and a focusing drawtube. Duct tape was wrapped around the 1 1/4" chromed metal pipe to create a friction fit within the 1 1/2" brass pipe. A dove tail mount was created using bed frame hardware and attached to a Manfrotto tripod. I had a spare erecting prism but you could mount the eyepiece in prime focal fashion which is popular amongst Japanese enthusiasts.

Using high school physics I determined the focal length to be 335 mm which is so short that I only needed one PVC coupler to act as the optical tube, I had bought several thinking I needed to duct tape them together to create the necessary length. The aperture is 93mm for a fast focal ratio of f/3.6. Ultrafast and ultracompact. 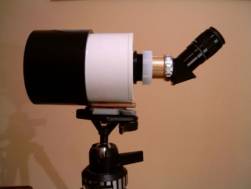 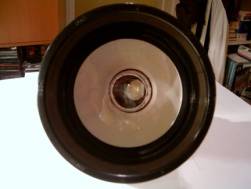 In the field it does suffer from lack of baffling and significant internal reflections/glare arising from the polished brass drawtube. Images are not refractor sharp due to the poor optical properties of the lens and I suspect significant chromatic aberration.

The scope serves as a starting point for further refinement and to demonstrate the feasibility of building a supremely compact, rugged large aperture unobstructed scope for DSO viewing ? on the cheap. My son no longer feels left out either!

Webcam astroimaging has been popularized over the past decade with Phillips Toucam and Logitech Quickcam Pro models often with home brewed hardware modifications to prolong exposure. All effective webcams use some variant of Sony's 1/4" ICX098BQ CCD due to its excellent low light sensitivity. There certainly is no cheaper way to implement CCD imaging.

Early webcams communicated via parallel interfaces later supplanted by faster USB. Apple in the mid 1990s developed the six pin IEEE 1394 protocol ("Firewire") to replace the SCSI parallel interface and allows data transfers of 400 Mbs (megabits/s). This is effectively faster than even USB2 and Firewire 800 is already in the marketplace. This has become the standard for DV editing and can be found on all Macintosh laptops. It has not become commonplace amongst Wintel machines which is another reason I wanted to write this article.

The importance of fast data transfer is that it allows both uncompressed image data transfer and high frame per second exposure rates (> 30 fps) to coexist. Raw data does not suffer from image detail loss due to compression and high exposure rates allow one to capture the maximum number of frames during brief periods of exquisite seeing and thereby increases the number of stackable images which in turn reduces the level of random noise in the image. One can literally produce an image better than what can be seen visually through an eyepiece.

Astro IIDC is wonderful piece of software written by a fellow Canadian specifically for astroimaging with firewire cameras. By communicating directly with the camera (hence no camera specific drivers are required) the software is able to coax cheap webcams to exposure in excess of 1 full second. More expensive industrial firewire cameras used for machine vision applications are able to expose for scores of minutes. Most importantly this is achieved without any hardware modification. Astro IIDC also comes with the easiest and most intuitive stacking utility that also auto aligns each frame and is so code optimized that I can process 15,000 frames, select the number of the sharpest frames I want to keep and stack them into a final image within fifteen minutes. Since Apple announced a few months ago a switch to Intel CPUs, there are already Wintel machines running a hacked version of Apple's OSX operating system. I suspect that legitimate OSX licences will be an option for PCs shortly and Astro IIDC will be available for all to appreciate.

Enough with the preamble. Let me describe my setup which once again reflects decisions based solely on value for money.

Precise Focus - No amount of post processing or optical quality will compensate for a poorly focused image. Purists will opt for the mechanically elegant two speed focuser such as a Feathertouch or a purpose made helical focuser installed in series with the scope's standard focuser. The cheap alternative is JMI's venerable Motofocuser - a reduction geared electrical motor running off of a 9V battery allowing incremental fine control of the stock focuser. 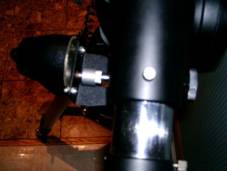 Without it everytime time you rotate the focuser you jar the scope and the images slips right off the laptop screen.

Steady Mount - I prefer Alt Azimuth mounts to GEM because it's cheaper and faster to setup. It's conceivable that a mechanical AltAz with slow motion controls could be used by a sufficiently talented individual but I think a motor driven mount is necessary to keep the target centered on that very small CCD chip. Regardless of the mounting style it must be stable and able to dissipate vibrations quickly and also be able to support the weight of scope. You do not want to compound atmospheric turbulence. My mount is a decapitated Synta AZ3 tripod attached to a Meade DSX Autostar enabled single sided fork. I fashioned a mounting plate from a piece of s**** metal and the tall DSX fork allows my refractor plenty of room to swing to the zenith. The Autostar Goto system can automatically track my target with the occasionally manual correction. This is a budget compromised fork system than will exhibit much more error then a good polar aligned EQ mount and is not suitable for DSO imaging.

Instead of the customary two star align method I use this shortcut. Level the scope, then center the image target, select the object in the Autostar menu then direct sync on the object. It's not perfect and requires periodic manual correction but it's fast and gets you imaging sooner which is what counts. 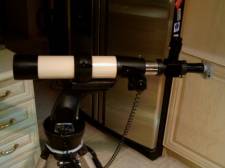 High Quality Optics - Over the years I traded up from my TV Ranger to the now defunct 76 mm TV Oracle which boasts a true apochromatic triplet element lens. There will always be a debate as to which design of scope is the optimal and perhaps the truth is that there is no perfect scope. However, the most appropriate scope is the one that will see the most use and in this there is no substitute for a compact and fast apo refractor that allows you to view both wide field DSO and planetary without waiting for cool down and is rugged enough to throw in your backpack without worrying about collimation issues. No other design is able to produce high contrast and pinpoint star images either. In Part III, I do take some exception to this opinion only in regards to imaging. In this special circumstance the old adage that aperture rules really does apply.

Viewing chair - Someone once equated the use of a viewing chair to having an extra inch of aperture. Being able to sit relaxed at the proper height for viewing is vital because it allows you to concentrate on the fine motor control required for focusing and image targeting. I made mine from Internet plans during one summer evening and the only modification I made was to simplify the design by replacing the hinge brace with a length of rope in the fashion of an artist easel. 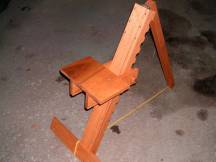 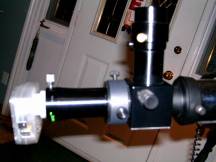 Flip Mirror and Reticle Eyepiece : Absolutely necessary because it lets you quickly align your astronomical target onto that tiny CCD chip. With my short focal length refractor I required the use of a Televue 5x Powermate to increase the size of my images which reduces the FOV so greatly that you don't know which direction to move the scope to see the image. With experience you learn where to place the target relative to the reticle crosshairs. Even with the reticle and flip mirror the first time out it took me more than an hour just to get my target onto the CCD.

IR blocking filter - planets tends to emit a great deal of IR radiation and CCD tend to be very sensitive to this spectra. Without a filter the red color channel will become supersaturated and the image blurred. The B+W 486 IR/UV blocking filter doesn't block UV/IR wavelengths through absorption but by the interference of its multicoatings so there are no transmission losses. For the same reason it's best to image at prime focus and not via eyepiece projection.

Firewire Webcam ? There used to be half a dozen firewire webcam manufacturers but the introduction of Apple's own iSight eliminated the rest of the field. Paradoxically the iSight cannot be used with Astro IIDC because it does not conform to industry standard protocols. Used or NIB webcams can still be found. I adapted the Unibrain webcam to fit 1 1/4" eyepiece diameter by unscrewing the original lens element and screwing in an electrical conduit coupler - also from Home Depot. 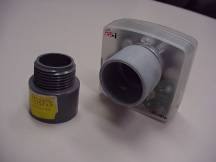 To date I have only been doing planetary imaging of Mars and the Moon and only over the past month. My initial mistakes involved focusing issues and overexposing my images. It is better to underexpose because surface details are lost with overexposure. My next target is Saturn. One could image DSOs by summing multiple one second exposures to get the equivalent single long exposure but I suspect that the increased noise would make it unacceptable. A more expensive firewire camera and mount are probably required. 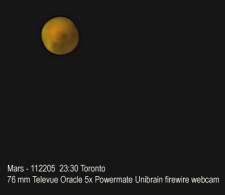 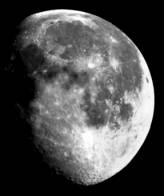 All items were bought online and second hand through two websites familiar to all readers. The cost breakdown is as follows: 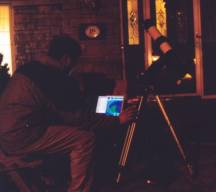