My home base is plagued by light pollution and after some "bench testing" for filter factors and such,  I decided it was time to try things out on a real astro target. I picked M42 in Orion because it is the brightest nebula in the night sky; hence fairly easy to record something of it almost no matter how much light pollution one has, yet at the same time it is a difficult target because it has some very faint tendrils. In particular it is fairly difficult to record the southern loop from light polluted sites, or the Running Man to its north. Of course, testing these things on a real target is never very straightforward. A lot of astro-imaging depends on the post-processing to bring out the hidden beauty or whatever. To allow each filter to demonstrate its best did not allow the use of either identical capture procedures nor identical post processing. This write-up is rather long because the imaging system is complex, but IMHO well worth a careful read when you are ready to spend between $100 and $700 in placing an order for a filter. It's OK to have a quick peruse now, jump to the conclusions at the bottom and come back later when your credit card is itching to pay up :-)

Camera used is  a Hutech modified Canon 20D with clear glass having anti-reflection coatings over the sensor. I.e. it is sensitive to all wavelengths between 400nm and 950nm. The response of the stock, unmodified 20D tapers off around 650nm. Human visual response behaves similarly. There is no sharp cutoff, just a steady tapering off. The bright spectral lines in many nebulae tend to be, from short to long wavelengths, H-beta (486.1nm), OIII (doublet, at 495.9nm and 500.7nm) in Blue/Green, and H-alpha (656.3nm) and SII (doublet, at 671.9 and 673.0nm) in deep Red. It's obvious therefore that the stock 20D is quite insensitive to the most important line of the whole lot, H-alpha. Infra Red is often taken to be wavelengths longer than, say, 700nm. All exposures used the same OTA (Canon 600mm/4.0L IS lens at f4), and were of the same length, 3 minutes each, shot quickly after each other. Why 3 minutes? Because there was so much light pollution that using 5 minutes at my lowest ISO, 100, would wash out the frames shot without any filter.  Each filter was used for 3 frames for later stacking. Why 3 frames with each filter? Because I did not wish to do any dark subtraction (too many ISO settings) and stacking 3 frames should minimize the obviousness of hot pixels through the stacking process. I used Min-Max Excluded Average in ImagesPlus for stacking. Nevertheless I did do dark subtraction for the ISO 1600 frames shot through the H-alpha filter. The temperature was 28deg C and the pepper was starting to show up. No flat fielding. The objective did not include getting a pretty picture. The objective was to answer the question: If you had 9 minutes to shoot this target at this site with this much light pollution, which filter should you use? To get a decent image of M42, even at a dark site, would require an integration time of one to 5 hours and an assortment of exposure lengths (because of the enormous dynamic range of the target).

Mount used is an AP1200 with a tandem bar holding the Canon lens + 20D on one side and a C14 on the other. I used the C14 with a 0.63 focal reducer as the guide scope. What? You object to large guide scopes? It worked fine. Autoguider was an ST-402ME. I slewed to center Betelgeuse in the camera viewfinder, installed a filter, autofocused, and then slewed back to M42. Took 3x3minute exposures, then slewed back to Betelgeuse for the next filter and autofocus click. The camera autofocused reliably through all the filters, including the deep red H-alpha which gave a very dim view through the viewfinder, and even the 89B that gives a totally black viewfinder, even in sunlight! I could not detect any undue star bloat when I shot visible+IR wavelengths in one go, a commendable APO performance of my favorite "astrograph" :-)

Some description of the various filters. I had two locations for inserting filters:

Hence it is easy to use two filters simultaneously, provided they are in the appropriate rings. A run-down on the filters, the hyperlinks supply more data:

ISO was set individually for each filter, such that the skyfog level on the back-of-camera histogram fell somewhere between a third and two thirds up. It was thought that this would give each filter the opportunity of delivering at its optimum. The skyfog was measured (see here for how) at Visual Limiting Magnitude 3.6 at the start of the exposures, but as Orion moved away from the meridian the skyfog background increased to VLMag 3.3. For the record, here are the ISOs used; a high ISO implies that the filter was blocking the skyfog much better than a filter used with lower ISO:

So, how on Earth do we present the results?! For starters let us have a look at what you can expect if ISO 400 was used for all the filters. This should give you a feel for how much blocking of the skyfog actually takes place with each filter. I used the frames as exposed at the various ISOs and converted nonLinearly (as for normal photography) from Raw with "Exposure Compensation" of one or two f-stops, either up or down, to get the equivalent of ISO 400 in a Jpeg capture. So here is the simulated back-of-camera LCD view for a 3-minute exposure at ISO 400 for each filter: 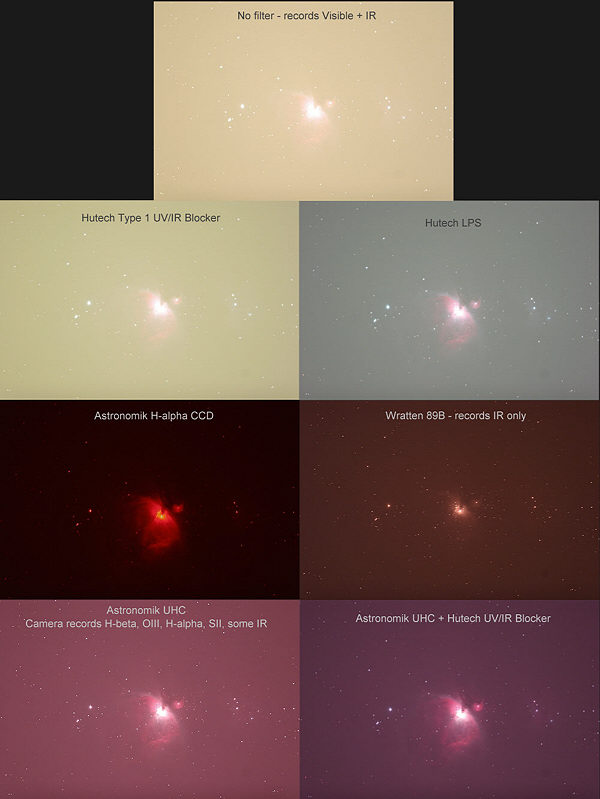 Of course, what matters is how much of the nebula can actually be discerned, and perhaps it is easier to appreciate the relative contrast without the added confusion of changes in the colour of the skyfog. So here are the same frames presented in monochrome: 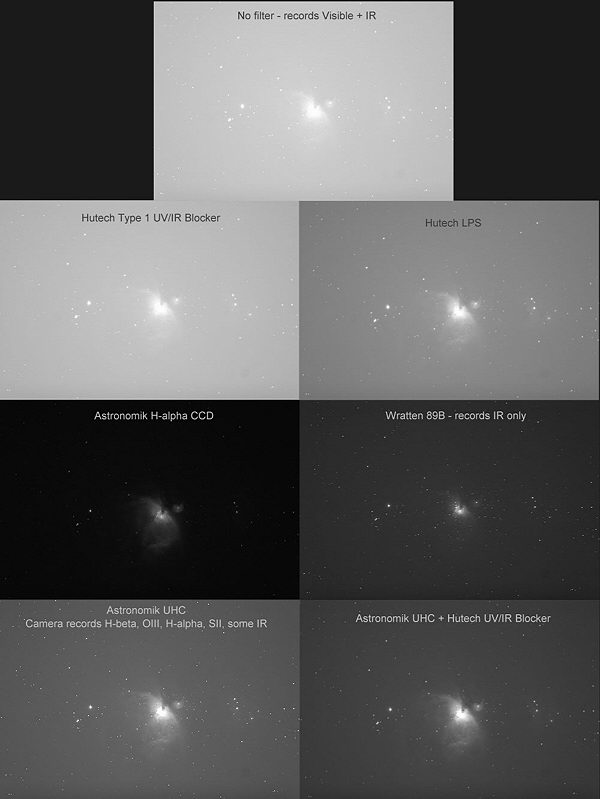 Results after Stacking and Post-Processing

In some ways the IR component obfuscates matters. From previous measurements I already knew that my skyfog is a lot dimmer in IR than it is in visible light. Unfortunately it turns out that M42 is also very poor in IR. So admitting IR onto the sensor is useful only when imaging white light sources, star clusters, galaxies and planets. The modded 20D then becomes much more responsive, leading to shorter exposures, but of little use in imaging nebulae like M42 that are poor in IR. From the above frames it is immediately obvious that the LPS-P2 does filter out the skyfog quite significantly and it does increase the visibility of M42. But both the H-alpha and the UHC filters do a considerably better job. Below is an attempt to show what a reasonable effort at post-processing can yield. This is not the ultimate that can be coaxed out of each set of 3 frames stacked (life is too short to spend that much time on so many sets!) but a reasonable go nevertheless. I cropped the frames to be able to bring you a bit closer to the action: 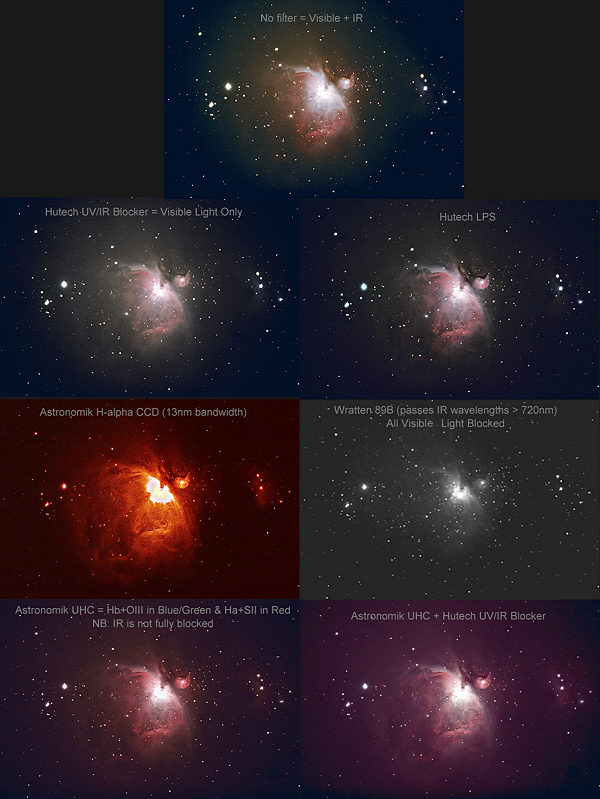 So, what can we conclude? 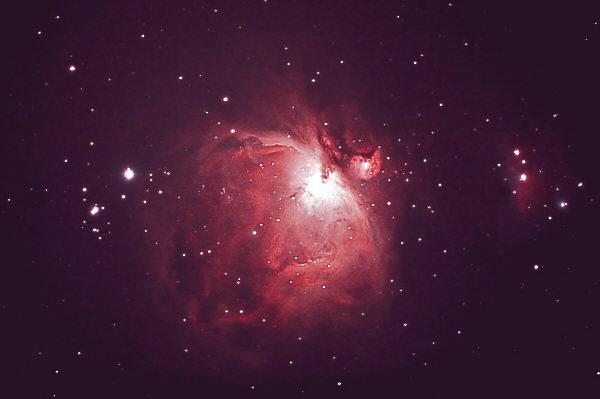 At least now that southern loop is better defined, but since the integration time is nowhere near adequate I had to apply a good dollop of Gaussian blur to hide some of the noise. Could I have achieved a better result if I had shot the whole 18 minutes through the UHC+UV/IR Blocker, rather than spend 9 of those minutes with the Ha? We may never know... Processing these frames, with insufficient integration time for the sky conditions, remains a temptation to have yet another go. You always have to make a delicate choice between showing more tendrils (and noise) or a slightly darker result with less noise. As mentioned earlier, I was not chasing a pretty picture, merely identifying the best filter to use under that much skyfog. The answer is that Astronomik UHC+UV/IR Blocker combination. If time permits, a boost in the Red channel by shooting H-alpha would not go amiss. By the way, I recently did shoot the Trapezium with no filter at all (i.e. including IR) at a much longer focal length (4125mm) for yet another test, using 15-second unguided exposures. Since no filter was employed, one can  use quite short exposures. So one should not write off the no-filter option altogether. So is the 13nm Bandwidth H-alpha satisfactory?

My feeling is that the 13nm bandwidth is too wide for my sky conditions and very likely the new Astronomik 6nm filter might do a noticeably better job. But then, would the camera's autofocus still function? OK, that's important only for those lazies like me who use the camera's autofocus. I just love that single-click autofocus! Anyway, at the end of all the above acquisitions I thought I'd have a go at the Rosette. Here are the Jpeg captures of a 5-minute exposure at ISO 1600 on the left and a 20-minute exposure at ISO 400 on the right, both at f4; basically simulated back-of-camera LCD views. The 20-minute exposure is slightly brighter because of thermal noise in all the RGB channels, not dark-subtracted and with an ambient temperature of 28deg C (and that's a midnight in our mid-winter!):

Rather obvious that the skyfog has not been cut back sufficiently by that 13nm H-alpha filter! Trust me, the Rosette is buried in there somewhere ;-) Here it is after some aggressive processing of the 2 frames combined (weighted), but unfortunately without dark subtraction, so lots of salt and pepper! 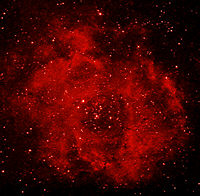 And the Ideal Filter for Heavy Light Pollution is:

Really, really narrowband. IMHO 13nm is too wide for an H-alpha filter in a VLMag 3.5 sky. If I was buying new today I'd jump onto something considerably narrower. The duotone filters that try to capture both H-alpha (in deep Red) and OIII (in Blue/Green) are particularly attractive for one-shot colour cameras and DSLRs. Some so-called UHC filters do chase these two spectral lines. Some do not, so do verify before ordering a "UHC". Both the Astronomik UHC and Hutech's LPS-P3 (the one used above is the LPS-P2) have two  passbands; in my opinion not narrow enough for high light pollution. However, one is faced with certain realities. To cover both H-beta and OIII we require a bandwidth of at least 20nm. With fabrication tolerances I suspect it would be difficult to deliver less than 30nm and still retain high transmission on both spectral lines, so perhaps the best that current technology allows is the 40nm delivered by the Astronomik UHC. The LPS-P3 delivers a 75nm bandwidth in Blue/Green, a factor 2x too wide. The same minimum passband of 20nm is also necessary for the deep red H-alpha and SII, hence again we seem to end up with 40nm as a bandwidth that can actually be fabricated. I feel that the 40+nm bandwidths are too wide for my VLMag 3.5 sky. So what can be done for those who have to live with this much light pollution? Perhaps we have to sacrifice H-beta and SII. Both these lines are weak in most nebulae. A duotone filter with two <10nm bandwidths, one centered on OIII and one on H-alpha should be very attractive for conditions of high light pollution. Basically it would allow two narrowband captures simultaneously in any one-shot colour astroCCD or a DSLR. Anybody care to market such a filter?

Guidance for a Newbie with a DSLR:

These are my conclusions from the above tests. I have tried to provide as much data as necessary to enable the reader to arrive at his/her own conclusions. So it's up to you as to how you interpret all the above. Hope it's of some help... Would appreciate hearing if your conclusions differ from mine. Drop me an email.