Beginner Series: How to Setup a Dob 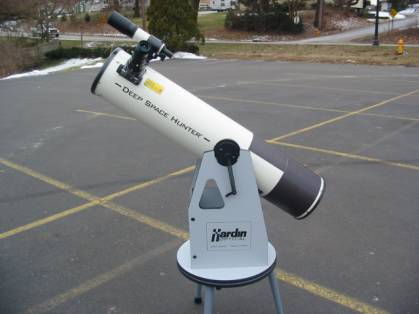 This series of articles is intended to familiarize folks who are in the process of choosing a telescope with the setup procedures required by some of the popular types of instruments available. It is hoped that these descriptions will help a budding astronomer to choose gear that is suited to his needs and observing style, and to avoid surprises when learning of the type and degree of effort required by his new acquisition. Because of this, the article is general in nature and shouldn't be relied upon to enumerate each and every step required for best operation of any given instrument.

These are very common telescopes, and are frequently recommended as a person's first telescope for a number of reasons. They are uncomplicated to set up, initially requiring no understanding of the celestial coordinate system. They offer the most optical quality and aperture of any common instrument for a given price.

Common examples include the Celestron Starhopper, the Hardin Deep Space Hunter, the Orion Sky Quest, and many others. The most common apertures found at entry level are in the 6" to 12" range, though some exist which are larger or smaller.

(1) A Newtonian optical tube consisting of a solid tube of either steel or Sonotube (fiberglass-coated cardboard) with a parabolic primary mirror at one end, a smaller, flat but tilted secondary mirror near the other, and a focuser extending out the side of tube near the secondary mirror. 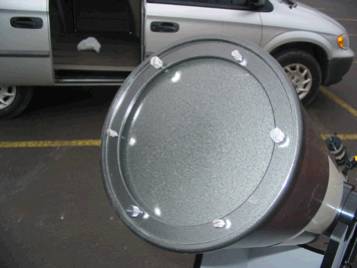 Note that, although in  this photo the telescope is pointed downward, it's not prudent to do so unless you have first verified that the type of primary cell used provides positive retention of the mirror. The primary cells used in some Newtonians would permit the mirror to fall if placed in this position. 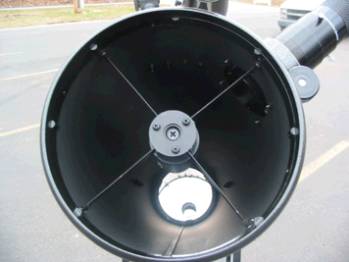 (2) Disk-shaped elevation bearings fixed to this tube on opposite sides near the balance point as seen in the next photo. 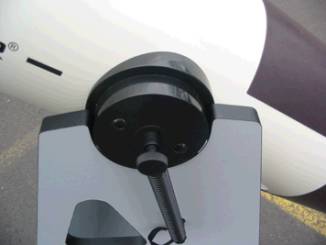 ELEVATION BEARING DISK ON SIDE OF TUBE 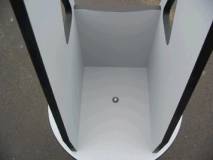 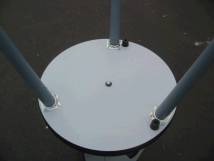 AZIMUTH PIVOT:  INSIDE ROCKERBOX, UNDER GROUNDBOARD 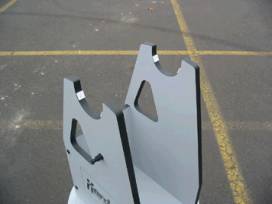 Because the optical tube can swing freely in elevation (vertical motion) and the rocker box can spin freely in azimuth (horizontal motion), the telescope can easily be pointed to any area of the sky.

NOTE: Make certain that the Sun is not permitted to shine into the open top of the tube while assembling the telescope! Keep it covered - and then be sure not to aim it at the Sun anyway, just in case.

Setting Up the Base or Tripod

Installing the Optical Tube or Mount 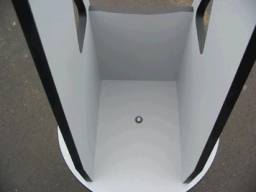 The top of the tube is usually determined by the location of the focuser and finderscope. The focuser is sometimes directly in line with the bearing; if this is the case it could be used in either orientation - but if the finder winds up on the bottom it'll be very inconvenient later! 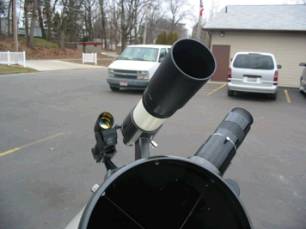 Astronomy Club of Akron member Mark North (no newbie) provided the telescope for these photos and also agreed to act as a model in the following series: 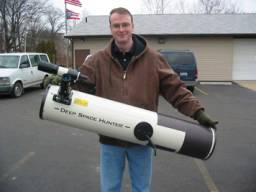 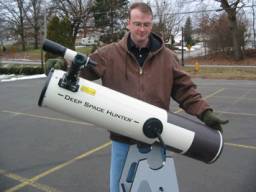 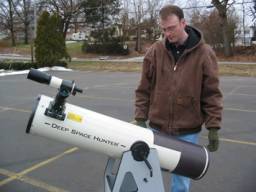 Now it's a telescope, but we have some things to check before it's ready for use. First, we take a quick look at collimation. 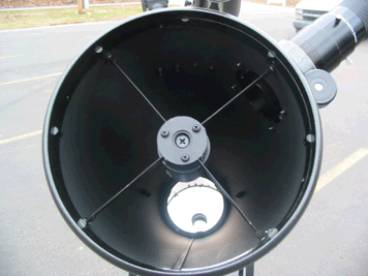 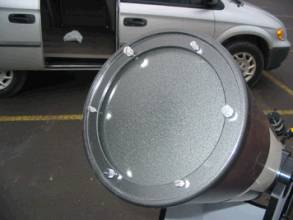 We aren't going to spend much time on collimation this first night; I'll make sure it's close enough to provide great views and will direct the owner to some resources on the subject so he can learn to do it himself another night. For further info on Newtonian collimation, see the following:

Next, the finder(s) must be aligned. Without proper finder alignment it'll be very difficult to find objects in the main telescope.  In the photos above, the telescope is equipped with both a red dot, unity finder (RDF) and a magnifying finderscope. It's more usual to have only one or the other, and the magnifying finderscope is the one more commonly found on telescopes of this type. The procedure is the same either way - adjustment screws are provided to permit the unit to be aligned with the main telescope. The easy way, if it's not yet dark, is to find a terrestrial target at least 100 yards away and, with the longest focal length eyepiece available inserted into the focuser, to point the telescope toward the object while looking into the eyepiece. It should be easy enough to find the object that way. Then adjust the focuser for the sharpest image and carefully move the telescope until the image is in the center of the field. Without moving the main telescope, now look through the finderscope. If it's close to alignment the object will be visible but not centered. Using the setscrews on the finderscope mount, adjust it until the same object is centered (though much smaller) in that field of view. If it's dark, I suggest using Polaris instead. Polaris is frequently chosen because it is nearly stationary and thus won't move while you are trying to adjust the finder.

At this point, the telescope is ready for observing. I recommend suggesting a number of easy objects that can be seen from that location at that time. I wouldn't choose the sort of faint fuzzies so dear to experienced amateurs - remember the newbie doesn't have those observing skills. It's likely that (1) he won't see them at all and (2) even if he does see them he'll be disappointed in his new telescope. Show him the crowd-pleasers. After all, he's probably never seen them - and certainly not in his new scope!

GOOD TARGETS FOR A TUBE DOBSONIAN

Because there are no lenses to introduce chromatic aberration there's no need to avoid the brighter objects. On the other hand, since entry-level Dobs never have tracking, inexperienced operators will tend to have trouble keeping up with the planets at high magnifications. Take a peek, by all means, but I wouldn't spend too long on them. What the dobs do best is to present nice wide images of deep sky objects of reasonable apparent size.  Keep the magnification down to 100X or so at first so the operator can learn to track objects. Big globulars, open clusters, and areas of bright nebulosity will give the new telescope owner a good first-light experience. If the site is excellent, some galaxy clusters might be in order.

Alert readers will have observed that Mark has made some useful modifications to his telescope. He has added legs to the bottom of the ground board to lift the telescope to a more convenient height for his observing style. He has added a red dot finder to use in addition to the standard magnifying finderscope. Finally, the dark material visible on the outside of the optical near the bottom are magnetic sheets which are attracted to the steel tube. They are used to help balance the weight of the extra finder and the large eyepieces he often uses.

It's not unusual to hear the following question when visiting our Club's observing site:

"Hey, Mister - can you help me set up my new telescope?"

The correct initial response is, of course,  "Sure!", followed by questions intended to determine the type of gear involved and the degree of familiarity with it that is possessed by the proud owner. Is it an EQ mount? Does he know what that means? Has he read the manual? Has he at least BROUGHT the manual? Did he remember to bring eyepieces? Which ones?

Your job is to be ready and able to clearly explain whatever he doesn't yet understand, and to have with you and available for lending whatever parts and pieces he may need but didn't bring. Show him what his telescope can do and help get him off to a successful beginning with his new instrument.

The new user brings out a telescope you don't like and don't think much of.  Your initial comment should be:

A)   What a piece of trash - you wasted your money!

Let's  set this up and see what objects we can observe tonight.

If you got it wrong (or are even wondering what the correct response is), please do both the astronomy community and the new owner a favor and just stay to yourself, OK?

All photographs in this article are my property and permission is granted to Cloudy Nights for their use in conjunction with this article. I have no commercial relationship with Hardin Optical or any of their dealers, nor with any other firms mentioned in this article.