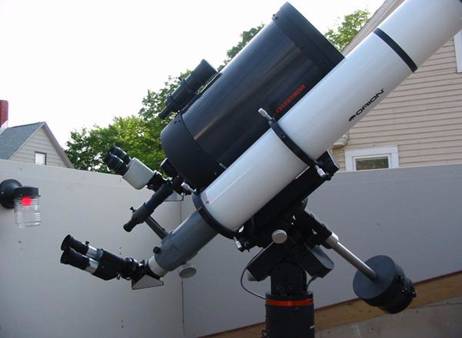 Binoviewers are becoming a very popular accessory for telescope users. They offer several advantages over single-eyed viewing, at the cost of a few disadvantages. Some of these effects are subtle, while others are more important.

Some characteristics of binoviewing are the same as with conventional binocular use. The primary feature of binoviewing is that it fits the way our brains process visual information better than single-eyed (Cyclops) viewing. This is true both of binoviewers and binoculars, and is one reason that conventional binoculars are so popular in astronomy. Most users find that objects or starfields appear three dimensional. Because of the narrow spacing of the objectives, binoculars do not provide true depth perception; the brain is fooled into thinking it’s there. The same effect is observed with binoviewers for the same reason. Another effect is that bringing the same information into both eyes permits the brain to process the information differently, making subtle details more apparent. User comfort is also a very important feature of any two-eyed viewing system. It’s much more relaxing to observe with both eyes than to either ignore or close one eye.

Other binoviewer characteristics aren’t shared by binoculars. One feature of binoviewers that’s not generally a factor with binoculars is the suppression of “floaters” when a small exit pupil is being used. Floaters are bits of organic matter floating within the fluid in the eyeball. At small exit pupils these can be distracting. With binoviewers the brain can receive the same celestial view from both eyes and cancel out the floaters in each. Astigmatism is another effect noticed by many observers when using small exit pupils that can be cancelled during processing. Less technical factors exist also. It’s easier and less expensive to achieve larger apertures with a binoviewer setup than with binoculars. The ability to change magnifications by switching eyepieces or adding focal multipliers or reducers is another advantage.

Some disadvantages of binoviewing are obvious. The added cost of doubling an eyepiece collection is difficult to ignore. Modern systems from Denkmeier and Siebert minimize this effect by permitting multiple magnifications. This makes each EP pair more useful and reduces the number of pairs required. Splitting the light into two paths and running it through more optical elements results in less light reaching each eye from a given object than in Cyclops mode. Most users seem to find this is offset by the increased efficiency with which the images are processed by the brain. Some find it to be a disadvantage for deep sky use. Choosing a binoviewer unit with efficient prism design and/or coatings can reduce the losses.

Less obvious disadvantages exist. The light path through a binoviewer is generally between four and five inches. Some telescopes (nearly all refractors and Newtonians) don’t provide sufficient focus range to accommodate this added length. Correctors are available to compensate for this, but they add cost and complexity to the system as well as increasing light loss to some extent. The prisms used in common binoviewer designs restrict the light path. Some units have clear apertures of 26mm or greater (Denkmeier, Tele Vue), while some restrict the lightpath to 22mm or less (Celestron, Burgess, Siebert, StellarVue). It’s desirable to avoid using eyepieces with field stops larger than the clear aperture of the binoviewer being used, which means that the smaller units are generally less desirable for use at lower magnifications. The Siebert Echelon series offers clear apertures of up to 35mm, but these haven’t been generally available and I haven’t seen one. They also offer 2” units which I also haven’t seen and can’t comment on.


So what’s it gonna cost?

Binoviewing is much less expensive than it has traditionally been. Very good performance can be provided by the recent crop of imported units by Burgess, StellarVue, and Celestron for $200 or so including an eyepiece pair. Midrange units in the $400 class (Denkmeier, Siebert) can do even better. Higher-end units by Denkmeier, Siebert, or Televue are available in the $1000 range.

The Burgess unit is a clear winner in the entry-level binoviewer class. For $200 you can find out whether binoviewing is for you, and if you decide you don’t like it (or like it so much that you want to upgrade) it’d be hard to lose much money disposing of it. If you find the Burgess unit unavailable at a given time (they suffer chronic supply problems) the StellarVue is comparable. In the midrange, the Denkmeier Big Easy package is an attractive unit. For $400 you receive a unit with 26mm of clear aperture and self-centering EP holders, plus correctors to make it work with nearly any telescope at multiple magnifications. For a little more, the Siebert Black Night provides 22mm of clear aperture and a corrector, but adds a pair of eyepieces and a case. The most popular unit in the $1000 class is the Denkmeier II. They have recently switched their line around quite a bit and offer a great many options including their PowerXSwitch so it’d be prudent to check with your dealer for current package pricing. The 2” Siebert units are in the same range and show promise but I’m reluctant to recommend something I haven’t seen.