Whenever I bring my college classes at Suffolk County Community College into the school’s small planetarium to learn the constellations, invariably someone asks to see their astrological sign.  So, when I show them constellations like Scorpius, Taurus, Gemini, and Leo, they come away impressed.  But as we wind our way along the ecliptic and come to Aquarius, those born under that sign feel cheated because there are no bright stars pointing the way to "their" sign.  (Of course, imagine the reaction when I tell those born between December 1 and December 18 that their sign is actually Ophiuchus!  But I digress.) 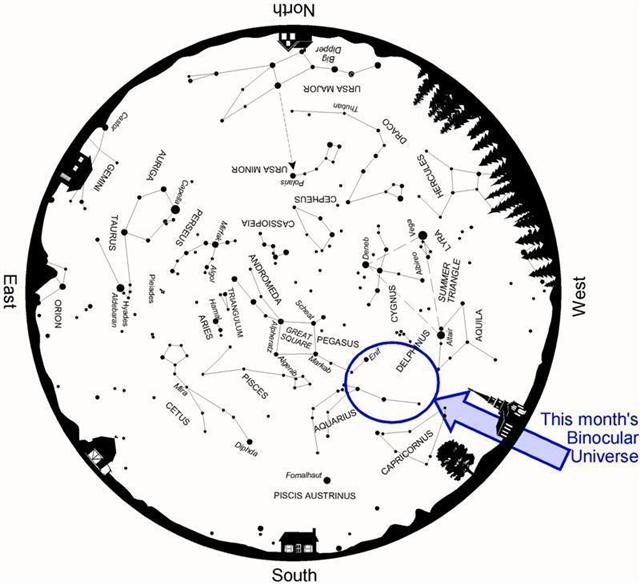 Above: Autumn star map adapted from the book Star Watch by Phil Harrington. 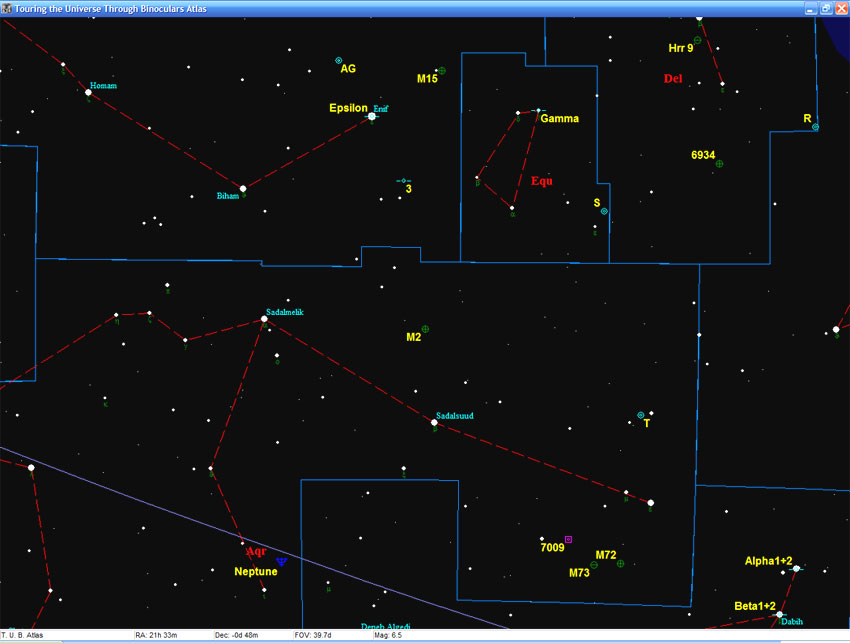 I can understand why.  Since no bright stars highlight Aquarius, light pollution often hides the constellation's faint outline.  Aquarius is identified in Greek mythology as Ganymede, Zeus' water bearer.  According to legend, Ganymede's kindness earned him Zeus' favor, who later deified him as Aquarius, god of rain.  He was eventually raised into the sky as one of the 12 zodiacal constellations.  (Actually, 13 counting the aforementioned Ophiuchus.)

We shouldn't let the constellation’s faintness stop us from viewing some of its binocular sights this month.  But to make it a little easier, we need to start our tour of Aquarius at a much more obvious star pattern: the Great Square of Pegasus found to the north.  Draw an imaginary line from the Square's northeastern star, Alpheratz, diagonally across to Markab at the southwest corner, and continue the line an equal distance farther southwest.  There, you should find a Y-shaped asterism of 4th- and 5th-magnitude stars known as Aquarius' Water Jar.  All fit nicely into most binocular fields.  Add in the star Sadalmelik to their west and you can form a convincing arrowhead.

By following the arrowhead's aim to the west about a binocular field, you’ll come to a small smudge of light.  That's the globular cluster M2, in reality a giant megalopolis of perhaps 150,000 stars.  Binoculars typically don't have enough oomph to resolve M2 into anything more than a tiny celestial ball of cotton, although my 16x70s will show it as slightly oblate.  Most globulars appear almost perfectly round.

I always enjoy comparing similar types of objects to one another, and we have a great opportunity to do just that with M2.  If you head about two binocular fields due north, back into Pegasus, you'll zero in on another globular cluster, M15.  M15 lies about 4°, or half a binocular field, northwest of the star Enif at the tip of Pegasus's nose.  Look for a 6th-magnitude star just to the cluster's west.  Together, they create an unusual "double star."  It's easy to tell the globular from the star, however, since M15 will look noticeably fuzzy.  How does it compare to M2?  M15 will probably strike you as slightly smaller, rounder, and maybe ever-so-slightly brighter.

M2 and M15 are both bright enough to be visible through just about any pair of binoculars, but our third globular cluster is much fainter, and as a result, far more challenging.  In fact, at 9th magnitude, M72 is the faintest of the 29 globular clusters listed in Charles Messier’s catalog.  I can barely make it out through my 10x50 binoculars on the best nights as a slightly fuzzy point of light about 3° south of Mu Aquarii.  My 16x70 and 25x100 binoculars make it more obvious, but do little else to improve the visual impression of this distant swarm.

While we’re in the area, try to spot M73, some 1.5 degrees east of M72.  Not that there is much to look at.  M73 is nothing more than a Y-shaped pattern of four stars that range in brightness from 10th to 12th magnitude.  Whether or not these stars are physically related or simply a chance alignment is still under debate among professional astronomers.  Some feel that we are seeing the remnant of an open cluster that has all but dissipated over the course of time, while others remain unconvinced.  Unfortunately, the otherwise accurate data from the Hipparchos astrometric satellite was unable to analyze the stars's distances due to their apparent nearness (as seen from Earth) to one another.  Either way, you’ll need big binoculars to make out the group.

Finally, notice on the chart that we have a planetary guest lurking nearby.  If you've never spotted through your binoculars, now is an excellent time to try.  Look for its 8th-magnitude blue-green pinpoint disk about 1.5° northwest of 4th-magnitude Iota (é) Aquarii this month.  passed opposition on August 22 and is slowly inching its way southwestward through a retrograde loop.

There is plenty more here to keep your binoculars busy this month, as you can see from the list below.  Each is plotted on the chart above.  How many can you find?

Next month, we are meeting royalty, so be sure to dress your best.  Till then, remember that when it comes to stargazing, two eyes are better than one.

Till then , remember that, when it comes to summer stargazing, two eyes are better than one!

Phil Harrington's Binocular Universe is copyright 2011 by Philip S. Harrington.  All rights reserved.  No reproduction, in whole or in part, beyond single copies for use by an individual, is permitted without written permission of the copyright holder.