Good evening, Mr. Barbee.  On William Herschel, discovered a rift of emission nebulosity due south of the star Alnitak (Zeta Orionis) in Orion's Belt.  When it was omitted from the New General Catalogue, but later added to the Index Catalogue as IC 434, nobody thought much about it.  That is, until 102 years later, when the American astronomer Williamina Fleming noticed a small silhouette in front of it on a photograph of the area taken at Harvard College Observatory.  Edward Barnard later cataloged that patch of dark nebulosity as Barnard 33, but most of us know it today as the Horsehead Nebula.  Since then, countless photos of the Horsehead have been taken, and while many observers have tried to see the Horsehead directly, few have succeeded.

Your mission, should you choose to accept it, is to find the Horsehead for yourself with your own binoculars.  This article will self-destruct in 5 seconds.  Good luck. 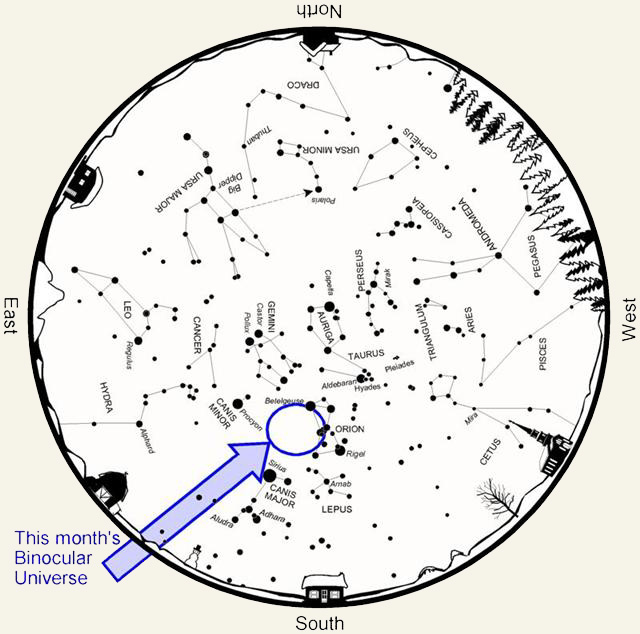 Above: Winter star map adapted from the book Star Watch by Phil Harrington

For those who may have read my first book Touring the Universe through Binoculars (1990: John Wiley and Sons), you will know that in there I say that "the Horsehead Nebula…is too small and faint to be visible in binoculars."  I reasoned that it's tough enough to find it through large backyard telescopes, let alone binoculars.  Well, that was before the 1991 Winter Star Party in the .  After spending some time observing alongside Tom Lorenzin, a talented astronomy author and observer from , I found out that I was wrong.  Tom showed me that the Horsehead is indeed visible in giant binoculars! 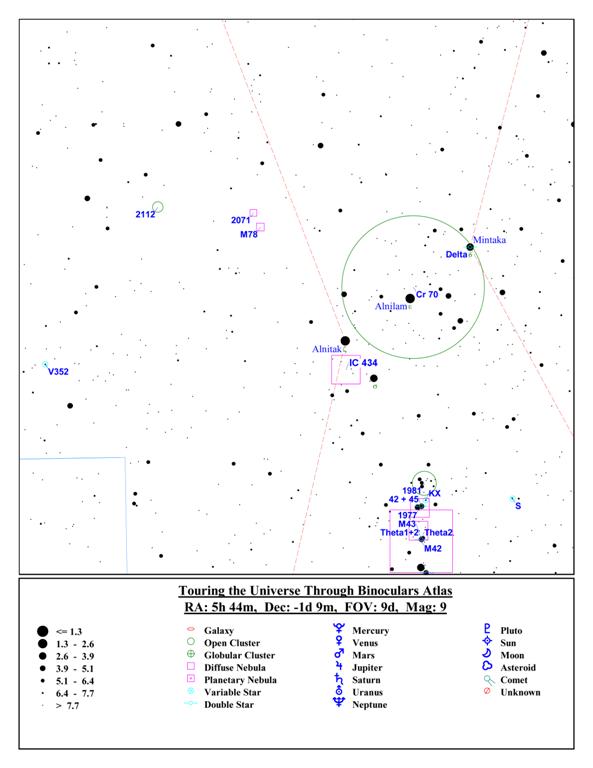 Here's how we did it.  First, we were in an ideal observing site.  The Keys' crystal clear skies and Orion's height above the horizon certainly made a big difference.  Next, he taped a pair of hydrogen-beta line filters to the eyepieces of his 10x70 Fujinon binoculars.  Finally, we made sure that Alnitak was just outside the northern edge of the field, while nearby Sigma Orionis was toward the western edge.  Then, with a detailed chart of the area at our side, we looked for a close-set pair of 8th-and 9th-magnitude stars near the center of the field.  These coincide with the leading edge of IC 434, the emission nebula that lights the Horsehead from behind.  With Tom's help, it took me only a few minutes to pick out both nebulae.  Of course, the Horsehead was very small, looking like the silhouette of a thumb viewed from a few dozen feet away.  Tiny, but it was unmistakably there.  Give it a try and let me know how you make out!

If this challenge was a little too demanding, then let’s try for something a little easier (but still demanding enough to be included in my book).  In chapter 3 (Binocular Challenges), I challenge readers to spot the reflection nebula M78 through more traditionally sized binoculars.  Like the better known Orion Nebula, M42, M78 belongs to a vast expanse of hydrogen gas called the Orion Molecular Cloud currently wafting across the constellation.  While the hydrogen gas in M42 is being ionized into fluorescence by ultraviolet energy emitted by the many stars embedded within, M78 is visible only by reflecting the light from nearby suns.  The starlight reflects off the grains of interstellar dust scattered throughout the cloud, creating a reflection nebula.

To see objects like M78, we need a reasonably dark, transparent sky.  Actually, I find M78 to be an excellent test of a winter sky's quality.  Under a sky with a naked-eye limiting magnitude of 4.5, M78 is barely visible through my 10x50 binoculars as a small, very faint blur.  Improving conditions to a naked-eye limiting magnitude of 5.5, M78 becomes much more obvious when the same binoculars are aimed its way.  The oval cloud appears punctuated by a brighter, slightly offset core.  Although the overall appearance reminds many of a faint comet, the brighter "nucleus" is actually a pair of close-set 10th-magnitude stars that are embedded within the cloud.  Despite the fact that the ultraviolet radiation emissions from these stars is not enough to turn the cloud into an emission nebula, their visible light is sufficient to light up the multitude of dust grains within.

Here is one final target this month that I know every reader has seen a multitude of times.  No challenge here; in fact, it’s visible easily to the naked eye.  You just may not have realized what you were look at.  I’m talking about the Belt of Orion.  All three of the Belt stars, along with another hundred or so fainter suns, belong to an open star cluster known as Collinder 70 (abbreviated Cr 70 on the map above).  The Belt Cluster was not recognized as such until research conducted by the Swedish astronomer Per Collinder (1890-1974) showed that the stars were all about the same distance away and moving in the same direction through our galaxy.  Many of the 471 open clusters that Collinder included in his 1931 catalog are too large and sparse to appreciate through most telescopes, but are perfect for binoculars.

Most of the stars in the Orion Belt Cluster shine brighter than 9th magnitude, bringing them within range of 50-mm binoculars from suburban skies.  When you look their way, consider that those stars are probably less than 10 million years old.  That's very young compared to our 4.5-billion year old Sun, but much older than the stars in the Orion Nebula, which date back no more than 300,000 years.

Overall, Collinder 70 looks football-shaped, with the three Belt stars marking the ball's length.  There is also a distinctive S-shaped chain of 11 faint stars snaking from Mintaka, the Belt's western star, to Alnilam at its center.  I like to think of them as stitching on the football!

So, there we have a couple of binocular tests and one easy object that will hopefully push you out the door on these cold midwinter nights.  Looking for other objects to view?  Here are a few visible within this month’s Binocular Universe window.

If you spot any of these tough objects, I'd love to hear about it. Send an e-mail to me at phil@philharrington.net with particulars, or with any comments and suggestions you might have for this e-column.

And be sure to print the PDF version of this column to bring outside with you.  Click on the 'Download this Document' link at the top of this page to download the PDF file, which you may print or save for future use.

Next month, we return to enjoy more of the magnificent winter sky.  Until then, remember that two eyes are better than one.

Phil Harrington's Binocular Universe is copyright 2011 by Philip S. Harrington.  All rights reserved.  No reproduction, in whole or in part, beyond single copies for use by an individual, is permitted without written permission of the copyright holder.