Serpens the Serpent has the unique distinction of being the sky’s only constellation that is sliced in half by a second star group, the constellation Ophiuchus, the Serpent Bearer. To the west of Ophiuchus is Serpens Caput, the Serpent's head. This sparse area is highlighted by the fine globular cluster M5, which was discussed in the June 2010 edition of this column, as well as several variable stars that are within binocular range.

East of Ophiuchus is Serpens Cauda, the Serpent’s tail. But even with the plane of the Milky Way passing through, Serpens Cauda still contains no bright stars and surprisingly few deep-sky objects. But what it lacks in quantity, Serpens Cauda more than makes up for in quality. 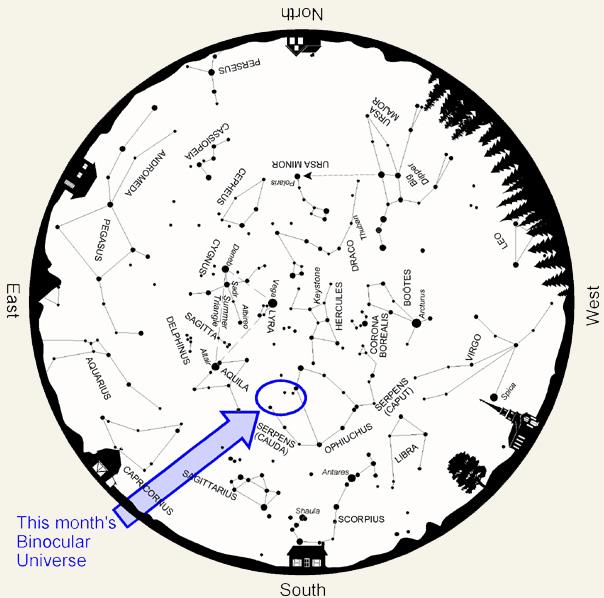 Let’s begin with open cluster IC 4756, a faint, but large mob of stars that’s perfect for binoculars.  Unfortunately, its position is quite far from any handy reference stars, so finding it can be a challenge. Your best bet is to trace a line between Altair, in the Eagle, and second-magnitude Cebalrai [Beta Ophiuchi]. IC 4756 lies just south of the halfway point between the two.

There might not be many bright stars nearby, but the cluster's field overflows with faint stardust. Eighty suns scattered across an apparent diameter nearly twice that of the Full Moon form a faint mist against the backdrop of the summer Milky Way.  The best views are enjoyed through 14x to 16x binoculars, as they have enough aperture to resolve the cluster's many faint stars, but still have wide enough fields to take it all in. Although still fainter stars can be seen through my 20x80s, their narrower field tends to dilute the clustering effect.

Now, scan about 3° west-northwest to find NGC 6633, just across the Ophiuchus border. NGC 6633 spans about a Full Moon's diameter, making it appear about half as large as IC 4756.  While it may look smaller in our sky, NGC 6633 is probably going to prove to be the easier of the two clusters to identify.  In fact, at an integrated magnitude of 5, the cluster may even be visible with the naked eye given good sky conditions.  Binoculars beautifully display most of the stars that belong to this rich swarm, glimmering like blue-white gems against the nebulous glow of the few cluster members left unresolved. 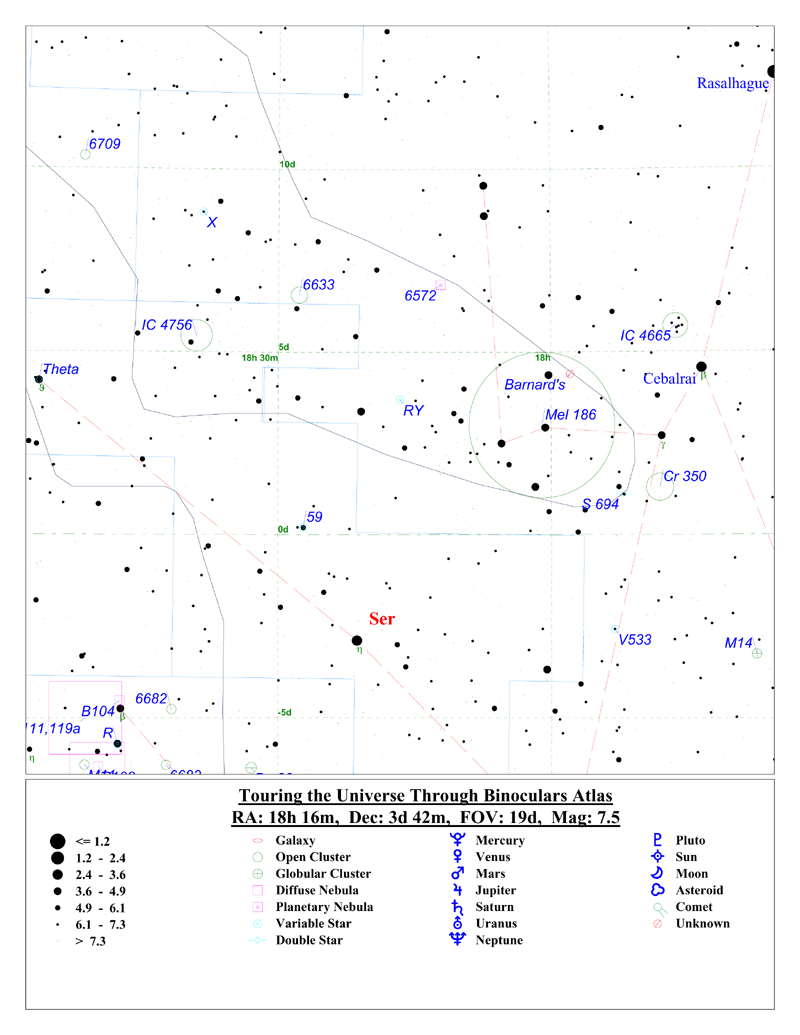 From NGC 6633, take aim at the star Cebalrai and look just to its north for a swarm of faint points. That's the open cluster IC 4665, one my favorite unsung clusters of the summer sky.  IC 4665 resolves into a beautiful collection of about three dozen suns through even the smallest pocket binocular.  I always find it interesting that this grand object was missed by Charles Messier.  If only he had used binoculars!

Shift about half a field east of Cebalrai and you'll come to five stars in a V-shaped pattern that looks like Taurus the Bull. In fact, two centuries ago, the Polish astronomer Martin Poczobut proposed that these same stars be christened Taurus Poniatovii, or Poniatowski's Bull, after Polish King Stanislas Poniatowski II. But just as the king himself faded into history after his reign ended, Poniatowski's Bull quickly lost favor, and is no longer an officially recognized constellation.

Still, Taurus Poniatovii is a fun catch through low-power, wide-field binoculars.  Look carefully, and you may notice how the second brightest star in the V pattern, 70 Ophiuchi, shines with a warm orangish tint. Although 70 is just 16 light years away, some of the other, more distant members of Taurus Poniatovii, as well as other surrounding stars, belong to the scattered open cluster Melotte 186 (also known as Collinder 359). Unfortunately, it is tough tell at a glance exactly where the cluster begins and ends.

There are many other interesting targets in this area, so get out there and enjoy each.  To help you find out what’s what, here is an inventory of objects plotted on the TUBA chart above.

Have a suggestion for a fun binocular target that you'd like to share?  E-mail your suggestions to me at phil@philharrington.net.

Until next month, remember that, when it comes to stargazing, two eyes are better than one!