Binocular Universe: The Swan and the Lizard

October is probably my favorite month for stargazing. The night air is clearer than the humid nights of July, August, and even September. And the temperatures are still warm enough that all we need is a sweatshirt or light jacket to spend many enjoyable hours under the sky. Overhead, the Summer Triangle rides near the zenith as evening twilight ends, while the autumn Milky Way streams eastward from Cygnus toward Cassiopeia. 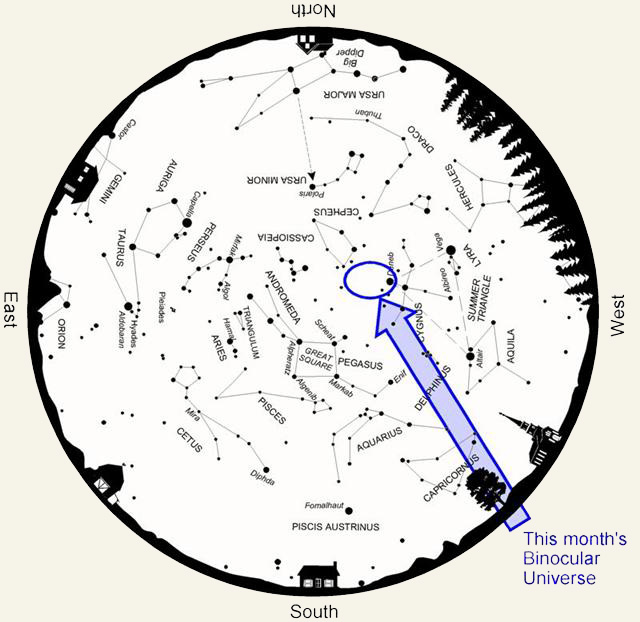 Above: Autumn star map adapted from the book Star Watch by Phil Harrington

Last month, I mentioned that we were going to continue my Stellafane scan of the Milky Way up through northern Cygnus and into its faint neighboring constellation, Lacerta, the Lizard. You probably know Cygnus well, but possibly not Lacerta. Lacerta was one of seven faint constellations created by the 17th-century Polish astronomer Johannes Hevelius. His atlas of the sky, which introduced those constellations, was published posthumously in 1690, three years after his death. 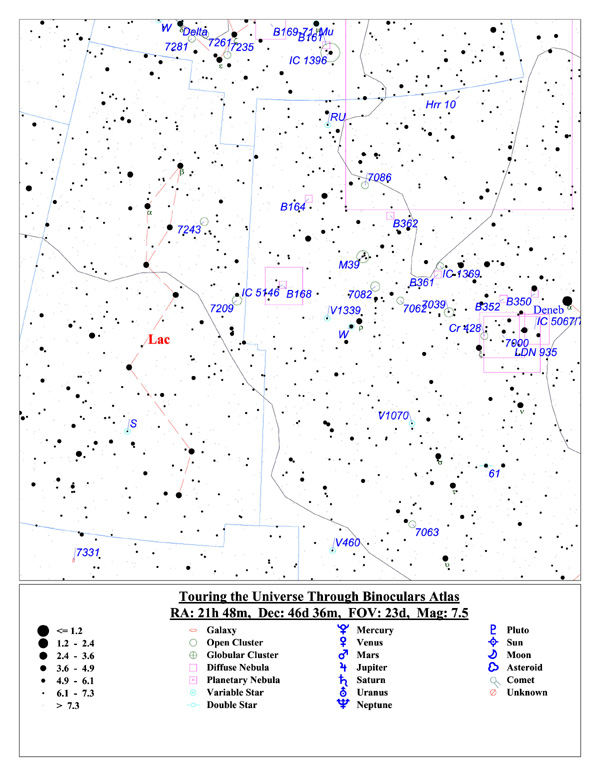 Above: Finder chart for this month's Binocular Universe. Chart adapted from Touring the Universe through Binoculars Atlas (TUBA), www.philharrington.net/tuba.htm

Since the brightest Lacertan stars shine at only 4th magnitude, the constellation's faint, zigzag pattern is tough to make out from any but the darkest observing sites. Binoculars, however, reveal unexpected riches hidden among them, even under moderate light pollution. As you can see from the TUBA chart here, it's a mighty crowded area.

Before we cross into Lacerta, let's pause at M39, one of my favorite late-summer open clusters. M39 lies about 9°, or about 1.5 binocular fields, from Deneb. To find it, scan from Deneb to a small arrowhead of stars just to the northeast. Follow the arrowhead’s aim to a string of six faint stars that continues to the east-northeast. M39 is east of the easternmost star in that line. Look for a tiny, triangular grouping of about two-dozen faint points. Whenever I view it from a dark location, M39 strikes me as looking almost three dimensional, as if it were suspended in front of a blanket of faint stardust.

The sketch below by CN member Rony De Laet also shows a small smudge to the south of M39. That's NGC 7082, a comparatively dim open cluster. As the drawing so clearly portrays, NGC 7082 appears as an oval blur of light with two faint points poking through, one on either end. It's hard to believe that M39 and NGC 7082 each contain about 180 stars, but they do. Their distances explain the difference. M39 is "just" 2,600 light years from Earth, while NGC 7082 is 4,300 light years away.

Working our way slowly toward Lacerta, let's next try for one of the binocular challenges profiled in my new book Cosmic Challenge (available next month "at better bookstores everywhere" from Cambridge University Press). Actually, this isn't just one challenge, but rather, a pair. Here's an excerpt from the book describing them.

The opaque silhouette of Barnard 168 was obvious in my 16x70s from Stellafane in August, but I still couldn't see any hint of IC 5146, the Cocoon Nebula, despite the clear skies. One of my observing projects this month is to try again through my new 25x100 binoculars. From a dark-sky site, both should be evident…hopefully. I'll post an update on my success (or failure) in this column's discussion forum. I'd encourage all readers to do the same and share their experiences with this challenging pair.

Hopping across the border into Lacerta, let's stop at a cluster that's visible in most binoculars. NGC 7209 borders 6th-magnitude HT Lacertae to the south. HT Lacertae is a semi-regular variable that fluctuates between magnitudes 6.1 and 6.4. That variability is far too subtle to be detected by most eyes, but the star's yellowish tint should be evident.

Through my 10x50s, NGC 7209 looks like a soft glow spanning perhaps 20'. The brightest of the 98 stars that call the cluster home shine at 9th magnitude. Although that's below the visibility threshold for 50-mm binoculars, a few faint points are visible in my 16x70s.

You will probably find that NGC 7243 is more satisfying through binoculars. Here, we find some 40 stars gathered into an area about 20' across. Most of the cluster stars shine between 9th and 11th magnitudes, although a few appear a little brighter. Of these, eight are bright enough to be seen through my 10x50s. The remaining stars blend into a circular glow. NGC 7243 is a little less than 3° west of Alpha Lacertae, the constellation's brightest star and one of four that mark the Lizard's diamond-shaped body.

Here is a list of all binocular objects that are plotted on the TUBA chart. That should keep even the most industrious binocularist busy for a while! 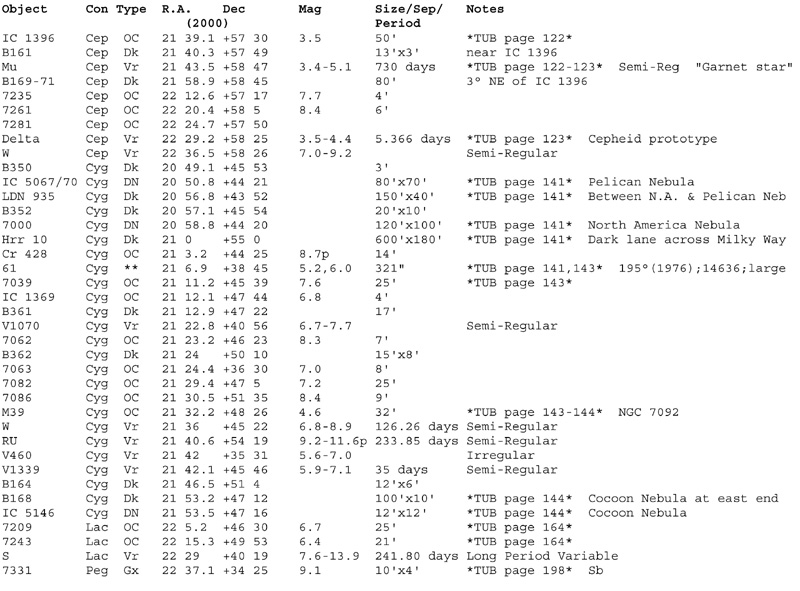 Next month, we'll wrap up my Stellafane 2010 experience with a royal visit to the queen of the autumn sky. Meanwhile, if you have comments or suggestions for future columns, I'd love to hear them. E-mail me at phil@philharrington.net.

Until November, remember that when it comes to stargazing, two eyes are better than one!

Phil Harrington's Binocular Universe is copyright 2010 by Philip S. Harrington. All rights reserved. No reproduction, in whole or in part, beyond single copies for use by an individual, is permitted without written permission of the copyright holder.