Star, Bars & Waves, Resolution of binocuars as a function of exit pupil

I will begin with a short history of how this article came about.

As a keen and active member of the Cloudy Nights Binocular Forum you may realise that I have a special interest in many aspects of binoculars. A few months ago , a long -running "discussion" I was involved with over on the Astromart forums , that included input from Ed Zarenski , was focussed specifically on the various real and apparant effects on resolution , governed by varying objective diameters and exit -pupils.

Private practical experiments I carried out myself only served to reenforce the opinions held by myself ( and Ed to some extent ) , which did not exactly tally with the supposed optical theory that others involved in the discussion persisted in referring to in an attempt to disprove my own assertions.

Although all parties eventually agreed to disagree in a perfectly polite way , I took the opportunity of presenting my predicament to another binocular group I belong to which specialises in the history of the instrument , but includes as it's fellow members some very well qualified and knowledgable optics designers and commentators.

To my great delight , one member , called Timothy Stevens , was so taken by my observations and comments that he was inspired to work on what resulted in the following "paper" , which , for better or worse , he has entitled STARS , BARS and WAVES.

I have corresponded with Tim on several occasions since via private e -mail and am now in possession of five "hard" actual paper copies of the original resulting document , being in fact one of only three people in the world that I am aware of as being in possession of such a document , including the author himself.

I have Tim's express permission to ask you to publish his "paper" exclusively on Cloudy Nights as a " Binocular Article" and trust that , upon reading it yourself and hopefully further presenting it to the " most honourable committee" , you will feel it worthy of publication as a document of which I personally consider could be of great interest to
many readers of articles on your superb site.

I apologise in advance for the great amount of "space" this work takes up , which I must say, for reasons beyond my understanding, seems disproportionate to the actual content . Also for reasons beyond the capability of my all but computer -illiterate brain , the spacing of the document in it's cyber format appears in such a way that I suggest it may benefit from a modicum of re-organisation.

I look forward to hearing from you with regard to the article in due course.

For you further information , the author Timothy S. Stevens can be contacted by private e -mail at : steveptm@earthlink.net

One of the most desired attributes of a binocular is good “sharpness” or apparent resolving power. Even the best binocular optics are “diffraction limited”. Astronomers have long known that the exit pupil of a telescope or binocular must have a diameter of about 2 millimeters at the resolution limit of diffraction-limited optics. Thus, a binocular having an objective diameter of 50 millimeters (and diffraction limited optics) will have a power of about 25X according to this standard of astronomical observation.

Binoculars for terrestrial observation having 50-millimeter objectives usually have a power of only 10X or even 7X (and exit pupils of about 5 or 7 millimeters respectively). The explanation often given for this fact is that larger exit pupils are needed for terrestrial viewing because the pupil of the eye will be larger than 2 millimeters for most terrestrial viewing. The subject of this paper is a more detailed consideration of the apparent sharpness or resolution of a binocular as a function of exit pupil diameter and then a brief consideration of the effect of aberrations. Of course, factors other than exit pupil diameter and aberrations (such as percent transmission of the binocular at various wavelengths of visible light, field curvature, vibration of the binocular and scattered light) also influence the apparent sharpness of a binocular but they are not considered here.

Stars are points of light. When a star is imaged by diffraction-limited optics, the image is the “Airy disk” shown below (Optical Society of America, Handbook of Optics, 1978).

The plot below shows the distribution of the light across the Airy disk (Optical Society of America, Handbook of Optics, 1978). 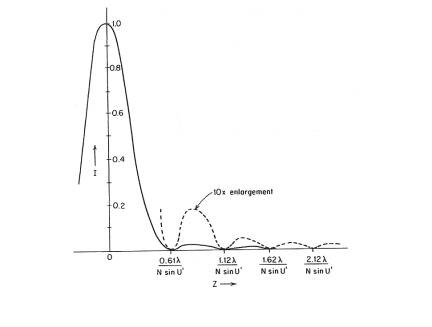 Resolution of close stars depends on the wavelength of the light of the star and the numerical aperture (NA) of the optics as shown below (Optical Society of America, Handbook of Optics, 1978). 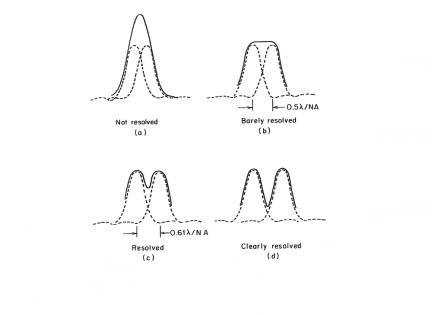 The schematic drawing below depicts the optical system of one barrel of a binocular for viewing of close stars: 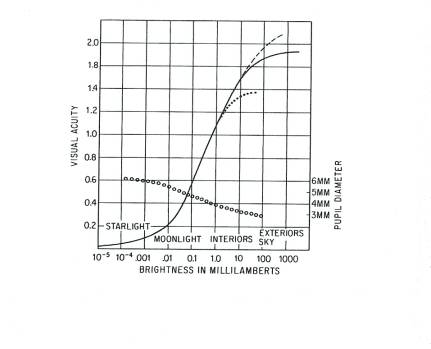 The ability of the eye to resolve a terrestrial image at I through the eyepiece E (assuming the eyepiece E has no aberrations) is primarily a function of the pupil diameter of the eye and the illumination of the target as shown in the graph below (Smith, Modern Optical Engineering, 1966).

In the graph above, visual acuity is plotted in reciprocal minutes of angle. Thus, about the best the eye can detect is about 0.5 minute of angle. However, it us usually assumed that the eye has a visual acuity of 1 minute of angle and such a standard is realistic when the target being viewed is a sin wave target having an apparent frequency of one minute of angle and a modulation transfer function of 0.5 and viewed under optimum conditions. However, such a standard is certainly not achieved at low light levels.

Referring again to the above plot of star resolution, it will be noted that the “barely resolved” condition is achieved at a star separation of 0.5 the wavelength of the light from the star divided by the numerical aperture of the optics. If this separation (in terms of minutes of angle apparent to the eye) is set at 1 minute of angle for the binocular system, then the “barely resolved” condition is just met when the exit pupil of the binocular has a diameter of about 2 millimeters.

Binoculars are most frequently used for terrestrial observation. Terrestrial objects (unlike stars) have finite width fine structure. Therefore, binoculars are often evaluated for their ability to resolve not only stars (which are almost infinitely small points of light separated by no light) but also bar targets (such as equally spaced black and white bars of equal width) and sin wave targets (such as modulation transfer function targets). The square wave bar target tends to be imaged by optics as a sin wave as shown below (Smith, Modern Optical Engineering, 1966). 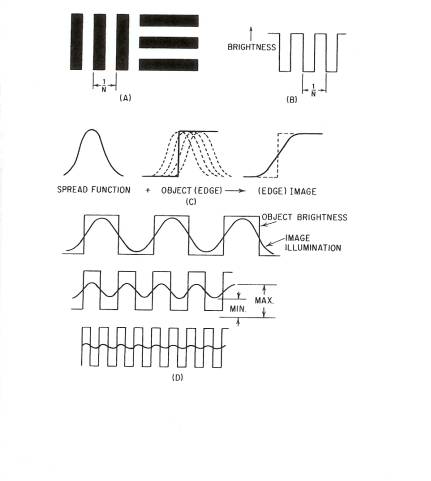 High quality binoculars have optics corrected to the Rayleigh Quarter Wave Limit (Smith, Modern Optical Engineering, 1966) at least in the center of the field of view. Away from the center of the field of view, aberrations increase exponentially. At some point away from the center of view, aberrations increase to the point where apparent sharpness is usually lost. The effect of aberrations can be estimated by the modulation transfer function curves for a perfectly focused system (curve A) and then systems that are defocused an Optical Path Difference of a quarter wavelength (curve 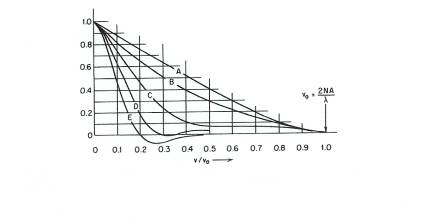 Referring now to both of the above modulation transfer function plots, the degradation in performance from curve A (perfect system) to curve B (aberrations meeting the quarter wave limit) will theoretically require an increase of exit pupil size of from about 4 millimeters to about 5 millimeters to maintain a modulation transfer function of 0.5 for an apparent one minute peak to peak separation of the sin wave image of a square wave target.