Telescope vs. Binoculars: Which Shows Faint Objects the Best? 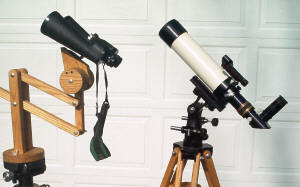 Take a pair of binoculars and a telescope of the same aperture and magnification and compare them on objects in the night sky. This is a project that I had contemplated for a long time. Phil Harrington, in his book Touring the Universe Through Binoculars, said “Our power of resolution and ability to detect faint objects are dramatically improved by using both eyes. In addition, color perception and contrast are both improved.” Overall, Harrington and many other writers in the astronomical field claim a 10-40% improvement in color perception and contrast.

I have been a binocular enthusiast for a long time. The advantages cited above were as real to me as the theory that a quality refractor will outperform a reflector of equal aperture on the planets and double stars. However, I have never seen any actual data showing the results of refractor/binocular comparisons. In the late 80s I purchased a quality pair of high performance binoculars. They are Fujinon 14X70’s with excellent coatings and well corrected images. With a Bino-Mount and a solid tripod these binoculars are always a joy to use. A few years ago I realized I needed a good telephoto lens in the 500mm range to take photos of the February 1998 total solar eclipse in Aruba. The TeleView Ranger, an ED doublet refractor with an objective diameter of 70mm and a focal length of 480mm seemed like an excellent choice, especially since it would do double duty as a travel scope. The Ranger would also make a strong competitor for my experiment. With an enhanced mirror star diagonal and a Meade 32mm Super Plossl eyepiece this scope performs like a champ at 15X. Since there are fewer glass surfaces in the refractor than in the binoculars there should have been a slight advantage to the telescope with regards to light throughput. The Ranger also had a slightly higher magnification. The Ranger with this eyepiece has a true field of view (fov) of 3.5 degrees which is slightly less than the 4 degree fov of the Fujinons. These were all minor differences and this looked like an excellent match up for a “road test” comparison.

It was on a February night I decided to start my comparison.. Earlier the day had been windy, cloudy and warm. Late that afternoon the sky turned crystal clear. It was after 10:00 pm before I got the instruments out. I set up the scope and binoculars and let them cool for 30 minutes for good measure. What a night! The atmosphere was somewhat turbulent but the sky transparency was phenomenal. Six of the seven stars in the Little Dipper were visible with direct vision to my unaided eyes. Light pollution was moderate.

My first target of comparison was M42, the Great Orion Nebula high in the southwest sky. Through the Ranger the grayish-colored nebula was crisp and distinct, nearly half a degree wide. The Trapezium was partially resolved, showing three stars instead of four. The Fujinons showed the same resolution on the Trapezium and the same number of background stars. However, the Nebula was definitely larger, estimated at almost 20%. There was also a strong hint of green to the glowing cloud. Already it seemed there was an advantage to the binoculars. It was time to check out star clusters, galaxies and other deep sky delights. Would the binoculars deliver a knock out punch?

I turned both instruments to M1, the Crab Nebula in Taurus. It was small but distinct in both. There seemed to be a small bit of additional nebulosity in the binoculars but nothing really definite. This is an object that really needed more magnification but it certainly would not have been fair to crank up the power on the scope .
Next up were the open star clusters in Auriga, one of my favorite hunting grounds for these objects. M38 and M36 were framed in the same field of view. I searched for stars visible in one instrument but not in the other. No noticeable difference. Then I realized I could adjust the field of view to include NGC 1893, a much fainter open star cluster with an overall magnitude of 7.5 and a diameter of 12 arc minutes according to Harrington’s Touring the Universe with Binoculars. Burnham’s Celestial Handbook describes this cluster as”…about 20 stars mag 9...12.” Again, there was no definite difference in the images. The view was magnificent in both. I carefully scanned the field and noticed in the binoculars a small, faint splash of light midway between M36 and NGC 1893. The object was not listed in Burnham’s but Uranometria 2000 plots a faint open cluster, Do20, with a 6th magnitude foreground star at it’s western edge. The star was easily visible in the Ranger but the cluster was not visible in the scope even using averted vision. A similar occurrence happened with nearby NGC 1907. This is an open cluster with about 40 stars of 10th magnitude and spans only 5 arc seconds. This time I could detect the cluster in the Ranger with averted vision. However, the image of the cluster held steady with direct vision in the Fujinons.

Two nights later I compared these instruments again.. It was gloriously clear and not quite as cold as my last session. I went back to the same objects as before and verified my former observations. This time, however, I did find a couple of faint individual stars in Auriga that were barely visible in the telescope that could not be seen in the binoculars. Could it have been the very slight increase in magnification that the scope held over the binoculars have done this? Perhaps. M31 in Andromeda was a beautiful sight in both instruments but, again, about 20% more “nebulosity” was visible in the binoculars. A pattern had emerged.

So which is better for searching out dim fuzzies, binoculars or a telescope? My conclusions are that a quality telescope with it’s fewer glass surfaces might resolve a slightly fainter individual star. Binoculars engage both eyes at the same time and will allow more faint fuzziness to be imaged by the brain, perhaps by as much as 20%. How is that for a scientific statement? Of course, the advantage goes to the telescope when you want to increase magnification or add filters. I fully realize that certain models of binoculars have interchangeable eyepieces and filters can also be added. You could also use a binocular viewer with a telescope if you have the money for one of these and the additional eyepieces. I have seen some glorious planetary images in an observing buddy’s 6-inch TMB APO with one of these devices. I doubt that such a system would benefit the observer on nebulas and faint clusters . My goal was to realistically compare a scope and binocular that were very closely matched in size and quality and see which one would perform better on dim celestial objects. All other things being equal (aperture, magnification, quality of optics, etc ) binoculars have a performance edge. This is probably why so many amateur astronomers use giant binoculars to hunt for comets. Here is my recommendation if you want to complete that Messier or NGC list: use binoculars to find the object and see it in perspective with a wide field background. Then crank up the power with a telescope and study it in detail. Use both instruments whenever possible!