As long as I’ve had an interest in astronomy, I’ve had a desire to contribute something useful to this incredible field of science.  For years I’ve read articles on the work of amateurs – from things as basic as counting meteors or sunspots to complex endeavors like determining the shape & rotation rates of asteroids or even timing the transits of exoplanets.

About the time I began visually looking for supernovae (mid-nineties), automated search programs were coming onto the scene.  Since my name didn’t happen to be Robert Evans, I could see the writing on the wall and gave up on that quest after about a year.  Plan B took me away from visual acquisition of data, and into the world of CCD imaging.  These cameras were becoming more popular and affordable, and software was readily available for most any endeavor into the world of digital astro-science.

I traded in my large Dobsonian for a large GOTO Schmidt Cassegrain.  After reading up on matching pixel size to focal length and all the other aspects of imaging, I acquired a non-antiblooming camera, just right for the gathering of scientific data.  Likewise, I bought specific software to operate the equipment and reduce all the gigabytes of data that would start flowing in.  It all seemed simple enough.

Reality began to settle in rather quickly, and I soon discovered just how complicated imaging could be, particularly at long focal lengths.  While the periodic error of my drive appeared to be perfectly fine for viewing through an eyepiece, the pixels in my camera seemed to think otherwise.  PEC training with special software helped immensely, but the slightest breeze put me right back where I started.  Maintaining focus became an issue as the temperature fell through the night, and my aluminum tube refused to stay the same length.  Trying to keep an object (asteroid) centered in the image which was moving at a different speed from the background stars added to the fun as well.  Throw in flat frames, determining the correct sized aperture for accurate photometry, keeping targets on the same pixels for hours at a time and of course the occasional cloud to confuse the guide star and you have turned a potentially relaxing evening into the makings of an ulcer.  I’d walk away from it for a couple of months and then try again – each time ending up just as frustrated as the time before.

So is there a way to satisfy the desire to do real science and not make it so complicated in the process?  I’ll be the first to admit, I’ve always been a bit e-stupid, but surely there are amateurs out there who, even if they are technically savvy, would like to relax just a bit while they advance astronomy.  I am challenged for nearly twelve hours a day managing ship repairs … I don’t need to continue that level of stress when I finally make it home.

I believe I have now finally hit on something that fulfills my desire to contribute, while retaining the enjoyment of actually sitting under the stars, (what drew me to astronomy in the first place).  It’s called single channel photoelectric photometry.  Its roots date back to the early twentieth century, and it has been in use by amateur astronomers since the early 1950’s.  In a nutshell, it’s a device that detects electrons that have been ‘turned loose’ from particular types of metal, after being struck by photons from distant stars.

Photoelectric photometry (PEP), once a mainstay in stellar astronomy, has been largely replaced by CCD cameras in recent years.  But it remains today, the most precise method for determining minute changes in stellar brightness.  In fact, these photometers are capable of milli-magnitude precision and for the long term monitoring of low amplitude variable stars, they really have no equal.  For a relatively small investment, I have an instrument that can attain the same accuracy as one used by a professional astronomer.

Life with PEP began for me not quite a year ago, when I happened upon someone selling their photometer on Astro Mart.  A bit of research into photometers and variable stars got me seriously thinking, and I soon had my CCD camera up for sale as well.  Luck was on my side that week, as my camera sold and I picked up the photometer for just about the same amount of money.

This particular photometer is an SSP-5 and is manufactured by Optec Inc., the only company currently making commercial units.  It had recently been sent back to Optec to have the electronics upgraded to their Generation 2 design.  And although it has a serial connection if one chooses to send data directly to a computer, it is equally suited for use with the P&P method (pen & paper).  In other words, it appears that it was designed with me in mind.  Once the unit is warmed up and the integration and gain times are set, it will continue to display four digit counts for as long as the flip mirror is turned up.  I find myself back out under the stars once again, rather than in a warm room staring at a computer monitor.  My biggest concern at this time is the (remote) possibility that my pen might run out of ink.

Now the key to getting started into a useful program, for me anyway, was joining an organization called the American Association of Variable Star Observers.  The AAVSO was established in 1911 and has been fostering collaboration between amateur and professional astronomers ever since.  (Their hundred year database of amateur derived, variable star measurements is constantly used by professionals.)  Help in the form of a mentor began almost immediately, and I was taking practice deflections (a term from the early days, referring to the deflection of a needle on a meter) the first night.  Several very patient and encouraging emails later, I was sending in actual data.  Something to note here - in order for my observations to be compared with those of others, they must be transformed into a standard system.  A onetime procedure was done that took into account my specific equipment/altitude and how they relate to the different colors of some known variable and comparison stars. 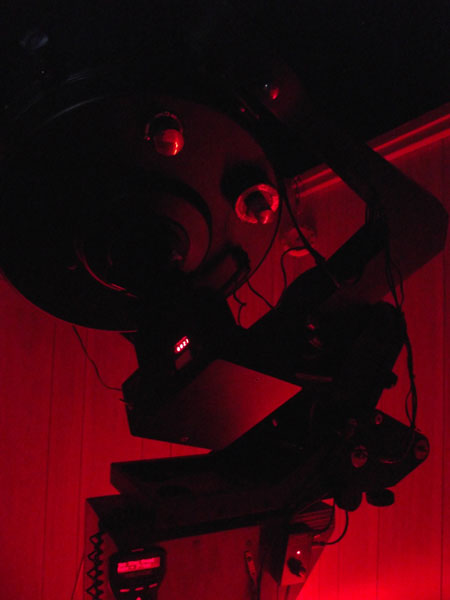 A typical evening for me involves opening up my observatory when I get home from work, turning on the photometer and letting it stabilize for about an hour.  I pick out one or two stars from the AAVSO’s PEP Program Stars - a list of over 200 mostly medium and low amplitude pulsating variables, all brighter than 8th magnitude.  These are relatively easy to locate, particularly if you have a GOTO scope like the LX200 I use.   As far as dealing with moonlight or moderate light pollution, there really isn’t a problem at all.  The sky background is subtracted from each variable or comparison deflection, regardless of whether you’re observing from downtown or a mountain top.

Once it’s dark and the scope has been initialized, I begin a series of 10 second integrations of the variable, a comparison star and a check star (a second comparison star).  Between each of these I also take integrations of the sky background to perform differential photometry .  (All of these are done using a scientific grade Visual filter.)  With the GOTO feature of the LX200, I can work through the series of integrations between variable, comparison and sky in about 35 to 40 minutes.  (The actual sequence is Comparison, Sky,Variable,S,C,S,V,S,C,S,V,S,C,S,Check,S,C,S)  I do a series of four readings at each step to average out seeing and instrumental variations.  The next day I upload these to the AAVSO website, where little elves do all of the transformations.  All I’m doing at this time is basic differential photometry using one filter (Visual).  Much more can be accomplished with PEP, using additional filters – Ultraviolet, Blue, Red and Infrared.   Think of it as kind of a poor man’s spectrograph. 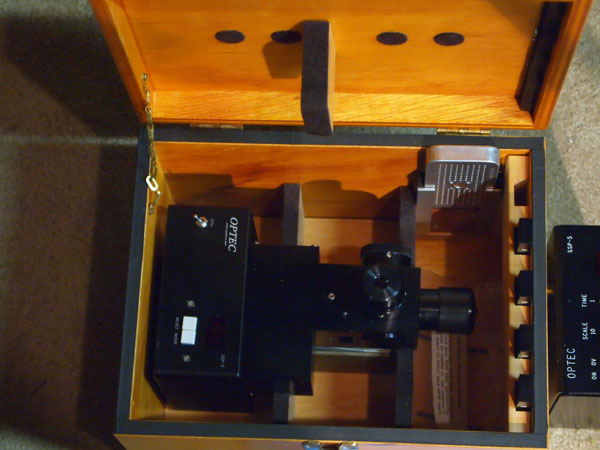 The cost of buying a photoelectric photometer is really no more than that of many popular priced CCD cameras.  OPTEC’s basic model (the SSP-3, which runs off a re-chargeable 9 volt battery), can be purchased new for around $1500 - including two filters.  (The people I’ve dealt with at Optec have been extremely helpful in answering any questions I’ve had, by the way.)  Used ones are not all that common, but do come up for sale on occasion, as is evidenced by mine.  And as mentioned previously, it does not require expensive software to operate.  As far as a telescope goes, most any type of optical design with an aperture of 6” or larger can be used, but a Cassegrain arrangement is probably the most practical.  An 8” SCT is the perfect size and weight for setting up a transportable rig.  Just as in any observing program, the easier it is to set up and take down a scope, the more frequently it will be used.  My 14” is permanently mounted and requires only enough effort to roll back the roof. 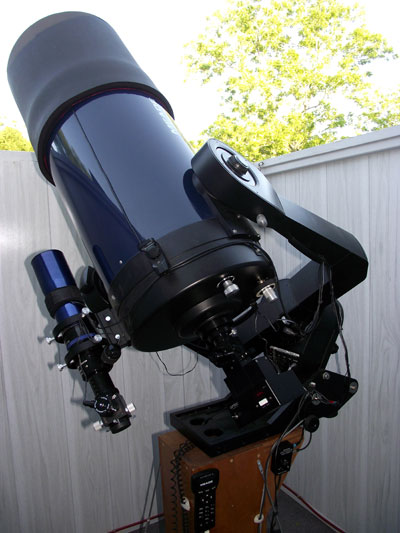 Any polar aligned equatorial or driven alt-az mount that can hold a star in the photometer’s illuminated aperture for about a minute, is certainly adequate.  My LX200, with a focal length of 140 inches, stays well within the aperture ring, which equates to just under one arc minute.  The only drawback to using a fork mount is dealing with the photometer bottoming out on the drive base, when getting above 60 or so degrees in declination. (The photometer is about 9” long.) 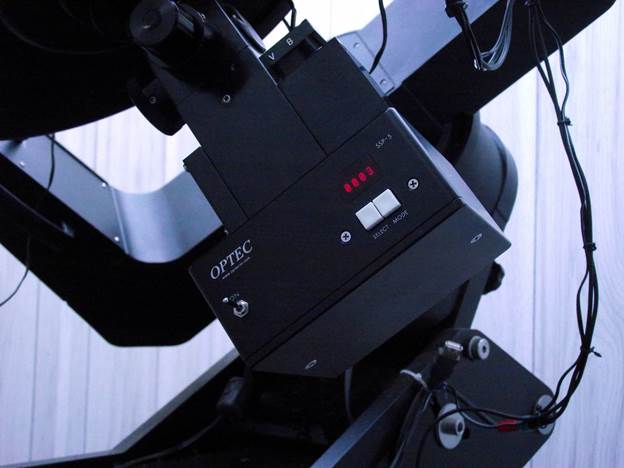 PEP might be something to consider if you want to contribute to science, but without dealing in all the complications of CCD imaging, and if you aren’t looking for immediate gratification.  Perhaps just the satisfaction of contributing to the understanding of how the Universe came to be, and possibly how it will all end, is enough to satisfy this need.  It seems to be so with me anyway.