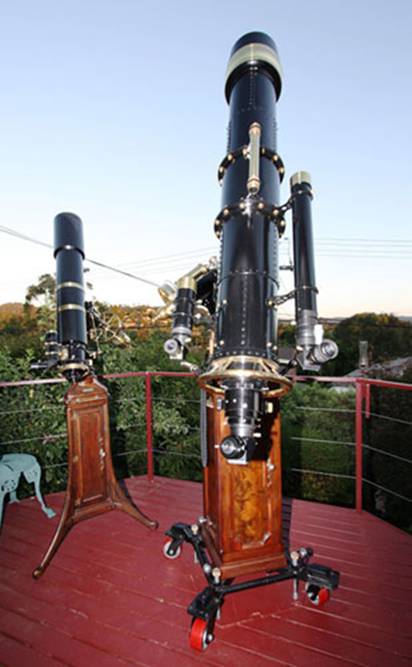 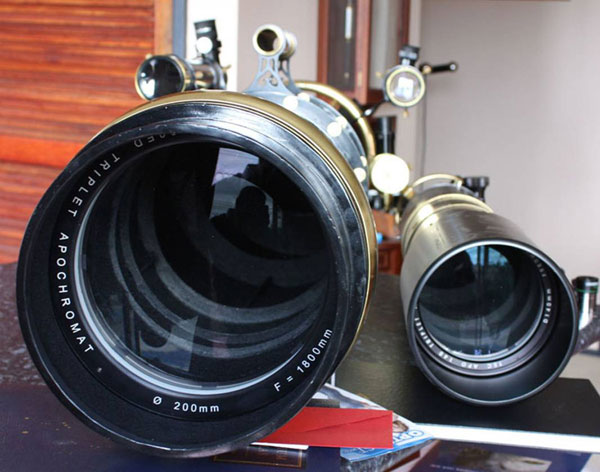 Regardless of how happy you are with your telescope every now and again we all find ourselves wondering what the same scope would be like with a bit more aperture. I bet even the guys with 30” Newtonians occasionally wonder what they could do with 48!

About seven years ago I bought a TEC 140 and it’s been a great scope giving me some wonderful views of the southern skies (yes that’s a 140, Yuri made an all black one specially for me). But no matter how good the glass is, 5.5 inches isn’t a big aperture by today’s standards and I found myself drawing up plans for a bigger version. I was fortunate enough to get the last 8” ED triplet produced by TEC (No24) and built this into a scope of my own design.

There have been several reviews of the TEC 140 already so I’m not intending to talk about star tests etc because others have already covered this. My experience testing the 200ED is that it’s a very similar animal to the 140 except for its additional aperture and f9 ratio. Sufficient to say, both are excellent optical instruments, delivering what you’d expect from a high quality apochromatic refractor.

The focus of this review is more on what one might expect to achieve by such an increase in aperture at a very average suburban location and what one might expect to pay for that in terms of ease of set up etc. Although these are two apo refractors, a lot of what I’m about to describe would probably apply equally well to any high quality telescope of comparable aperture.

Light pollution at my location is probably average for most suburban observers. Magnitude 4 stars are visible as is the Milky Way and Magellanic Clouds. But the sky is more a dark blue grey than black. As a consequence, this isn’t a deep sky site and I’m not primarily a deep sky observer. If I were I don’t think even 8” aperture would really be enough to keep me happy.

What I found when comparing the 140 to the 200 was that on wide field views of the Milky Way and nebulosity such as the spectacular Eta Carinae nebula, there really isn’t much difference because the light pollution is the limiting factor, not the aperture. With a UHC filter and low magnification one can definitely see more structure in the nebula with the 200 but not a whole lot more. Once you begin to wind the magnification up though you see the benefits with fine swirls and structure more clearly visible in the larger scope.

I’m going to illustrate my impressions with drawings as I think these give the best indication of the actual view an observer would typically see and probably describe it better than I can with words. 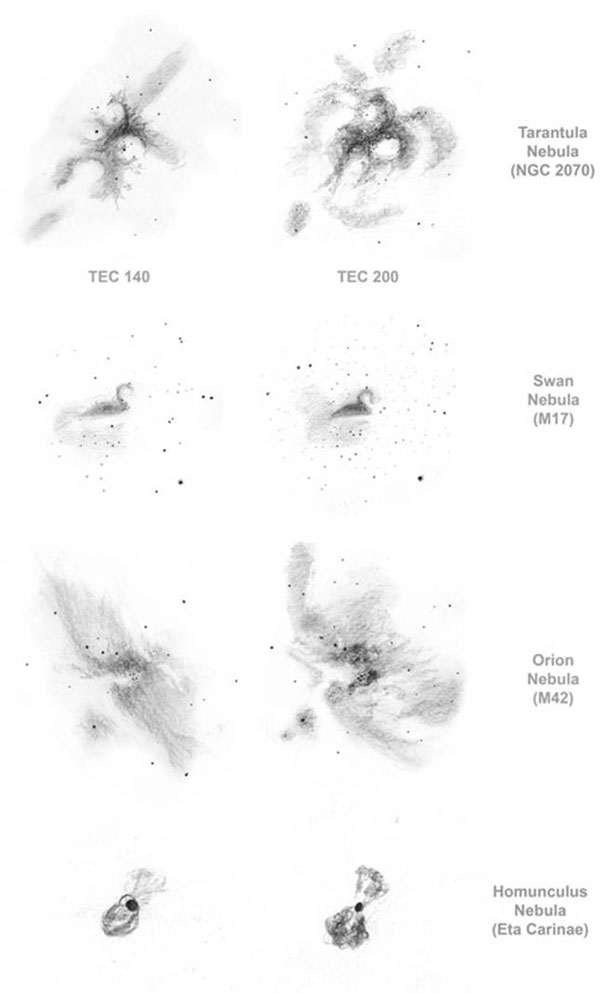 (Fig1) My general impression of various nebulae in both scopes

Much the same applies to galaxies. Although unlike nebulae, that can be enhanced with narrow line filters, galaxies are at the mercy of the prevailing light pollution so they really don’t make great targets for any scope under suburban skies. Though some of the bigger brighter ones do show nice structure.

(Fig2) The Sombrero Galaxy in both scopes

In conclusion, when it comes to deep sky observing, I think the of the potential 2x improvement in light grasp, one only realises perhaps 1.3x due to light pollution. At a dark site of course, it might be a different story.

Double stars are really just a matter of physics. More aperture equals a smaller Airy disc equals better resolution, regardless of the type of telescope. But there are some subtleties too.

Although the separation isn’t that tight, Antares is a difficult double due to the relative brilliance of the primary. However, when higher in the sky, and in reasonable seeing, the TEC 140 will easily split Antares revealing a beautifully contrasting red primary and blue companion. With the 200, the same is true but the double can be split even at 20° altitude and in worse seeing.

Sirius is an even more challenging double again due to the huge difference in the brightness of the components. In fact it’s so difficult that Sirius B wasn’t directly observed until 1862.

With the TEC 140 I believe I may have seen the companion on a couple of occasions when Sirius was close to Zenith – others say they have done so regularly and I believe them. However with the 200, Sirius B is so obvious you can’t miss it. Your first thought on looking through the eyepiece is “Oh what’s that little star there” and of course it’s Sirius B. My impression is that you might see Sirius B in the 140 if you knew it was there but you probably wouldn’t discover it with a 140. Whereas with the 200, it’s totally obvious.

For a final classic test of simple resolution, I chose Delta1 Chamaeleontis an equal 6th magnitude double with about 0.7” separation. Exactly as you’d expect from the physics, the 200 splits the pair cleanly and the 140 shows an elongated star. 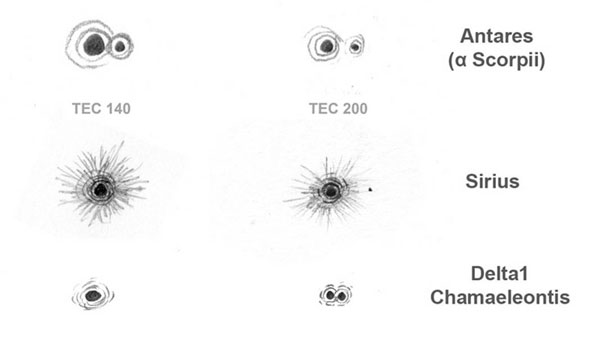 (Fig3) Some doubles in both scopes

On double stars I think the advantage of the 200 is significant. It can split closer and tougher doubles in a wider range of seeing conditions. Of a potential 1.43x improvement I’m tempted to say you get 2x – but clearly you don’t. It’s a big difference though.

Once again this really just comes down to physics. The bigger the aperture the dimmer stars can be seen so the better globulars look. Of course good optics will focus that light into tighter spots than poor optics so there are fudge factors and perhaps a little refractor magic comes into play – but generally speaking, you would expect the bigger telescope to work better on globulars and indeed it does.

Likewise with 47 Tucanae, my personal favorite globular, both scopes will show you the cluster and show it well. But the extra light in the 200 does give the view a little more “wow” factor. The same extends to smaller fainter globulars. Better in the bigger scope but if you look a little harder in the smaller scope, you can see pretty much the same thing. 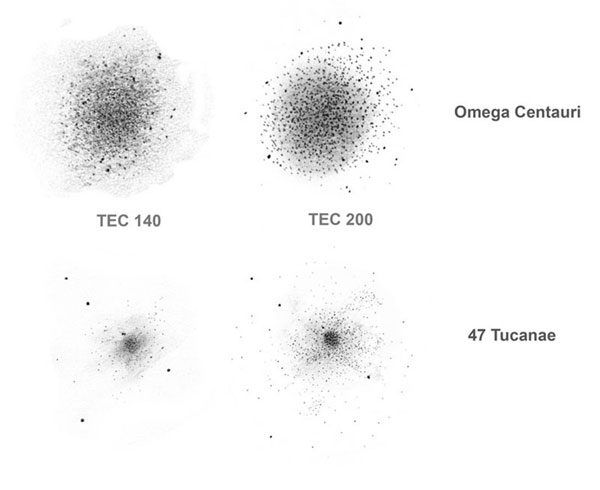 (Fig4) Globulars in both scopes

My preference on globulars would definitely be the 200 but that’s in no way to say the 140 can’t deliver great views of them. It can. But it just comes down to aperture. I bet globulars are even better in your 16” Newtonian, and better still in your mate’s 30” etc, etc…

Of course planets are the bread and butter of the apo world. It’s what in theory an apo will do best, though there’s no doubt that other telescope designs can work superbly in this role too.

I’ve observed the planets of the Solar System with both scopes over the past couple of years and I think the drawings below give a fairly good idea of what they will both do in reasonable seeing. Regrettably from my location I never the get “Mauna Kea” seeing that some enjoy. But on a good winter’s night it can be reasonable.

When it comes to planetary observation seeing really is the primary issue. On a bad night there’s no difference at all between the two scopes as the drawings of Mars below illustrate. On a good night the 200 is definitely better. But the difference between a good night and a bad night is way, way greater than the difference between the two scopes on any given night. Both scopes deliver really high contrast and beautiful vivid colours - the colours that are actually there I should add 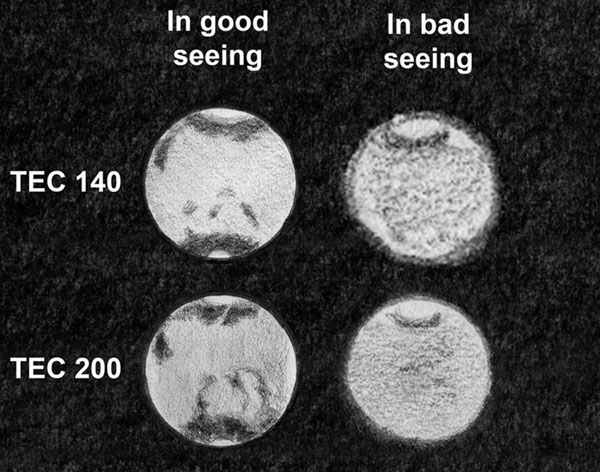 Some planets like Mercury and Venus are always so close to the Sun that you’re never going to get great seeing so the difference between the two scopes is very little. However on Mars Jupiter and Saturn you can definitely see more detail in the 200 than the 140 when the atmosphere will let you. 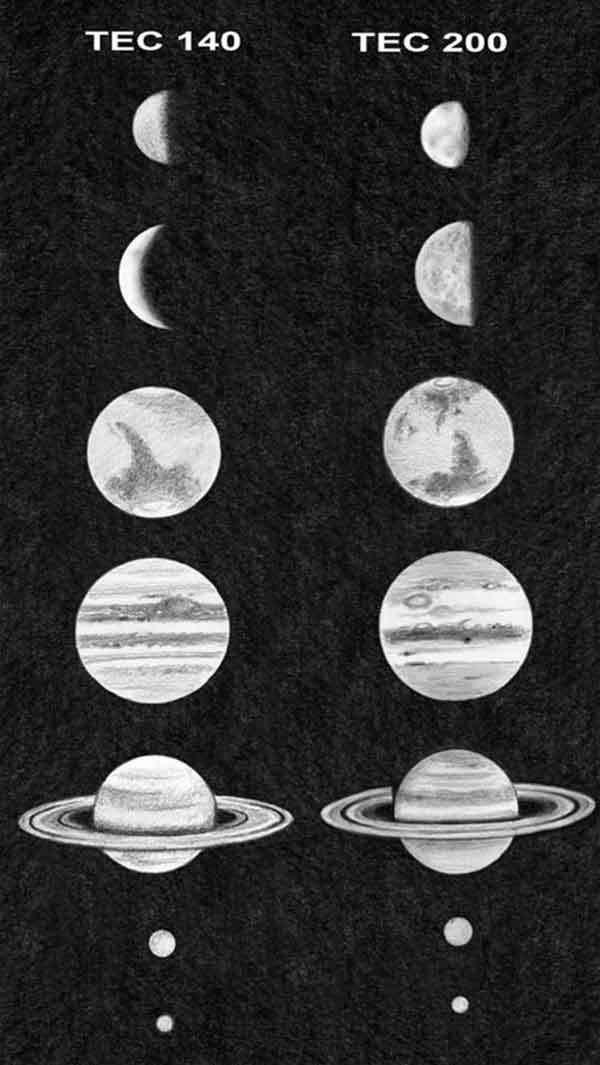 In summary I think I can best describe my impressions of the difference in the optics as follows.

But what price do you pay in terms of convenience and cool down for what is a competitively modest optical improvement?

I had the TEC 140 set up on a mount and pier assembly that could be lifted as a single unit and taken outside to my observing location. I’ve heard scopes of this size described as “Garb and Go” though “Grunt and Go” would be more apt. It can be done but it’s heavy and truthfully you would never grab it for a 2 minute look at the moon before going to bed.

The 200 has to be transported out in two sections, mount and pier first on castors, then the OTA on a special trolley with a built in lift jack that gets it onto the mount without breaking the operator’s back. The whole process takes about two and a half minutes and a couple of profanities – more if I run over my foot with the castors.

The 200 is definitely more trouble to set up than the 140. But it’s like saying that two cows are harder to take to market than one cow. Yes they are, but neither is easy compared to taking a basket of strawberries.

That’s how I feel about these two scopes. Neither is really a “Grab and Go”. So in actual fact the extra effort to set up the 200 doesn’t really impact on my observing at all. The same is true with cool down. The 200 does take a little longer – perhaps 30 mins in winter vs 15 minutes for the 140. But neither is a big issue.

Ultimately the ideal situation would be to have the 200 mounted in a permanent observatory. I’m picturing beautiful carved masonry base, copper dome, wood paneling, paintings of the classical constellations on the ceiling, statues… If Bill gates or the Aga Khan are reading this and the idea sounds good, please feel free to drop me a line

For a Grab and Go, I’d be tempted to aim smaller than an equatorially mounted 140. Perhaps a 4” f7 apo on a light alt az mount is the way I may go one day.

I think the wisdom, if any, that may be gleaned from all this is that there’s no such thing as the best amateur telescope in the world. But for each of us there’s probably a telescope that best suits our personal requirements and the atmosphere at our particular observing site. And for me that’s the 8” refractor. It gives me as much resolution as the atmosphere will generally allow me to use, excellent contrast and about as much deep sky grunt as is useful under a suburban sky.

Finally I should probably add that these sketches don’t represent the absolute maximum one might ever see in these scopes. Merely what might be typical for a moderately experienced observer at a suburban site on a good but not truly exceptional night. I have no doubt that others have seen far more than I with the same glass ;-)