A Homemade Dew Shield For the 10 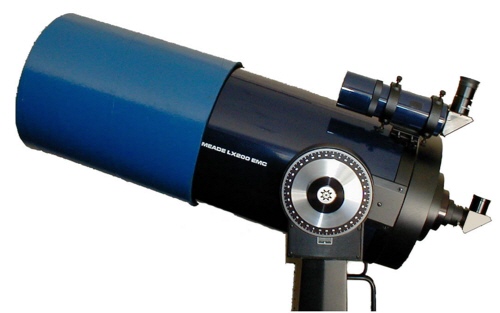 I have been an amateur astronomer for the last 5 years or so. I owned a Celestron 9.25" as my first SCT, and made a "flexible dew shield" for it. I was never satisfied with it since it would sag a bit while on the telescope, and block a little of the image. I also purchased a heating tape for the 9.25" and was never satisfied with it because the Velcro would peel off the rubber at the most awkward moments especially when it was cold out. Having to carry batteries for it was also a problem..

When I sold it and bought this 10" LX200 a little less than a year ago, I was determined to have a better dew shield. After pricing Meade's dew shield, I became determined to build one myself. Since killing 2 birds with one stone is always good, I wanted to build in increased contrast for my scope at the same time.

My dew shield is simple, cheap, easy to build with simple tools, and also increases the contrast of the LX-200 enough so that I use it for all observing sessions, not just those where I expect to encounter dew. It is light enough (about 2 lbs) where it does not seriously affect the balance of the telescope especially since I have 2 finders on the other end. The only drawback is that it doesn't fold up. It is a 15" long 12" wide cylinder that stores on a bookshelf in my garage. Here is a parts list with approximate prices.

The crucial element for making this dew shield came my way when working with a friend on a 10" Dob. While playing with his 12" sonotube, I realized it fit over the end of my 10" LX-200 with about ¼" to spare. I had found the basic tube I needed. Since then, I have realized that this same set up will work for making solar filters or any other attachment. After studying my Orion catalog for a while, I ascertained that the effective length of their dew shields was approximately 12". I had everything I needed to start making my dew shield.

Construction of my dew shield:

A 12 foot section of sonotube can be purchased at construction stores. Home Depot sells various sizes in 4 foot sections. For the 10" LX-200 a 12" diameter is needed. A 4 foot section is enough to make 3 dew shields.

Cut a 15" cylinder of sonotube off the end. Paint the inside flat black to cover any cracks in final coating if desired. Now is a good time to paint the outside of the tube your final color also.

NOTE: If your sonotube has an internal wax coating, you can put a coat of clear polyurethane on it, and then polyurethane flat black for this coating. (The 1st coat mixes with the wax and dries more slowly than expected. I put mine in a garage all afternoon in the summer, and it dried within 3 hours. At 70 degrees, it may take 36 hours.)

In order to make the tube fit snugly on the LX-200, the flat black open foam is cut into three 3" wide 12.6" long sections. This material is 3/16 inch thick and is easy to cut and glue. 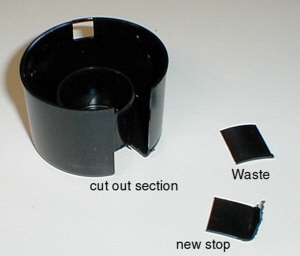 The black aerosol can lid is cut as shown (pic1) to make tube stops. A total of 3 are needed.

Using Duco contact cement or similar glue, glue the first foam strip to the inside of the sonotube on one end. While the glue was still wet, put more Duco cement on the curved sides of a tube stop and insert it into the centers of the foam strip. I weighted this down with some sand in plastic lunch bags and allowed it to dry overnight.

This was repeated in the same manner for the second foam strip. 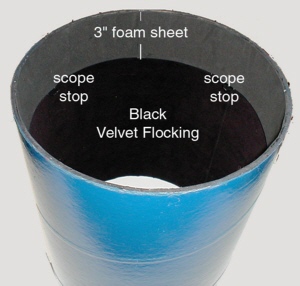 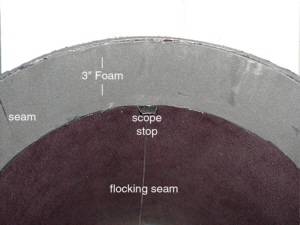 The third foam strip was first measured and a couple of tenths of an inch trimmed off to complete the circle. After trimming, this strip was glued in the same manner as the first two. (All must be completely dry before continuing). There are two pictures of the inside of the tube which show how the tube stops and foam strips are mounted. The telescope tube fits into this end and sits up against the tube stops.

The self adhesive black velvet (flocking material) was cut into 13" wide 12.6" long pieces. The backing was removed and the flocking laid in place and pressed from the center out to remove bubbles. If a bubble could not be removed, it was pinholed and deflated. After a piece had been laid, the excess material at the end of the tube was removed by running an x-acto knife along the outer edge of the tube.

The second piece of flocking was laid, and the third piece was measured to fit between the first two. It was then laid. The completed tube is pictured mounted on the LX-200.

This dew eliminator/contrast increaser has been in use for 8 months now with no observed drawbacks or problems. It slides on with just a little pressure down to the plastic stops. It stays on for the whole observing session with no dew buildup even when my finders have shown dew several times. The black flocking increases the contrast of the telescope's image and cuts down sidelighting from street lamps and neighbor yard lights. It took several evenings to build, mostly because the glue from the foam strips should dry thoroughly (overnight) before putting the next one in.