The Making of an 8" Briefcase Telescope
By Peter Pekurar

It all started Christmas vacation 2002 when my long-time friend Steve Logan and I were feverishly polishing my 25- inch mirror. We were determined to get the thing done! The sweat was just pouring off us after pushing around the big 20-inch polishing tool.

Later that night, exhausted, we talked about the sheer size of the telescope we were creating. While it was sure to pro-vide impressive views, it was hardly going to be the last word in portability. One of us said "Wouldn't it be great to have a super portable scope?" Well, that's all it took. I decided then and there to design such a scope. We would build two of them, one for each of us. 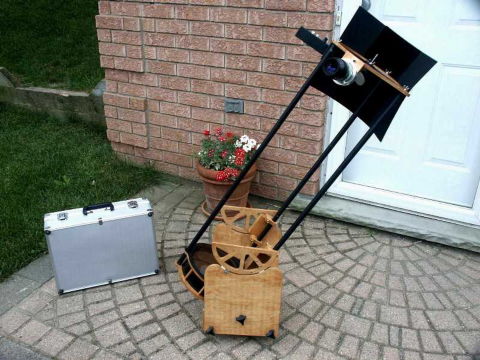 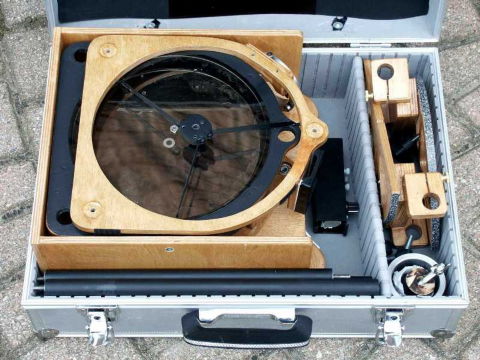 We each had different reasons for wanting a portable telescope. Steve is a researcher who moves quite a bit between universities throughout the USA. Because he lives in tiny apartments, small size is critical. Myself, I wanted a Ôscope I could take on trips, but one I could also leave set up most of the time, ready to use in an instant whenever the observing bug hits me. Especially in the dead of winter, I find that my 12.5-inch scope is sometimes a chore to set up.

My design goals were:

I spent the next few days researching the different approaches other people had taken with portable scopes. I decided that a two-truss design would not provide enough stiffness to prevent loss of collimation after multiple uses.

My research ended when I saw the innovative design of Albert Highe (http://pw2.netcom.com/~ahighe/). This design uses three cantilevered truss tubes, which depend on their structural stiff-ness to support the upper cage.

I started this project by first buying secondary mirror is 1.52 inches. the briefcase which would house and protect the scope. I chose an aluminum tool case measuring 18 x 12 x 6 inches. The case is lightweight, rigid and lined with foam to protect against mechanical shock. The case's dimensions were used to determine the critical design elements required to make it all fit inside, namely:

- Truss tubes that break down into sections while maintaining much of the mechanical integrity of the original uncut tubes.
- Collapsible rocker box sides to allow stacking of components.
- A mirror box that stacks flat and fits into the rocker box.
- A thin upper ring that stacks flat on top of the mirror box.

Each truss assembly is comprised of three aluminum tubes that screw together like pool cues. The tubes are 3/4-inch O.D. with a wall thickness of 0.065-inch, each about 15 inches in length. In order to maintain stiffness, my design uses the full contact of the outermost ridge of the tube. Figure 3 illustrates how I chose to the mating part. Once screwed together the tube assembly is, amazingly, nearly as stiff as the uncut tubes! 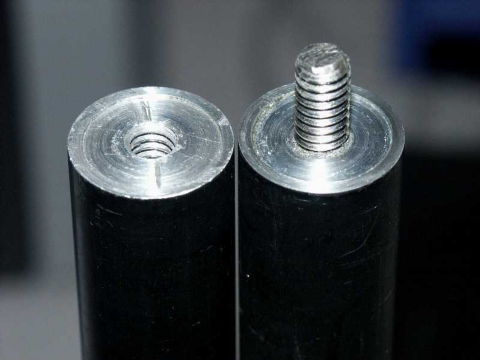 The vertical stacking limit was 5.5 inches, so the sides of the rocker box had to be removable. The rocker sides are held in place with three twist knobs, shown in Figure 4, which thread into threaded inserts that were pressed into the rocker box. The inserts and the twist knobs were trimmed to ensure they do not protrude into the movement path of the mirror box. 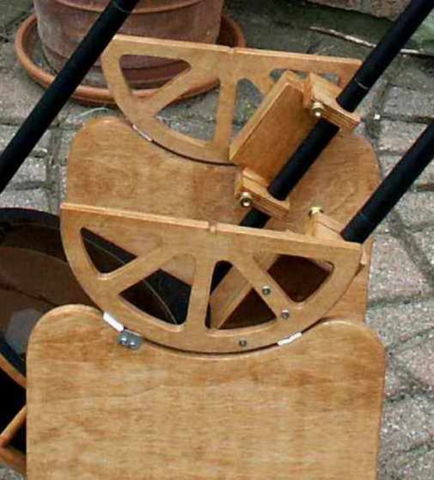 The mirror box is a self-contained assembly that protects the mirror from damage. Unless the mirror needs recoating, it never leaves the safety of this box.

One of the challenges of a briefcase telescope is to ensure that the mirror cannot fall out of the cell. I addressed this by making the cell using a simple wooden plate with collimation bolts.

The mirror is attached to the plate with RTV silicone, thus providing adequate mechanical support. Removal of the mirror for recoating simply involves unfastening the collimation bolts, sliding the mirror out from the top and s****ing off the RTV. I've found that the full thickness mirror is well supported, is easy to collimate and gives excellent views. 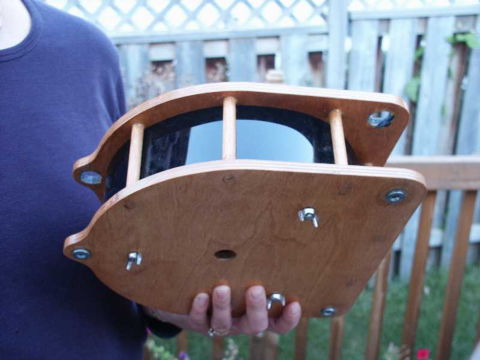 In order to keep the size of the telescope small, the balance point needs to remain as low as possible. A low balance point also aids in mechanical rigidity and fast dampening characteristics by having less unwanted flexure of the mount. The key to a low balance point is to reduce the mass in the upper cage.

To this end the secondary mirror support consists of a simple ring and spider, the whole only 3/8-inch thick. The spider is made of steel banding material, which I bent and welded to provide an amazingly stiff structure. The secondary ring attaches to the three truss tubes with simple wing nuts.

Once tightened to the tubes the entire structure (mirror box, truss tubes and secondary ring) acts like a space frame. Held in this manner, I cannot observe any collimation shift moving the scope throughout the range from horizontal to vertical. It all feels extremely rigid. At the beginning of the project I was quite concerned about maintaining collimation, so I was pleasantly surprised how well this system works!

A secondary light shield is an absolute necessity with this scope. It is comprised of thin foam purchased from a craft shop. The portion directly opposite the secondary has flocked paper sewn to it in order to improve contrast. The shield attaches to the secondary ring with Velcro.

I wouldn't give up my Nagler and Panoptic eyepieces for the world, so the focuser of this scope simply had to accommodate them. It is a full size 2-inch helical Crayford design, which provides very smooth motion, no image shift, and a very low profile with a mass of only eight ounces. The only sacrifice is that the scope moves in altitude every time I change those large eyepieces. In the future, I'll add a brake to the altitude bearing to prevent this unwanted motion. Since several commercial eight-inch Dobsonians also have brakes, this seems to be an inevitable consequence of a lightweight design.

Highe's design calls for altitude bearings which mount to the lower two truss tubes allowing adjustment of the balance point as desired. My version requires removal of these bearings, hence they attach to the trusses with two clamping rings, as shown above in Figure 7. The bearing surfaces consist of Ebony Star glass board riding on virgin Teflon, which provides that amazingly buttery smooth motion that we all love in a telescope.

I've received many compliments about how the telescope looks and per-forms. Some people who initially see it in its assembled state don't believe that it all packs into the small briefcase - until I show them!

The telescope requires ten minutes to set up and another two minutes to collimate. Its movements in altitude and azimuth are very smooth - a little too smooth, in fact. A future enhancement will increase the friction, especially in the altitude axis. Nevertheless, the scope stays precisely where it is pointed. Dampening time is a reasonable two seconds.

The optical performance is superb. I ground and polished the primary mirror myself and Alan Ward of Moonward Vacuum Coatings did the final figuring. Star images are tack sharp and contrast is surprisingly good. Resolving ability on globular clusters is very good, as is viewing and contrast of faint galaxies.

In the end, I have a very nice scope that performs as well as any eight-inch I've ever used and is certainly unique in its ability to travel. I have to admit that the effort required was significant. I in-vested much more time than I usually do planning the design, modifying it as I went along to make parts fit into the case, and searching for just the right hardware. I certainly challenged the limits of what is possible. But then, that's exactly what Amateur Telescope Making should be about!