Although I've been observing for several years, and own (or have owned) several telescopes, I never made a mirror or a telescope until this project. As a girl growing up in the fifties, I'd not even been permitted to take shop, and my woodworking skills were somewhere between rudimentary and nonexistant. I still missed a 6" Dob I'd sold because it was too big, though, and I'd always wanted to make a mirror. When the Delmarva Stargazers offered their mirror making weekend, I signed up for a 6" f/8 mirror. With a mirror, access to a band saw, drill press, and some simple hand tools, I started to plan ...

I just wanted a "grab and go" scope that didn't take up a lot of room when stored and that I could take on an airplane. Experienced ATMers will know that there are going to be "issues" with a 6" f/8 travel scope. I, being a total newbie at this game, had no such premonitions. I looked at every web page about travel scopes, read the books (Build Your Own Telescope and The Dobsonian Telescope), bought some parts and went to work.

For the nested design I had selected, the secondary cage dimensions would determine the dimensions of the mirror box, which would, in turn, determine the size of the rocker box. An octagonal open cage seemed like a good idea. Split block clamps at the corners would secure the truss poles. Sections of half inch wooden dowel would be the struts. Other materials included quarter inch Baltic birch plywood, a three-vane spider from ProtoStar, and a focuser from JMI. I had the plywood cut and drilled before I realized the error of my ways. For a three vane spider, one does a hexagonal cage. I managed to improvise with cute little tabs and unevenly placed struts, but words were said. More words were said when I looked at the JMI focusser and realized it was much too big for my nested design. It was replaced by an HC-1 helical Crayford unit from KineOptics. Despite the gouges on the edges of the 1/4" plywood from the misused dremel router, assembly went quite well.

Cell: Three screws protrude through the back of a simple plywood disk to form the mirror cell. Springs provide spacing between the cell and the bottom of the mirror box. Wing nuts are used for collimation. As recommended in the book, the mirror was attached with aquarium glue.

Altitude Bearings/Mirror Box: The altitude bearings should be two identical half-circles. For now, they're half-elipses. To function properly, they neeed to be mounted symmetrically on each side of the mirror box. To accomplish this, I clamped together the two halves and drilled holes for the screws. I then clamped the two sides of the mirror box together and, using one bearing as a pattern, drilled holes to mark where threaded inserts would go. Each bearing is attached in three places, one at the center and two at the edge. To accomodate under-seat storage, the bearings can be installed flat. This required an extra threaded in each side of the mirror box. Holes in the bottom of the mirror box provide a method for securing the truss poles.

A portable telescope calls for collapsing truss tubes. After pricing Manfrotto monopods, I purchased extension poles. They are sturdy, rigid, and cheap. After cutting off the ends, I attached them to the bottom of the mirror box, using a wooden dowel just slightly smaller than the interior diameter of the truss pole.

Lesson learned: The connection is far from ideal. It's almost impossible to precisely center the hanger bolt in the tube, leading to collimation issues. Even worse, the secondary cage sags (see below). Crude though they are, they work surprisingly well.

Rocker box and Ground Board

A rocker box, being a box, has four sides. As originally built by yours truly, it didn't permit much rock - the sides were way too high. Now I know that the zenith is where the best observing is, but this was rediculous. Lowering the sides to a more reasonable height left several extra holes. A friend pointed out that if I were a machinist, I could simple take my lettering set and write "oil" beside each one and no one would ever know the difference.

Rocker box bearing traces: Somewhat gunshy about cutting circles, I initially made straight cuts. This just didn't look right, so I cut out arcs. Some of my friends, not knowing the history, told me this was "artistic". The clamp together before cutting technique worked here too to produce matched bearing traces.

Ground board and its connection to the rocker box are straight out of Berry and Kriege. Adjustable feet allow the ground board to be leveled.

Putting it all together:

Initial assembly went well. As expected, the scope was top heavy. I had planned to use spring counterweights. I set them up and took the scope outside to line up the Rigel finder. When I attempted to focus on my nemesis - the parking lot light - the rocker box did not stay on the ground. Little Bear had become ... 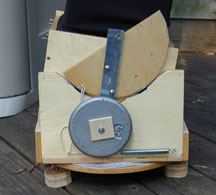 Even I knew, in an intellectual way, that the center of gravity had to be over the feet. Spring counterweights attach the mirror box to the rocker box, but they do nothing for that pesky center of gravity. Real counterweights would be required. In bigger scopes, irregularly shaped pieces of lead are often found nestled somewhere in the mirror box. I had no room, and therefore attached small barbell weights to the altitude bearing with mending plates. A total of 10 pounds of counterweight produced smooth motion and stability. Since this is really quite heavy, I tried a combination of spring counterweight and actual counterweight. Although the motion is not as smooth, this is usable and would be the configuration of choice for air travel. The spring counterweight is also helpful when large eyepieces are used.

Observing near my house, I am plagued by both ambient light and dew, so a shroud was a must. Off I went to JoAnns Fabrics for some stretchy black fabric. The clerk was pleasant and chatty. "What's it for?" she asked. "The telescope I'm making." Not the answer she was expecting, judging from the look I got. All I had to do was make a tube (one straight seam) slightly smaller than the circumference.

So now, I thought it was "done". First collimation is always a pain and folks, the reason none of the ATM web pages tells you how to shim the focusser is that it's trial and error. But finally, everything looked good. With the laser collimator still in the focusser, I tilted the scope. The red dot, which had been nicely centered on the primary, moved an inch. The secondary had sagged. I would have to brace the trusses. My hastily conceived (by this time I was really champing at the bit to get out under the sky and do some observing) solution is shown at right. The wooden block which holds the truss in place rides on two nails and can be adjusted with the screw in the center. No more sag. The collimation is stable, though bashing the secondary cage on the doorframe does make things difficult.

Between my schedule and the weather, there haven't been a lot of opportunities to use LB. Recently, our club had a special star party for participants in our Intro to Astronomy class. I spent the evening watching a shadow transit of Io, and admiring the moon and the Great Spot formerly known as Red. The scope is fun to use. It probably won't quite fit under an airplane seat, but broken down it fits nicely on a shelf in my shop. It sets up in the time it takes to carry it from the car to the observing field. Unless it has been disassembled (or I've whacked the secondary cage on the doorframe while carrying it out the door), very little adjustment of the collimation is required.

Is it done yet? I don't think these projects are ever really finished. There are always improvements to be made. The pesky truss tubes will be attached more firmly as soon the parts come. I really need some sort of manual setting circles (it's hard to learn to star hop when you can't see all the stars in the Dipper because of light pollution), which will require round altitude bearings. You can see the beta version of the setting circles in a couple of the photos. And I just joined the equatorial platform Yahoo group. But for now, I'm out of the shop and under the stars!

Much as I'd love to win one of those eyepieces, it seems unlikely. A vast array of well-executed, innovative designs has been entered. I do want to encourage anyone who has the least bit of interest in this sort of project to go for it. I've had so much fun and learned so much! I've looked at wonderful things through outstanding big telescopes, but no thrill has surpassed that first view of Jupiter through the scope that I built.