This describes my installation of a cooling and boundary-layer scrubbing fan on my Bintel™ 302 mm Dobsonian telescope. This telescope is manufactured by Guan Sheng Optical (GSO) in Taiwan and marketed by Bintel in Melbourne Australia. GSO scopes are marketed under other labels in North America.

I live in the U.S., but moved to Australia for a year with my family. I called Qantas ahead of time, but was unable to secure permission to stuff my 18” Obsession in the overhead compartment. Sticklers about it, they were. No way was I going to be without reasonable aperture while living under the Magellanic Clouds. After I arrived I bought this 12” Dob for the year, knowing I’d probably sell it off when I returned home. I reviewed the scope in another article recently posted on CN.

At first I didn’t plan any modifications but my proclivities for tinkering triumphed over the Just Leave It Alone inner voice. While my wife and daughter were away one long weekend I gathered supplies and created this fan assembly. I also replaced my collimation bolts with Bob’s Knobs to avoid the need for screwdrivers. That’s why the collimation bolts don’t look like GSO stock equipment in the following photos.

I’ve installed fans around the mirror in my 18” Obsession back home and I can identify mild-to moderate improvement in image quality while looking at the planets. This improvement is most evident early on each night. Later – I presume after the mirror is closer to ambient temperature – turning off the fan has less impact on image quality.

I very much appreciated Gene Baraff’s and Tom Hole’s work and publications on this subject on the skyquest-telescopes Yahoo group. From them I poached the idea of using several layers of self-adhesive weather-stripping foam tape to create the ring baffle right above the mirror surface. It is affixed to the inner tube just 1-1.5 cm above the mirror surface. I used several layers and the result was a baffle just 4-5 mm wider than the mirror. As illustrated in the diagram below, it redirects air blown up from below toward the mirror, rather than letting the air follow its otherwise natural path up along the inside of the tube. This installation was very easy and took all of 20 minutes. Thanks again, Gene Baraff and Tom Hole for this elegant solution.

I would point out that I have not confirmed whether this baffle’s location and exact shape are optimal and whether it couldn’t be improved. It isn’t as close as it could be to the mirror edge, and I don’t know the best height above the mirror surface.

I had previously read Greer’s and Adler’s publications in S&T, and had a few exchanges with other veterans on various Yahoo forums on this subject. In addition to the fan mounting, and the ring baffle, I wanted to create a more-or-less “airtight” membrane on the back of the cell so air is forced out the top. Without such a membrane (or gasket, baffle, shroud, etc – I’ve heard all these terms used) much of the air bounces back and is re-circulated by the fan, reducing the total air movement up into the scope. See diagram. This is an old concept, discussed in prior publications, and well illustrated and discussed on the skyquest-telescopes, bigdob, obsession_users, and other Yahoo groups.

While sealing the back of the tube like this is the worst thing you can do if you use passive cooling, it improve airflow if you use active cooling, increasing the total air movement for a given fan size and speed. I’m no physicist or air-management expert but have the principles seemed sound. You can argue the pros and cons of creating airflow within the tube (eddy currents, etc). I would simply quote Greer’s study: it’s not airflow that degrades images but air of varying temperature within the light path.

Here is a diagram of the air-flow concept, and a picture of my ring baffle from the front-tube side. 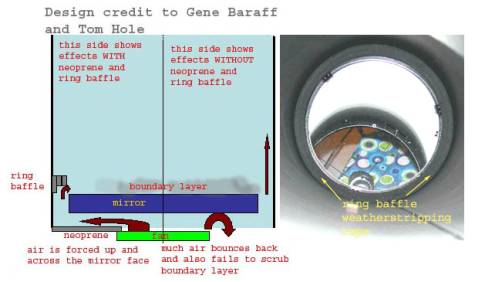 While I had the cell out to install this ring baffle, I removed the mirror (a necessary step) and removed the stock fan. This is an 80mm fan that draws 0.16A and moves quite a bit of air. This is good for a fan designed to be used before but not during observing. It vibrates too much to use during observing, especially when it’s screwed right to the cell. Jupiter jiggles. Saturn shimmies. Etc.

I purchased an 800 rpm 12 cm Scythe computer cooling fan from a specialty store in Melbourne. The cfm rating of this 12 cm Scythe was more than adequate; reference Greer’s Part 2 article in June 2004 S&T wherein he suggests than anything over about 20 cfm is wasted air. I did add a fan grate to protect probing fingers.

I wanted the assembly to be easily removable, and I did not want to drill or cut into the telescope. The most I wanted was removable adhesive. Following Adler’s article, I wanted to mount the fan on a vibration absorbing material. I settled on Neoprene, which served the functions of mounting platform, vibration absorber, and air-tight membrane (air baffle, air shroud, whatever term you want to use).

I bought some s**** Neoprene at a local supplier. I chose gray over the alternative offering of iridescent pink. Yep, it would have been a great topic of conversation at star parties. But I was trying to ‘fit in’ Down Under.

A power coupler came installed in the back of the cell. I kept that and the little 1.5V battery case that came with the scope. I cut the power wires on the old fan and spliced in the coupler (see photo) that came with my new fan. In this way, I can easily unplug the new fan anytime I want to remove the membrane assembly.

I cut the Neoprene to cover the back of the cell. I made the Neoprene a bit smaller than the cell-back deliberately, so it could stretch to fit without anything dangling beyond the tube edge. I designed this Neoprene membrane such that the fan case did not make contact with the cell or other metal components but is instead completely suspended by the Neoprene. This was important to prevent transmission of image-destroying vibration. The large size of this membrane improves the vibration dampening properties, and Velcro further reduces the vibration transmission. I didn’t cut out the center hole straight away (explained below).

The Velcro came with self-adhesive backing but it didn’t stick to the Neoprene very well. Superglue worked. Fortunately the adhesive-backed Velcro seems to stick well to the metal tube flange, so I didn’t need to superglue that end of the Velcro. Despite some damp and freezing nights none of the adhesives ever failed on me. And yes, parts of southern Australia do experience damp and freezing temperatures in winter. It’s rare, and always evokes exclamations from most Aussies who are psychologically ill-equipped to see frost on anything other than a pint of beer. But it happens.

Cutting the central hole for the fan is tricky. The Neoprene is stretched to fit and the hole cut needs to be smaller so when it stretches it doesn’t leave gaps beyond the fan housing; air will leak through these gaps and defeat the purpose of the Neoprene membrane. The center hole is more like 9-10 cm in diameter on un-stretched Neoprene and not perfectly circular.

Using a 9V battery is one option to reduce vibration and the battery size problem. This Scythe fan actually runs fine on a 9V battery, and not to badly, but probably not as long, given the higher current draw than most 9V applications utilize. Another option is to use just 6V (four 1.5V AA batteries) which reduces the vibration even more. This is one more advantage to buying a premium low rpm fan: a lower start-up voltage. This Scythe started up and ran just fine at 6V, also. You’ll find many cheap higher rpm fans don’t even start up at lower-than-rated voltages. You have to give them a spin, like an old WWI fighter plane’s propeller, to get them going. I stuck with the original 12 volt plan for the fan.

With the fan operating at 12V I cannot detect any vibration in the eyepiece while looking at Jupiter at very high magnification. I cannot hear the fan unless I’m at a very quiet location and I put my ear up to the fan grate. That’s the bonus of spending $30 AUD on a computer fan, I guess. My Dob has a near-air tight front tube cover, and this cover has a small aperture mask built into it, with a removable cap, revealing an 8 cm aperture (hole). With only this 8 cm aperture opening and the fan on, the force off the airflow blows out a match. I conclude my air movement is sufficient. I did a simple experiment. I taped the fan without the membrane to the back of the mirror and there is barely detectable airflow out the front of the tube. With the membrane the flow of air out the tube front is strong. The membrane is the only variable, so it really makes a difference.

On high power high contrast views of planets (by the way, did you know that Jupiter was at the zenith in Australia?) I notice improvement when the fan is operating and deterioration within moments of the fan being turned off, at least in the first 1 hour of observing each night. I expect the benefits of boundary-layer scrubbing would be less as the mirror’s delta-T drops over time. But mirror cooling can only be improved with this fan and air-management system unless the ambient temperature is completely stable for most of the night, which is uncommon.

One interesting feature is the view through the eyepiece when you rack out of focus on a bright star and display your bright mirror surface with the shadow of the spider silhouetted. This method is well described in Bryan Greer’s article titled Improving the Thermal Properties of Newtonian Reflectors – Part I in the May 2004 issue of Sky and Telescope. This technique, you will note, is good for identifying mirror thermals and seeing effects. Mirror thermals are slow moving roiling and boiling disturbances you’ll note when doing this, as opposed to more linear very fast moving disturbances of atmospheric seeing. Without a fan the thermals are obvious and tenacious until the mirror reaches the same temperature as the ambient air. With the fan, I watched these thermals assume a moving spiral pattern over the mirror. This is no doubt the effect of my ring baffle directing the air inward from all parts of tube perimeter. This moving spiral pattern slowly resolved over about 5-8 minutes. I conclude this was the boundary layer being “scrubbed” clean by the moving air. When the mirror was really hot compared to ambient, this takes about 20 minutes. And when I’d look carefully even at 45 minutes, I could still see a faint spiral pattern of air motion, suggesting that one cannot really ever completely scrub the boundary layer with this technique.

There are many possible criticisms of this project and an endless number of variations. This is, after all, just another iteration of an established technique. Some might avoid this entire fiasco by simply putting a large box fan up against the back of their scope for 30-60 minutes before observing, to drive down the mirror temperature and reduce boundary layer issues. I do that, too, by the way. But I’m always fighting the clock. I rarely get to a site with hours to spare waiting for a mirror to settle down.

Here is wishing you all Clear Sky and a Cool Mirror.