Most amateurs these days seem to want a goto scope, and those of us who are into ccd imaging all lust after the AP 1200’s and the Paramounts of the world, however not all of us have the budget for these sort of modern computerized scopes. Many of us would love to try our hand at a wide variety of astronomical pursuits, but envy the people with expensive software corrected tracking systems that can be set up to compensate for almost everything.

Some of us also just like doing things ourselves. Building a scope is an important part of the hobby for us, trying to build the elusive perfect scope for our needs.

Yet others worry about what may happen a few years down the track when that scope that we saved so hard for, breaks down and manufacturers no longer stock spares – how many people had a big name computerized scope that stopped working properly due to the y2k bug?

Well the holy grail is here, and has been around for years……The DIY Bartels Goto system.

How would you like a drive that could be used as a goto system on any of the following:

Dob or other altaz scope configuration.

Mel Bartels is a well known amateur telescope maker who, for nearly a decade, has provided a DOS based computer control program and electronics plans/boards for self build drive systems.  He also has a commercial program that controls servo motors, but this is article is refers only to the free stepper version – which is in no way inferior.

He wrote a program called “scope.exe” to run on low end dos based computers  that uses simple electronics to control stepper motors to drive telescopes via a parallel port.. Over the years the program has been added to at the suggestion of users until it currently has no peer as a scope control system. Importantly the source code is available freely……

I have used it to drive a dobsonian (home built), an 8”newt EQ-5 combo, a Vixen Super Polaris/C8 combo, and currently a 10” Newt/EQ6 combo. All of which have performed superbly.

It is impossible in a brief article to fully describe the system, so I’ll simply outline some of its capabilities.

The program MUST run in a pure dos environment, it will NOT work in a Windows dos box due to timing issues. People are successfully running the program on old 486 machines, but my experience has been that things work much better on Pentium class machines – I use a 400mhz Pentium and it works superbly.

The program uses the computer’s parallel port to control a simple box of electronics that in turn drives stepper motors of your choice to control your telescope. The software drives the motors in 2 modes – full step mode for slewing, microstep mode for tracking. How many microsteps per full step you use is determined by the gear ratio your drive uses. My EQ-6 has a 180:1 worm wheel, fed by a 1:5 belt drive from a 200 full step per turn stepper motor with each full step divided into 20 microsteps. Hence each microstep moves the scope:

My scope slews at 1.5 degrees per second between objects, and no movement in the eyepiece is visible at high magnification due to microstepping. 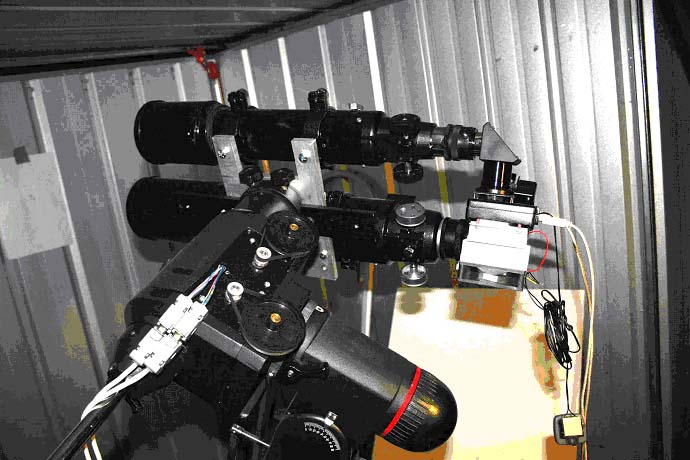 My scope converted to belt drive

The system allows for the following:

The program is easy to drive via a mouse or keyboard inputs. I personally find the keyboard inputs to be incredibly effective and quick to use following is a list: 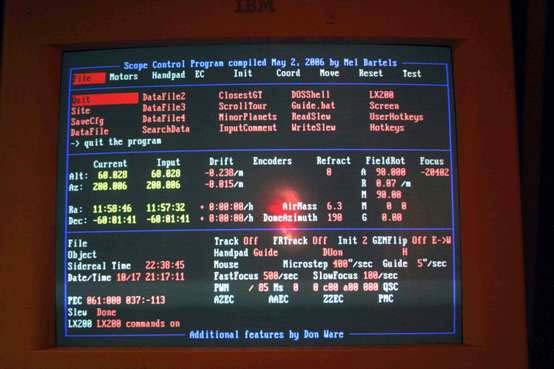 Shot of the screen

'b' begins an already loaded scroll file, and once started, 'l' continues onto the next scroll action, simulating a leftkey press of the handpaddle

'H' selects a hand paddle mode from a selection palette

'i' displays the initializations

'u' altitude axis: graphically displays guiding efforts with respect to pec - gives options to save and update pec

'y' zeroes out the altitude pec array (does not save PEC.DAT)

'z' zeroes out the azimuth pec array (does not save PEC.DAT)

'`' (the left apostrophe key in the upper left of most keyboards) selects the menu item 'Guide.bat'

'*' do a three star polar alignment

How does it perform in practice?

Gotos routinely put an object in the field of view at 500x when properly set up.

I can image unguided for 2 minutes at a 1200mm focal length and get 100% keepers – a result of pec correction, precise polar alignment, and minor drift rate correction – all done in software.

Guided imaging is unlimited – on a night of good seeing corrections are trivial – rms guiding values can be less than ¼ of an arc sec. (12 month old EQ6 raw PE around 15 arc secs. total)

Examples of people using the system

Have a look at the Webring – almost any commercial scope has been converted, and any homebuilt scope can be too. Cost could be anywhere from a couple of hundred dollars up depending upon how much you build or buy, and whether you have an old computer around. Join the Yahoo group and ask questions – it’s full of helpful people. Homebrew is alive and well and gives nothing away to any commercial system…………………No wonder Mel Bartels had an asteroid named after him (17823 Bartels) in recognition of his services to amateur astronomy

There are so many possibilities with this system, that no short article could do it justice, join the Yahoo group and ask questions. If any readers decide to build a system then writing this article was worth the effort…..