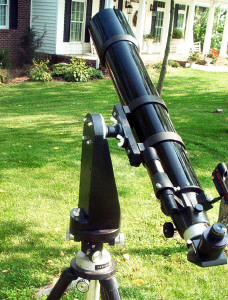 “You may eventually make something much fancier, but for a starter there is no better telescope mount than the turn-on-threads variety made of pipe fittings”. This quote comes from Sam Brown’s book, All About Telescopes. Of course, this was written way back in the 1960’s when no one had heard of a dobsonian mounting. Nevertheless, this book was my guide for the first telescope mount I ever made: an equatorial “pipe mount” for an 8-inch f/6 Newtonian optical tube assemble (OTA) that I had just purchased. This mount was made of 2-inch pipe and appropriate fittings. It was inexpensive, quite sturdy and surprisingly easy to construct. The performance of this mount exceeded my expectations.

Recently I made a solid oak tripod and birch plywood dobsonian mount for my local astro club’s 6-in f/9 Meade refractor. After it was finished I realized that it would be handy to have a lightweight alt-az mount for my Celestron C102f. Yes, I do own a Polaris equatorial mount and oak tripod that this scope is normally used with but that mount is on loan to another club member for him to use with his new 5-inch refractor. Naturally I thought of building a dob mount for my C102f for those “quick looks” when the seeing wasn’t great. But this would necessitate building yet another tripod.

Five or six years ago I purchased a used Samson tripod after seeing it in an ad in a local paper. This tripod was made to use with heavy TV cameras. It has a smooth azimuth motion with an adjustable brake. Altitude motions were made with a double metal “rack” that allowed motions 45 degrees above to 45 degrees below horizontal. I removed the altitude adjustment device and replaced it with a flat disc of solid oak with a couple of carriage bolts countersunk into the top. My heavy duty binocular mount was then attached. This tripod/binocular mount combo has seen years of faithful service.

I could have made a dob head for this tripod but two things caused me to reconsider. First, the Samson tripod already had an excellent azimuth bearing. Second, my refractor would not fit into it’s case if dob bearings were attached to it. It occurred that a simple pipe bearing altitude mount was all I needed for this 10-lb OTA.

A quick trip to the home improvement store yielded a 1-inch galvanized pipe nipple and two matching flanges. I sawed off the edges of one flange and attached it through the two remaining holes to a strip of oak with bolts and nylon wing nuts. This piece was bolted to the scope’s tube rings. This arrangement would make it easy to attach/ detach the OTA to the mount via the wing nuts. I drilled and tapped a hole for a set screw in the side of the flange so this joint would be rigid. I made a pier out of a s**** piece of 1-inch thick solid oak that was approximately six inches wide and twelve inches long. The top of the pier was rounded off to fit the profile of the other pipe flange. The pier was attached to another thick disc of oak with two lag bolts countersunk from underneath. I glued and screwed on a couple of slender triangular reinforcement pieces of plywood. The pier was sanded smooth and given two coats of gloss black enamel paint. The pipe flange was bolted to the top of the pier with four ¼-inch bolts. You can see the shiny acorn nuts in the photo.

Before using the mount I had to be sure the threads of the moving joint were lapped-in. This was done by simply adding a few drops of oil and some grains from some 220 grit sand paper and twisting the parts back and forth. After ten or fifteen minutes the action was smooth. The excess oil was removed and the little bit of oil left was all the lubrication needed for this mount. The last little task was to drill and tap a 1/4X20 hole in the top of the flange on the pier. I added a nylon thumbscrew to adjust tension in altitude.

So, how does it work? Quite well, thank you. The entire scope/mount/tripod combination weighs in at less than 25 lbs. This is about 20 lbs less than when the scope was used with the equatorial mount. Now it is easy to carry the scope around the yard to view objects that were hidden by the many trees in my yard. Vibrations are minimal at low powers, especially with the azimuth bearing tightened down. While I have used the mount at powers up to380X on Mars the results are more pleasing at 280X. At 200X or less the image will settle down in about three seconds or less after giving the end of the tube a sharp tap, half that time when simply refocusing. The total cost for this project was less than $10 for the hardware. The wood was left over from a previous project. Construction time was less than three hours.

Should you make a simple “EL” (elevation) mount for your small scope? If you have a good tripod…why not? Don’t have or know where to find one inch thick hardwood? No problem. Simply glue up two panels of exterior grade plywood. Plywood is stronger and more stable than solid wood anyway. If you have a smaller, lighter instrument you could use ¾-inch pipe fittings. A larger, heavier instrument would probably require beefing up the components and using 1 ½-inch fittings.

This mount is not meant to compare with those new commercial high tech alt-az mounts made of multiple layers of exotic materials, laden with electronic gizmos and capable of carrying a 50-lb payload. It also doesn’t cost thousands of dollars. If you could use a compact and sturdy lightweight mount for that “grab and go” scope then this is a simple and easy solution. Sometimes simpler is better.