The popularity of short focal ratio Newtonians - and in particular "fast" Dobsonians - has brought the importance of accurate collimation into focus (snicker) for owners of such telescopes. The light gathering ability of these telescopes can only be maximally exploited when these instruments are properly collimated.

Despite years of experience I still find myself occasionally playing collimation ping-pong with my telescope: I adjust a bolt, dash to the focuser to assess my move, snort in disgust when I realize that I turned the bolt the wrong way, go back and turn it the other way, and repeat the process usually too many times. Some nights it still seems to take forever, even though it's probably more like 20 minutes. But on those bad nights I sometimes consider converting exclusively to refractors. Or Internet poker.

I stumbled upon this fun and perhaps useful technique for collimation. My wife and I had set up a webcam video-chat with friends in the U.S. a few nights back. My laptop was set up on a counter next to my GSO Dobsonian, and my laser collimator was laying out nearby in preparation for a battery change. I looked at all three objects sitting there and experienced a small-magnitude epiphany. My wife declared it was no epiphany but rather some natural consequence of the beef curry meat pie I'd eaten for lunch. She warned me to clean up after I tinkered and then went to bed.

This technique requires a laptop, a webcam and associated webcam operating software, and a barlowed-laser collimator. And, as stated above, you should know about collimation and barlowed laser collimators in particular.

I scanned the Ice In Space Articles list, did a quick Google search, and a quick search of the Collimate_your_telescope Yahoo group. I could not find this specific technique mentioned. However, it was a quick search, and I'd bet that someone, somewhere, has done this webcam thing and published the technique somewhereÉI just couldn't find it on a quick search. I apologize if this is the case. And I will not be surprised if many people use a variation of remote imaging of their collimator to collimate, using either a webcam or some other camera system. I do know users with large truss Dobsonians who use a finder scope to watch the laser (by its reflection in the secondary), or who use the Blug by Howie Glatter. In truth, these are easier and cheaper ways to image the back of the collimator. There are windowed collimators that you can see from afar, and Glatter has a new windowed unit which - together with the laser - fits into the focuser and accomplishes a similar remote view from the back of the scope.

Really, the method below is just a remote digital visual method of letting you see what you are doing at the focuser while you turn the collimation bolts at the back of the telescope. Obviously you need a laptop (many of us use them scope-side it seems) and a webcam, preferably one of those small laptop-dedicated webcams.

I set the webcam to point at the back of my laser collimator when it was set in the focuser. Your technique will vary based on your scope and webcam. In my case, I just taped some foam to the spring-loaded built-in clamp at the base of my Logitech laptop webcam, and attached it to a spider vane. See Figure 1. I had to insert foam in such a way that the camera was angled toward the focuser. Using the foam this way, I could quickly and easily attach and remove it and get it to point at the back of the collimator with no trouble each time.

I attached the webcam to my laptop, and set the laptop near the front of the telescope (my cheap webcam cable is just long enough) but pointed the screen back to the rear. I adjusted the webcam settings using the software and found the best image quality. You should focus your webcam to get the sharpest image. This does not require an internet connection, by the way. Rather, you are just using the webcam software to project the image of the webcam onto your own computer screen. All webcam software that I've seen permits this.

For nighttime use I have a red acrylic shield over my screen to preserve night-vision. If you are going to use this technique in the field in the dark with other observers, you'll need some form of laptop screen shield to preserve everyone's night vision. If you lack a shield, you should really do this only before dark. A well collimated scope is little consolation for being persona non grata at an observing site.

See Figure 2. In this picture you see the laptop in the background. I used a flash for this photo and consequently the screen image of the back of the collimator is washed out. Real time it's very easy to see the image of the webcam in daylight or at night. 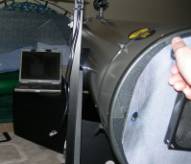 The laser exiting the central hole of the white back-plate of the Barlow attachment (the white disc in the back of the laser collimator in Figure 3 below) caused glare I could not resolve by adjusting the settings of my webcam. As a consequence on the screen I could not make out the precise center of the collimator's back-plate. This is necessary for accurate collimation. I solved this problem by drawing four straight black lines intersecting on a piece of white paper, cut a small hole at the intersection center, and taped this over the hole on the back-plate. This is essentially a hand-made reticle mark. See Figure 3. With this, it was easy to see on the screen when the center-mark shadow was centered over the laser collimator hole (or rather, centered upon the reticle).

I can watch the back of my laser collimator on the laptop screen while I twiddle the collimation bolts, and dial in the primary collimation exactly. Figures 5 illustrate the donut shadow of the primary center-mark moving toward, and arriving at, the center of my reticle as I turn the collimation bolts. Experienced collimators will recognize that the donut in the right image is not quite centered within the reticle; it could stand to move up and left just a tiny smidgeon. I plan to refine this reticle's precision and add some perpendicular hash marks on each reticle line where the donut should touch when perfectly centered.

I still use an autocollimator after primary mirror collimation (and often repeat this cycle under perfect collimation is achieved). But it is primary collimation that takes the most time. The webcam technique is designed to expedite this part of the process.