Flocking a Newtonian
by Carlos Andrade Click to email author

A marvelous pictorial on how to flock a newtonian. Very nicely done photos and easy to follow instructions. Bravo

Flocking a Newtonian ReflectorLet me begin by saying that I'm pretty much a newbie to Astronomy, having started with a 60mm department store scope in march of 2003, and having upgraded to my first "real" scope - an 8" f/5 Skywatcher dob - in August of 2003.

The 8" dob is a great all round scope, giving great views of both DSO's and Planets, and for the price (around 450 euros) you can hardly go wrong with it as a good beginners scope. However, I found out almost immediately that there are a number of acessories that you have to buy to get the most out of your scope, and there are also a number of modifications that you can carry out to truly improve the quality of your equipment and make observing better and much more convenient!

Having read about ways to improve contrast in a newtonian reflector, I'd found that there are two main options: baffling the tube or flocking the tube. Since I'd read some discussions about possible tube currents caused by baffling the reflector, and since it also seemed, by far, the harder process, I decided that I'd try flocking my newtonian.

Recently, I also had the opportunity to look through a couple of scopes the same as mine, but that had been flocked (one with black self-adhesive velvet, the other with protostar flocking paper), and there was a definite advantage in contrast.

As a newbie, and not being very technically inclined, or generally handy with tools, one of the things I'd noticed is that you can find tons of pages on the internet about modifications to your scope, or even scope building, but there aren't that many pages that describe the process in detail, in a way which seems clear to newbies who have never even taken their scope apart to see how things work, so when flocking my scope I decided to take some pictures of the process and write a full description of the process, which I hope might help people who have thought about carrying out this modification, but have felt intimidated by the idea of having to take their scope apart.

Let me finish by saying that this isn't a very dificult modification to carry out, but you should always be as careful as possible when taking your scope apart, so as not to damage it. Please note that my intention is not to write a set of instructions about how to take your scope apart and modify it, but only to describe the procedure I carried out in detail. If you do decide to carry out a modification of this sort to your scope, remember that you do so at your own responsability!

Here's a picture of the tube before the process...she's a beauty isn't she 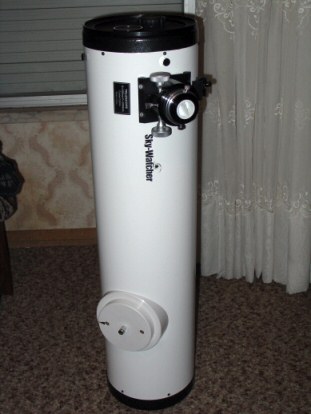 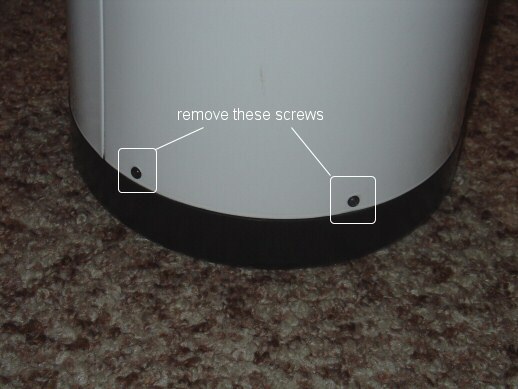 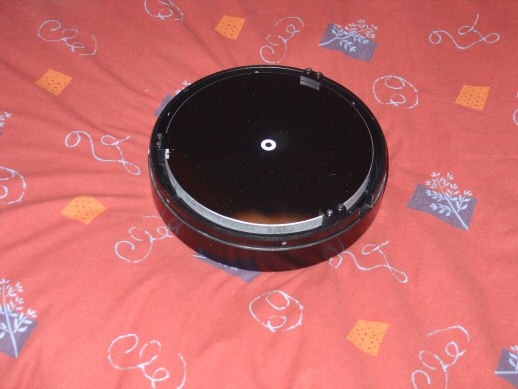 The next step I took was to remove the metal ring at the top of the tube. I'm not sure that this is absolutely necessary, but it makes removing the spider easier.
The procedure is simple, and identical to taking out the mirror cell...you just remove the six screws around the top of the tube: 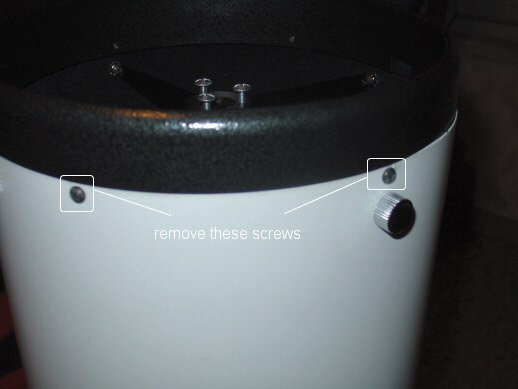 ...and here's a pic of the ring removed 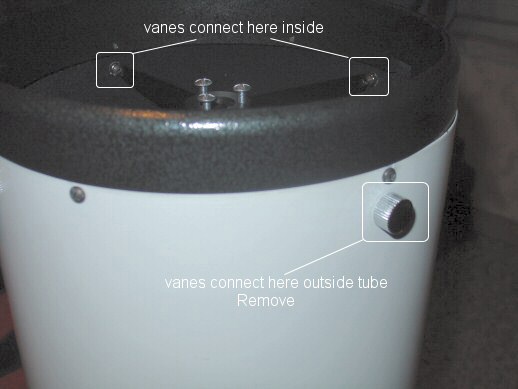 To remove the Spider, I unscrewed the thumbscrews, while always holding the central assembly of the spider (to avoiding dropping it to the bottom of the tube and consequently damaging the secondary mirror): 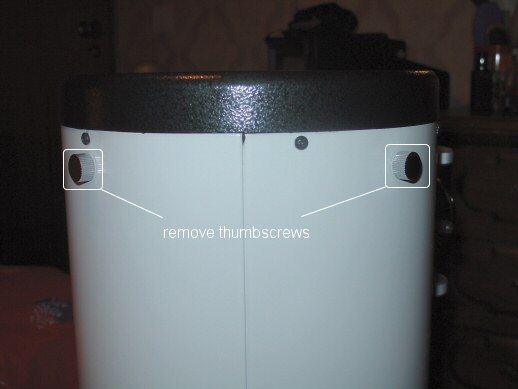 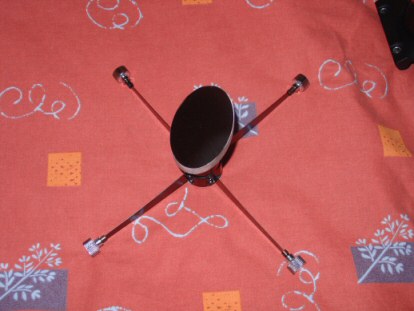 Step 4 - Removing the Finder Base

The next step I took was to remove the base plate for my 9x50 finder scope. This is also a simple case of removing two screws that attatch the base to the tube. 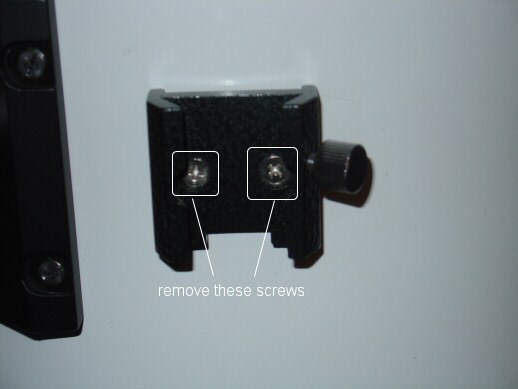 ...and here's a picture of the finder base plate removed I then carried on to remove the side bearings from the tube of the telescope. Again, there are two screws which have to be removed: 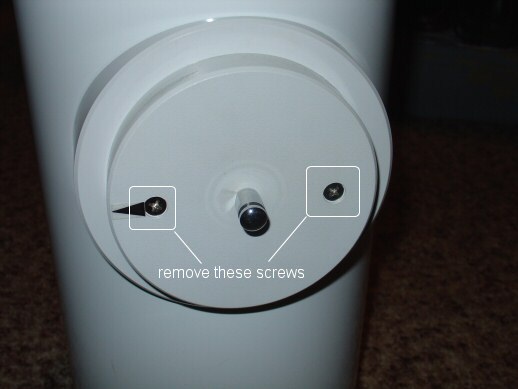 Step 6 - Removing the Focuser The final step was to remove the focuser from the tube. I have a 2" Baader Planetarium Crayford on my scope, which I bought to replace the Synta Rack and Pinion focuser that came with my scope. I find this to be one of the best upgrades you can get for your scope, since focusing becomes much smoother and easier, and consequently observing becomes much more enjoyable!.
my focuser has 4 screws which attatch it to the tube of my scope (I had to drill holes in the tube when I installed the focuser a couple of months ago, since the screw holes are in a different position to those of the synta focuser). Some focusers have screws for collimation in positions close to those that attatch it to the tube, so you should take a look inside the tube and see which screws need to be removed.
Here's a pic of the focuser removed: And there you go...everything's been removed from the tube, and you can now start flocking it Flocking the Tube
So...having removed everything from the tube, it was time to start flocking it. For this, I chose self-adhesive black velvet, which is much easier to buy here in Portugal than Protostar flocking paper, which would have to be ordered and shipped from the USA.

here's a picture of the black velvet flocking paper: ...and here's a picture of the interior of the tube before flocking. You might notice that around the hole for the focuser draw tube there are 8 screw holes instead of the traditional 4...this is because I installed a new focuser, as mentioned before, and had to drill holes in the tube to attatch it. There are various ways you can do this. One of the ways is to measure the outer diameter of the tube and multiply it by 3.1406 (I think!).
Not having adequate measuring tools at hand (I had a 20cm ruler!), and not being entirely sure of my math, I decided to take the easier path...I unrolled a piece of flocking paper around the tube, holding in in place with clothes pegs, and always making sure that it was touching the inside of the tube...here's a pic: notice that I left a bit to overlap. I did this for two reasons. The first was in case part of the flocking paper wasn't touching the tube (altough it seemed to be), and the other was that instead of an exactly measured and cut piece of flocking paper with a visible seam inside the tube, I preferred to overlap one end of the velvet onto the other end (which I believe looks better, and won't let in light from the painted inside of the tube (and the adhesive side sticks onto the velvet side perfectly).

Having "measured" the circumference and consequent width of paper needed, I then went on to cut the pieces needed. Since, the flocking paper I had was 450mm wide by 3000mm long, I decided that I would only need to cut two pieces to flock the tube ( 2 x 450mm -the width of the paper- would be enough to cover the whole length of the tube, and I cut the rest to the length previously determined by the process seen above) notice that I left a space about 5mm after the screw holes of the top metal ring, since this corresponded to the length of the metal top ring itself, and I wanted to be sure that it was still fit back on the tube closely after I'd flocked the tube: I then took a look at the bottom of the tube and "measured" how much needed to be cut, again leaving about 5mm above the screw holes of the mirror cell and base: Having done this, I cut away the excess flocking paper....and now I was ready to being flocking the tube.

I started flocking from the top of the tube. I did this by rolling the tube until the metal seam of the tube was at the bottom, and I peeled off just a bit of the plastic protecting the adhesive, and then glued that part along the metal seam:

I then carried on to peel small sections of the plastic protecting the adhesive off and slowly pushing my hand down the front of the black velvet to make sure it was in proper contact with the tube, and also that I wasn't leaving any "air bubbles" underneath the flocking paper. ...front half done...notice the difference in light reflected by the front half, flocked, and the unflocked half! I then carried out the same procedure on the bottom half of the tube, making sure that I'd left about 5mm of space above the screw holes for the mirror cell and base. Again...notice the difference in light reflected from the flocked and unflocked parts of the tube. Step 4 - Cutting out the Holes

After flocking the interior of the tube, all the holes for the screws were covered by the flocking paper, as can be seen below So...now I had to cut out all of the holes. For this I used an x-acto knife, which is easy on the larger holes like those for the thumbscrews attatching to the spider, and the hole for the focuser draw tube. However, for the smaller holes this was a bit harder, and after making an initial cut I had to enlarge the hole with a smaller knife (and even a corkscrew helped).

I also found it easier to enlarge the initial hole with the screws that were going to be put back in (it also made sure that they'd actually fit when I put everything back together!).

Make sure that you don't leave any loose small pieces of adhesive, after cutting out the holes, because if they fall on the primary or secondary it's going to be a true pain to get them off!

Step 5 - Putting everything back together

Now that the tube is flocked and the holes cut out, it's time to put everything back together (i'd leave the primary and secondary for last, for the same reasons they were the first taken out).

After putting everything back together, collimate your scope and you should be all done