How to Build an Economical "Double-Stack" Finder

In the interest of full financial disclosure, I have no financial stake in any of the companies mentioned in the following article. 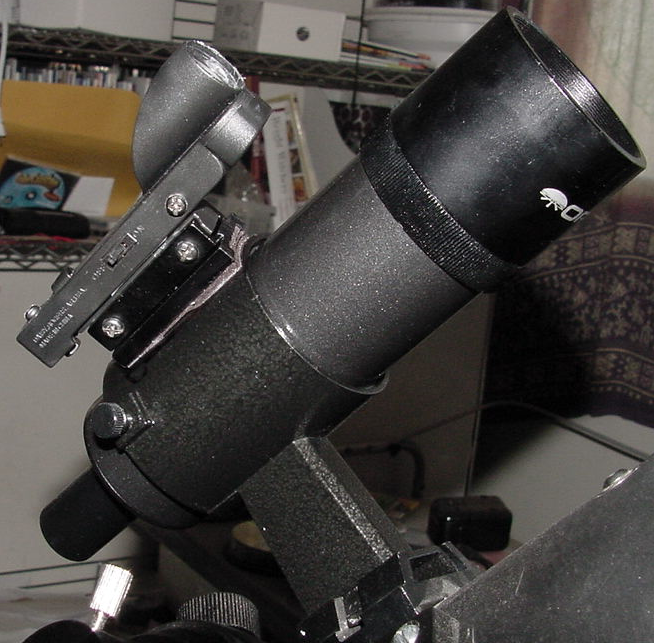 A finished Double-Stack. The pictured configuration
uses a lower-profile dovetail rail
than the one described in the text
(originally supplied with a second generation Orion EZ Finder),
and the red-dot finder is a modified Daisy BB gun sight.

As many astronomers know, no single type of finderscope can be considered the end-all and be-all of sighting equipment. Many observers have multiple sighting devices on a single telescope. One of the most common combinations is the pairing of a unity finder (either a red-dot sight or reticle finder such as a Telrad or a Rigel) and a moderate aperture (usually around 50mm) magnifying finder. Many do-it-yourself amateur astronomers find ways to combine these into a single “double stacked” unit. I have seen elaborate finder set-ups involving 70mm finders with a Telrad mounted piggyback using rubber bands! Fortunately, I recently hit upon a way to streamline the magnifying/non-magnifying pairing to create a 2 in 1 device that is very easy to use and relatively lightweight. The following is also a very stable setup. There is little flexure in the design and will not require frequent re-alignment of the individual components.

These instructions use Synta-type 9x50 finders on the quick-release XY alignment bracket as a jumping off point, purely by virtue of the fact that these are currently the most ubiquitous moderate-aperture finders on the market.

The other parts required will be: 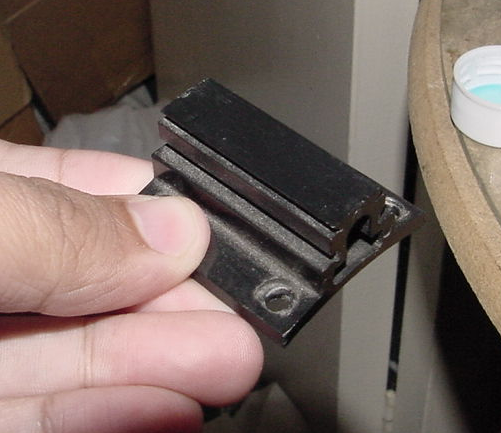 The dovetail rail pictured above is taken from
a “Galileo” 4” Jones-Bird reflector. It has a
similar base curvature and profile to the Stellarvue unit.
The rail is a narrow one used for standard red-dot finders.
Not intended for use with multi-reticle finders.

The curvature of the base of these Stellarvue dovetail rails is not well suited (initially) for the curvature of the outside of the 9x50 finder’s mounting ring. The way the foam mounting tape is trimmed and attached will compensate for this. Cut four strips of foam mounting tape. Each strip needs to be a quarter of an inch wide by the length of the unity finder’s base. Remove the backing and place two strips on the underside of the base, one along each side edge (fig.2). Place the remaining two strips exactly atop the first two (fig.3). Cut a fifth piece of foam tape the same width as the unity finder base, but only half the length. Place this over the forward half of the previous foam strips (fig.4). 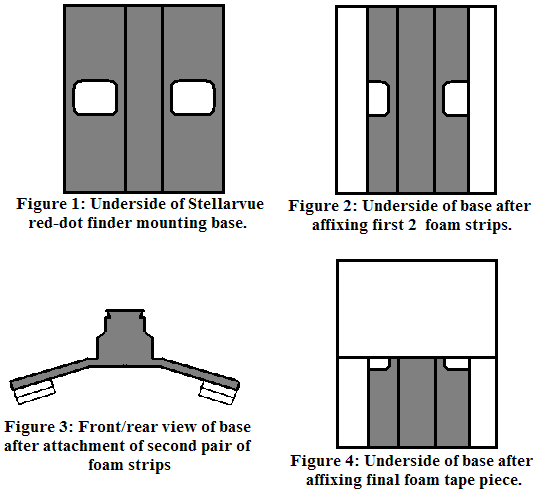 This arrangement will make star-hopping a much easier task. I’ve even been able to switch back and forth between finders just by closing one eye and opening the other!

* Daisy sights can be purchased for approximately 9 dollars at most sporting goods or firearms retailers, and can be easily modified for variable brightness with an inexpensive micro-potentiometer from Radio Shack. Total cost in parts for modifying a Daisy sight into a red-dot finder virtually indistinguishable from an Orion EZ Finder is around 15 dollars. Full instructions for modifying the Daisy Electronic Point Sight can be found in the second edition of Phil Harrington’s “Star Ware.” This can be a very economical option for cutting down on the cost of building a “DoubleStack” finder.