Upgrading a C11 to a Carbon Fiber Tube

I've always liked the look and feel of Carbon Fiber OTAs. A recent ad on Astromart for aftermarket Carbon Fiber tubes looked interesting and I decided to give the upgrade a try. While nearly $300 shipped is pretty steep, it does give you an option of having a Carbon Fiber OTA after the fact. It would be better to go with the $50 or so upgrade for carbon fiber OTAs when buying the scope new if you can.

The carbon fiber tube arrived well packed and wrapped in paper. The carbon fiber looked good and the inside has been pre-installed with high end flocking fabric. The packing included Styrofoam packing peanuts and, as usual, they flaked and stuck to everything. Including the flocking. It took a little elbow grease to get the chips out of the flocking. More on that later.

Now for a step by step explanation of the upgrade/swap out.

Side by side you can see the beauty of the carbon fiber. A high gloss finish and the subtle pattern looks trendy. All the holes are pre-drilled and you just undo the screws on the aluminum, slip the carbon fiber OTA into place and put her back togetherÉ.. not. Get a drill and grinder out for a little adjustment first. 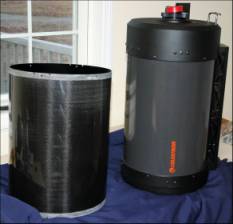 The CF tube is a light weight. Only around 2 pounds. The accuracy of the UPS scale goes away at that weight but it's a good estimate. 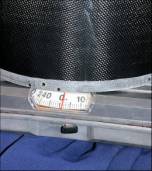 Before starting, place a towel or blanket on a table under a strong light. Have a medium Phillips screwdriver, set of small sockets, and rubber gloves ready. You will want the rubber gloves on in case you nudge the corrector glass or mirror during the change over.

At this time remove all external options such as Dovetail Plates, Finder Scopes and Diagonals. I also put a small mark on the topside of the front and rear castings for lining up later. You want everything to go back exactly as it came apart.

Place the OTA (Optical Tube Assembly) upright facing you in a chair. With rubber gloves on, remove the screws in the metal ring holding the corrector plate in. Make sure you drop nothing on the corrector plate. It's strong but can be broken or chipped. 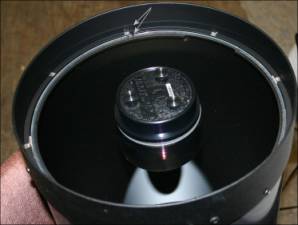 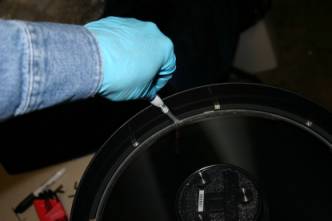 Gently lift out the corrector plate and place it on a table or secure location balanced on the secondary mirror holder (keeps the glass from getting smudges from table tops, etc.). 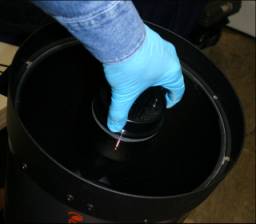 Removal of the front casting:

Next remove the screws located on the portion of the front casting closest to the rear of the scope. They will be located evenly around the OTA. These screws have nuts on them so have the OTA in a horizontal position just in case you drop a nut. You don't want the primary mirror catching it and if it falls it will hit the primary if the OTA is tilted up. 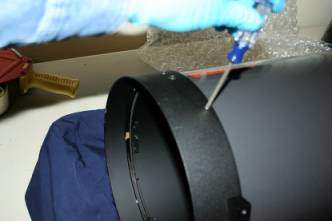 Two brackets on the top and bottom of the OTA located on this front casting. These are the brackets that reinforce the inside of the OTA when you mount dovetails on the top and bottom. You can easily see where there are three screws together and the center one is countersunk. The arrow shows their location inside the OTA (taken after CF install but best illustrates bracket location). 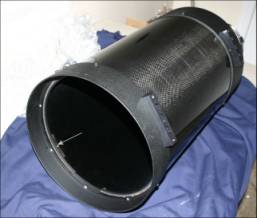 These must be removed but only on the front corrector casting. There are two more on the mirror base casting but they are secured without going through the tube material and are left in place. First remove the outside screws then remove the nuts on the center screws. While holding the bracket inside the OTA, back the center screw out and remove the bracket. Repeat for the bottom bracket. The front casting is now ready to come off. Gently rock it will pull it free. It should slip right off. 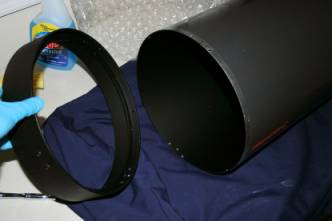 Before removing the Base Casting, rotate the mirror focus knob clockwise until it stops. This will move the mirror all the way to the rear of the tube. This gives much better access to the nuts holding the rear casting on. With gloves on, reach down inside the OTA and hold each nut with a finger while backing out its corresponding screw. Carefully catch the nut when free and put it aside for reassembly. Do not let any fall onto the mirror. It could scratch the coatings and make you say ugly words. Only remove the screws closest to the front of the OTA. There are brackets corresponding to the brackets mentioned above on the back casting too but their screws do not go through the OTA tube material. Once the base casting screws and nuts are removed gently lift the old OTA tube out of the base casting. 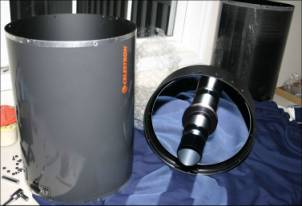 With the mirror and base casting exposed, I checked the "play" in the mirror cell assembly and the baffle tube. Solid as a rock on this OTA. I can see why mirror flop is so minimal on Celestron units. It really looks like a high quality and well machined assembly. Way to go Celestron. 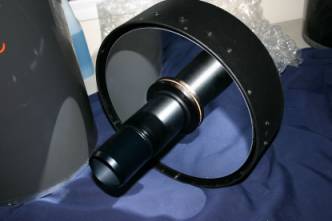 Before installing the carbon fiber tube I slipped it into the front cell. The pre-drilled screw holes matched perfectly. I noticed the holes were drilled in an identical manner on the other end of the tube. However, when compared to the aluminum tube, the holes did not match on the base casting end. The base casting holes in the original aluminum tube were closer to the edge than the CF tube holes. 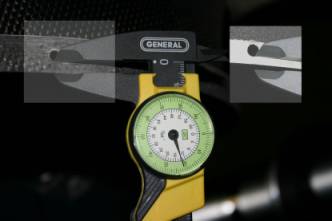 Two holes were also missing entirely. These were straddling the crucial dovetail bracket backing that reinforces the mounting dovetails. This is the marking to drill the new holes. The inset shows the aluminum tube hole positions on the left and the CF pre-drilled holes on the right. 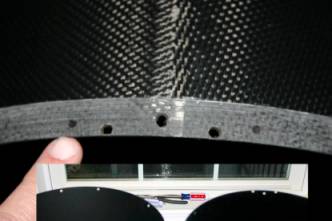 The pre-drilled holes were close enough to the proper position to prevent drilling another hole so the pre-drilled holes had to be "wallowed" out. The base casting screws then fit well. Be very careful if you undertake this. I had a Dremmel tool with a special grinding head that made quick work of elongating the mis-drilled holes. Make sure you hold the CF tube so the filings fall away from the inside of the tube. The tube comes pre-flocked and the little black carbon fiber filings will forever disappear in the flocking to fall out only on long slews of the scope on perfect visibility nights. Mark the missed holes and drill them out. This should not be necessary in future production runs of this product. 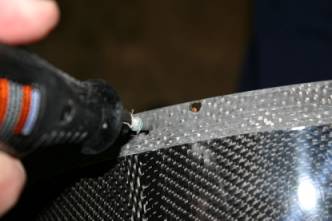 Once all the holes line up it is time for assembly. As mentioned above, the carbon fiber OTA comes with a high quality flocking material already installed inside the tube. However, when the tube was packed for shipment it was placed securely inside a large box with some paper wrapped around the tube. Around this Styrofoam packing peanuts are placed. During shipment the paper on the inside of the tube worked loose exposing the flocking material. The peanuts flake during shipping and the flakes are sucked by irresistible gravitational attraction into the black hole of the flocking material. This, along with the drilling, create a need for a good going over of the flocking material before assembly. Having an Eskimo Spitz as a house puppy has properly prepared me for removing fuzzy white material from all manner of fabric. Use one of those rolling sticky paper fuzz removal tools and roll front to back a number of times until all foreign material is removed from the flocking. In the flocking seam there may be a few threads sticking up. Trim then back with small scissors. 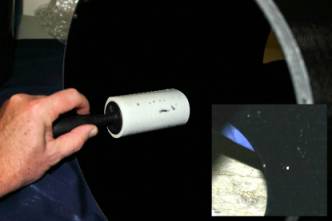 Once the drilling and cleaning are completed you are nearly done. The CF tube slips in nicely. Carefully install the screws around the mirror base casting and secure with nuts held with your finger on the inside of the CF tube. Use the original screws and nuts as they already have a flat black finish. Using other hardware will place shiny objects inside a professionally blackened OTA.

Gently replace the corrector casting and corrector plate. Make sure you align to the marks you made during disassembly. There were some small cork spacers around the corrector when you lifted it out. Put those back in the same position too.

Once completed you have a nice looking C-11 with a shiny carbon fiber tube. 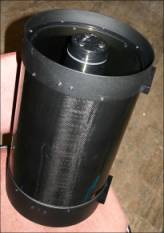 The original aluminum tube is a real lightweight too. I expected a weight savings with carbon fiber but, on my UPS scale, it only amounted to a pound or so.

Here she is with the Losmandy Dovetail and mounting hardware ready to image at 28 pounds: 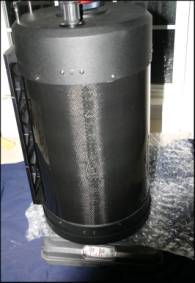 Was it worth the trouble? Depends on what you are looking for. I wanted the CF in order to stabilize focus in long imaging sessions. There is a certain "cool" factor to the look of carbon fiber too. Cooling has been mentioned as a negative on these tubes. Having the OTA in an observatory takes a away a lot of the cool down problems associated with carbon fiber. I've had two other carbon fiber scopes, an 8" Celestron Nexstar and 10" Meade RCX. Both were fine performers and were not that much harder to cool.

The installation was relatively straight forward and would have been a snap if the holes had been drilled to match the base casting and the tube placed in a plastic bag and sealed prior to shipping. I fed this back to the supplier and they will make the changes required. If you plan to image a lot or like the looks of a tough "ding free" carbon fiber OTA, this upgrade is the way to go.