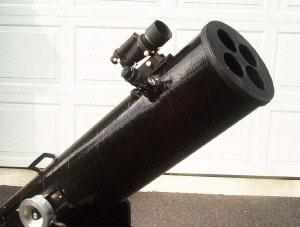 If you own a reflecting telescope it most likely has a spider and diagonal mirror hanging in the light path. You have probably considered making an off-axis aperture mask to aid in observing the Moon and planets on those nights of less than perfect seeing. You would be wasting your time according to Sky and Telescope's editor of the Telescope Techniques column, Gary Seronik. Seronik's principle scope is a 12.5-in f/5 newtonian reflector. Several years ago he made a 5-in off-axis mask and used it frequently to check the myth that large scopes are more adversely affected by seeing than small ones. In the February 2002 issue of S&T Seronik reported that he never did find a situation in which the off-axis view showed greater detail than the full-aperture view. When seeing was unsteady, he said the mask produced a visually pleasant view that was more steady than without the mask. However, he could not see any greater detail with the mask on than with it off. This makes sense to me. Five inches of aperture can never show as much planetary detail as 12.5 inches of aperture.

So, an aperture mask is pretty much a useless device, right? Not according to the makers of the Kendrick Kwik Focus. If you visit the web site you will see several reasons why a MULTIPLE opening aperture mask is useful. The device helps check collimation and aids in achieving critical focus for astrophotography or CCD imaging. It can be easily fitted with white light solar filters. And the Quik Focus can be used to reduce the brightness of the Moon.

Listed on the site are a few more positive reasons for using a Quick Focus. These include splitting double stars, eliminating diffraction effects from secondary mirrors, cancel out some problems with some mirrors (such as a turned down edge), and using the device as an off axis aperture mask to diminish the effects of a turbulent atmosphere.

All of the Kwik Focus devices I have seen have three 2-inch diameter openings equally spaced on a black-powdered aluminum disc. They sell for approximately $35-$75 depending on size. (By the way, I have absolutely no connection with the Kendrick company.) However, you can easily make a very functional multiple aperture mask out of a piece of cardboard or some other lightweight material, flat black paint and some Velcro to attach it to your scope. 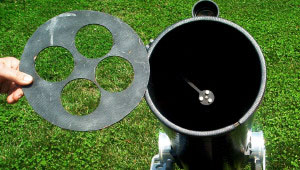 Here is where I recommend a change. Make the openings as large as possible to take advantage of your scope's aperture. It may be beneficial to obscure the outer edge of your primary by ¼ to ½-inch or so. Be sure that the spider and diagonal mirror are obscured. I made one of these for my optically excellent Celestron StarHopper 8-in f/6 newtonian a couple of years ago. Since this scope had a rather thick single stalk spider and a 1.5-inch diagonal I cut four 80mm diameter holes in a disc of 1/4-inch plywood. I glued four small wood blocks on the inside of the mask to hold it on the end of the tube by friction. The multiple aperture mask was then sprayed flat black on all surfaces. There are no mirror clips visible on the face of the StarHopper's primary. The scope with the mask operated with the total light gathering ability of a 6-incher but the light path was obstructed by nothing other than the mask. I used this mask on the bright Moon since my focuser did not have enough in travel to use my variable polarizing filter and I don‘t own a neutral density filter. By using some masking tape (pun intended) and a few pieces of black construction paper it was easy to block out additional openings to reduce the lunar brightness to a level that was comfortable. I used the mask only on the Moon for a couple of years.

On June 13, 2002, the first quarter Moon was very near a bright Venus in the early evening sky. I attached the mask to the StarHopper and focused in on the Moon. None of the openings in the mask were obscured at the time. Pretty nice. Nonchalantly I swung the scope down to Venus. Surprise! The Venusian disc was sharper than I had ever seen it before in that scope. There even seemed to be some faint cloud detail. I raised the magnification from 120X to 174X and the markings were still there even when I rotated the eyepiece. However, since I could not rotate the tube the markings could not be confirmed. Removing the mask gave the usual view: a slightly blurred, super bright Venus that could not be brought into sharp focus due to irradiance. The diffraction spikes were very noticeable and annoying. The faint "cloud detail" was not visible without the mask.

Later that night I used the mask on several deep sky objects. I viewed the double stars Mizar and Alcor in Ursa Major, M57 (the Ring Nebula) in Lyra and M13 (the Great Hercules Cluster). I concluded that the multiple aperture mask (MAM) gave a result similar to a light pollution filter when observing non-solar system objects. With the mask the sky background was darker and contrast was slightly enhanced. The scope was acting with the light gathering of a 6-inch reflector but there were no diffraction effects other than the circular edges of the mask. These effects were virtually invisible when the image was in focus, perhaps similar to the effect of curved spider vanes. Without the mask, though, the images were brighter and a few more stars in M13 were resolved.

The gas giant planets ruled the night sky this past winter. The MAM often improved the image of Jupiter, especially around opposition. It reduced the glare and made seeing subtle details easier. The mask had little or no effect on Saturn since it has a much lower surface brightness level. I made a mask for a fellow astro club member who has an Orion XT10, a 10-inch f/5 newtonian dob. He reported similar results. I am not saying that you can see more detail with the multiple aperture mask compared to using your full aperture. With the MAM you can eliminate some "noise", reduce irradiance and see details that were lost in the glare before. The MAM will not replace the effects that color filters have on the planets. My conclusion is that this is a useful device when used to view objects with a very high surface brightness. The Moon, Venus and Jupiter are obvious targets. It also seems there is another suitable target right now. Can anyone say "MARS"!!! Much of the time I have observed Mars this summer in the pre-dawn hours was with the MAM attached. Many times I took off the mask and used color filters. As often as not the best overall view was with the MAM and no other filtering. When the sky brightened with the coming of dawn the mask was removed.

Should you make a multiple aperture mask for your reflector or Schmidt/Cass? Why not? It is a cheap and easy project. By using multiple openings you can utilize more of your scope's primary mirror light gathering power. This device is most beneficial on the Moon and bright planets near opposition. It also offers a low cost alternative to help sharpen up blurry full aperture images of deep sky objects on those nights of really poor seeing. Try it, you'll like it!