Confessions of an Eyepiece Junky 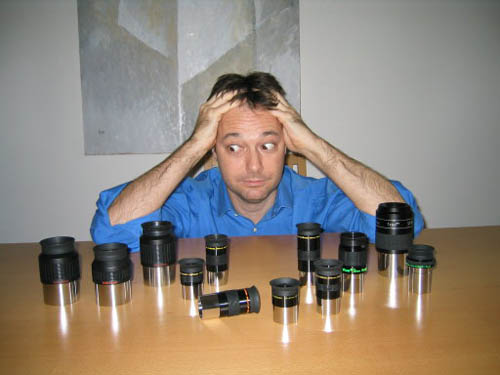 My name is Ric, and I'm an eyepiece junky.

There, I've said it now. It's a sad state of affairs when a grown man has to admit such a thing to the whole world, but my wife was very clear on the matter: if I'm going to get through this, then I'm going to need the support and understanding of my peer group. That's you.

So how did this all come about? When did an eyepiece stop being a lump of metal and glass, and start being something that I day-dream about? Why do I have a spreadsheet on my PC composed of row after row of different eyepieces that I own, with focal lengths, magnifications, apparent fov's, true fov's, etc etc. Why have I acquired an excellent Ebay rating, simply due to an inordinate amount of eyepiece trading I've done? How did that innocent interest in acquiring a decent selection of eyepieces, turn into this unquenchable thirst for all things ocular?

Read on, my friends, read on...Lost in space

My ETX-105 came with the ubiquitous Meade 26mm super-plössl, plus 12.4mm and 9mm eyepieces. Little did I know I already had a quite a good selection, giving 56x, 118x and 151x powers. I just needed something to fill in the gap between 56x and 118x, and I could get on with my former junky-free life.

But no, I wanted more!

I hungered for more magnification, thinking my maximum of 151x was a bit low for my theoretical 50x per inch. Something more like 200x would be closer to the mark, and maybe even more. More power... MORE POWER!!! I read review after review of the joys of high-power, wide-field eyepieces, especially Naglers. Oh my, Naglers were on everyone's wish list, so they might as well be on mine. Those 'space-walk views' were clearly for me, oh yes.

306x was for those "nights of perfect seeing", you understand.

It didn't take long for disappointment to set in: no amount of focusing and refocusing was going to force the ETX to show anything more than a faded blur at magnification above 200x. When used on the planets, the 9mm Nagler offered a 30' field-of-view, but that didn't seem to be worth much over the 20' that my Meade 9.7mm gave me. Who wants to see more blackness (grey actually) around Saturn? It was a better story with the 12mm Nagler, where the field-of-view at 122x really did seem vast compared to the Meade 12.4mm, but by then I'd become a tad disillusioned with all things Nagler. The 4.8mm and 7mm Naglers remained in my eyepiece bag. The bigger, heavier 9mm and 12mm Naglers were used from time to time, but it's amazing how handy I found those original Meade eyepieces.

The Naglers left my life, and would eventually sold, much much later...Super-plössls nirvana

151x was for those "happy hours of perfect seeing", you understand.

For a while I was contented, but then something strange started to happen: I was spending all my viewing times swapping eyepieces around just to see how this or that object looked with this or that eyepiece. Eyepiece hopping, I called it. Looking at Jupiter embedded in the Beehive (Praesepe) last Spring, I realised that the 40mm gave me about a 1° field-of-view, which when compared with the 1° field-of-view I had with the 32mm, meant that I had one eyepiece too many; so I quietly sold the 40mm.

I also realised that the focal length of a typical Maksutov telescope is such that few if any eyepieces would give a larger field-of-view anyway. Yes, folks, the ETX had to go.Zooooooooooooom!

By early summer, I'd swapped the ETX for a Borg 100ED refractor, which has a 640mm focal length. My eyepiece woes began anew; those sensibly-spaced magnifications that my remaining super-plössls had given me on the ETX were now looking a bit, er, compressed: 20x, 24x, 32x, 42x, 51x, 65x. I felt a little brutal, but clearly every other one had to go... some day soon. Meanwhile, I was spending even more of my time eyepiece-hopping. That's the problem with having too many eyepieces, you spend more time swapping and refocusing than actually viewing. That and the cost. And the weight of the eyepiece carry case.

160x was for those "fleeting moments of perfect seeing", you understand.

I thought about a few Radians, but I'd learned at least one of my past lessons well: my highest powers were the ones I needed least, so why spend $240 each ($720 in total!) on eyepieces I'd rarely use? Then I heard about the Nagler Zoom 3-6mm. Folks, this was the answer to my dreams: it consolidated my high-power eyepiece requirements into one compact work of art.

Still, after the $750 carnage of the first foray into Naglers, plus the $350 super-plössl breeding programme, $380 was looking like a good decision. And remains so: it's a wonderful eyepiece, and I can't recommend it enough.

So there I was, a single Nagler Zoom for a range of high powers, and a string of super-plössls that I might as well keep, plus... er, I bought a 3mm Radian cheap(ish) on Ebay. Well, it would have been crazy to pass up on that one... and what about that hole I had in my collection between 65x and 106x? Er, the one I sort of filled with a brand new 9mm Nagler Type 6 at $280, giving 71x. Oh, and I found another 26mm super-plössl for only $30, so I had that one as well. As a back up, you understand.

And yes, I'd made a good choice: it gave me 21x and 3°45' on the Borg. That's how we wide-field afficionados describe our wide-field eyepiece performance, by the way: we give the magnification, followed by the true field-of-view. For the first time ever, my binoculars remained in their case as they'd met their rich-field match. Many an hour was spent wandering the light and dark lanes of the Milky Way, day-dreaming (Late-evening-dreaming?) of the many potential planets that simply must harbour life out there... in fact I enjoyed myself soooo much, that I wanted more. Much much more. Which is why I ordered a set of Antares Erfle 2" eyepieces, that's the 32mm, 40mm and 52mm, giving 20x and 3°30', 16x and 4°, and a monstrous 12x and 4°30'.

Oh boy, I really couldn't wait to compare those Erfles with the 30mm 1rpd and the 32mm super-plössl, just to see which one of these is marginally better suited to ultra-wide viewing... and... and...Wake up call!

It was around now that my wife finally lost patience with me, and called me an eyepiece junky to my face. I was reluctant to admit I had a problem, of course, but she was quite right: almost every eyepiece I'd bought had a rationale, at least at first, as had every eyepiece I intended to sell again. The eyepieces on my 'to sell' list never seemed to actually get sold off, of course, but there were further rationales for that. When I opened my eyepiece carry case, I would swear that they were breeding. And you know what, there were too many in there to know for sure.

And even then, after all that time and money, I seemed further away than ever before from my ideal collection.

The magnifications I had were far too closely spaced: I had seven medium power eyepieces; four low power eyepieces; and four ultra-wide field eyepieces. I also had six high-power eyepieces, but at least four of those were contained in the same, small Nagler Zoom body.

Yes, I had a few too many eyepieces.

Something had to be done; my wife said so, and she's usually right about these things.Back from the brink

One piece of luck did come my way: my friend bought three of those four original Naglers, although the 9mm Type 1 remains unsold. Still, I was down to a mere fifteen eyepieces, so I could easily count them on two hands and one foot. Nope, this wouldn't do; I had to find a way of getting rid of more.

I spent a long time looking back on my experiences, both good and bad. A few lessons have been learned, but it seemed like a few more wouldn't do me any harm. I needed a set of well thought out eyepieces, with a sensible range of magnifications. I needed wide-fields for low or ultra-low powered viewing, but not necessarily for medium or high-powers. I needed as few eyepieces as possible to stop any temptation to hop between magnifications. I needed to put a sensible upper limit on my highest power. But most of all, I needed a collection that would get used, simply because it matched the kind of viewing that I enjoyed the most.

It was time for an honest appraisal of the kind of viewing I like the most.

I've found that I like ultra-wide-field views of the Milky Way, and the larger deep-sky objects such as the Andromeda Galaxy, Persues Double Cluster and the Pleiades. For this, I need an ultra-wide eyepiece. Just one, no more. I shall make a final decision as to which of the four (Four! What madness!) I shall keep, and the rest will be sold on Ebay. The money's on the 40mm Erfle at the moment, giving 16x and 4°, but who knows. I like all of them, even if they more or less do the same job. Might as well ask me which limb I'd like amputated. Harrumph!!!

And then I need a low-power eyepiece for general use. Can't keep slotting a half-kilo monster into the diagonal every time I want a quick peep at the Orion Nebula, can I? A low-power eyepiece for casual use must have a 1.25" barrel, so I shall keep one of the 26mm super-plössls, at 24x, and sell the 32mm and 20mm super-plössls, and (of course), the back-up 26mm. I'll just have to risk being stuck if I lose one.

I shall keep the 15mm super-plössl (42x) and the 9mm Nagler Type 6 (71x) and sell the original 9mm Nagler, and of course the 12.4 and 9.7mm super-plössls. Thank God, the 12mm Nagler's already sold. Two medium-power eyepieces are enough for anyone.

And high-power? Well, I am not, and shall never be a lunar or planetary specialist, but every astronomer is sooooo bombarded with requests to see Saturn's Rings, the Moon's craters, or Mars Mars Mars Mars! Well, I'd hate to be the one to discourage even the most fleeting of interests, so one tries to oblige. And to oblige a casual passerby, one needs high-power. Of course, it's important that the knowledgeable astronomer takes some time to ensure Jupiter's properly in the filed-of-view, and Mars' southern icecap's properly in focus... ok, I actually love looking at the solar system objects. I also like looking at globular clusters, so I need a high-power eyepiece, like everyone else. I shall sell the 3mm Radian (used just once) and keep the Nagler Zoom (used many times). The 4.8mm and 7mm Naglers are already history, bye-bye.

Here's what I'm left with:

I have seen the light. In fact I've seen it through an extensive range of different magnifications. Five eyepieces really are enough for anyone, even a confirmed eyepiece junky like me. Each of the remaining eyepieces has a clear purpose, and will only ever be replaced if I can justify it with a fundamental leap in performance. Which is unlikely, my wife tells me. And my sad addiction? Well, I'm feeling much better now... although I'm afraid I'll remain a confirmed junky for the rest of my life.

Hmm... let me see, I could replace those last super-plössls with 15mm and 24mm Panoptics. Oh, and I've heard the new 41mm Panoptic's a wonderful ultra-wide......