Find below the results of the ongoing efforts to get kids interested in amateur astronomy. Cloudy Nights is determined and working towards the goal of getting more kids interested in the pursuit of amateur astronomy. To this end we are sponsering ongoing offers and challenges and publishing the results on this page. At the top of this page is our "Kid Counter" which shows the number of kids who have participated in these various projects. It is my hope that over time this counter will become quite large due to the generous efforts of those amateurs willing to lend a hand and participate.

Volunteers for this program were sent an eyepiece and asked to show at least 1 kid 1 object on 1 night. Here are the results

Thanks. In a word, Outstanding! I had four neighbor kids over the day I got it and last night we had the Cumberland Star Party, 15 people - 4 adults/11 kids attended. Fabulous night, crystal clear dark sky. As agreed, more to come on that later. Most impressive observation last night with the 8mm radian - the depth and clarity with which this ep penetrated into the stars of the double cluster. Thanks again. edz

On Wednesday, October 10th, I took your 10mm Televue Radian eyepiece to Walnut Creek Christian Academy, where our two boys Michael and Matthew attend the Junior High and Elementary schools, respectively. The day before, I had requested the vice-principle to distribute a flyer to each of the teachers from Kindergarten through 8th grades. There were a total of 350 students that attended our "Daylight Star Party" as we viewed the 44% illuminated last quarter moon and several sunspots from 9:30am to 11:30am PDT.

I set up a Celestron 102mm f/5, 500mm, Wide View scope, mounted on a Celestron photo-tripod, which yielded a 50X image of the moon and sun with the 10mm Radian eyepiece. The sky was a crystal-clear blue and provided extremely steady views of both celestial objects. The comments I recorded were "neat, tight and wow!" Some of the older kids expanded on the nature of the moon's cratered topography(8 or more craters seen) and on the nature of the black-colored sunspots(about 3 thousand degrees cooler than rest of the sun).

It was pretty simple to guide the children to place their eye approximately ¾ inch from the Radian eyepiece in order to best view the moon and sun for a maximum alloted time of 30 seconds each; although some children took as little as 3 or so seconds to take a "look." I had to reposition the scope about every minute or two as the Radian yielded a field of view of 1.2 degrees.

Several children wanted to know how much the scope cost. I let them know it was $329 and was just a bit more than the Radian eyepiece. I trust that this "introduction" to astronomy for these kids will perhaps spark their interest to continue to view the heavens. I also verbalized to the children that the should appreciate that each of the sunspots was about the size of the earth and that about 1 million earths could fit within the volume of the sun.

I plan to have another "night-time" star party at the school during March 2002, when we can view the 1st quarter moon, along with the planets Saturn and Jupiter.

Thanks Allister for the opportunity to review the Radian eyepiece. It was my pleasure!
Gratefully Yours, Wing

I took my niece out this evening to observe the close proximity of Jupiter to the Moon. The Ikeya-Zhang comet was lost in the haze of light pollution to our west, so I let her choose our first target. Her choice was the Moon, so I popped in an RKE 12mm eyepiece into my Starmax 102, and showed her how to work the slo-mo controls and how to focus.

"Whoa! This is too impossibly cool!" was her reaction to the sharp relief of the mountains and craters along the edge. After spending some time on the Moon, I let her slew over to Jupiter. I asked her if she noticed the bands across the planet. She replied yes, and that there was a "bubble" in one of the bands. Of course, she'd discovered the Great Red Spot!

We swung the scope up to Saturn next. Titan was exciting, as was the Cassiini Division, but when she found the shadow of the rings across the planet, she said, "I have got to get me one of these!", referring to the scope. Though much of its glow was muted by the Moon's brilliance, we next trained on the Orion Nebula, and finished up with a quick look at the Pleaides, which she called a "mound of stars close together".

After nearly an hour, and the penetrating cold chased us back inside after what for her was a transformational experience. And for me, it was a chance to share my passion for the night sky. Good stuff all around! 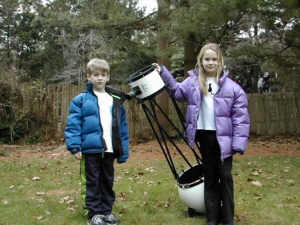 When Allister gave me the chance to try his 10mm Radian on my scope, I jumped at it! I have an 8" PortaBall f6 scope, and am looking to buy an eyepiece in this size. It was nice to try one first. My two children, Amy (age 10) and Nate (Age 8) observed with me.
I was really pleased with how well the Radian worked with my scope. I was using it at a magnification of 122x and at 244x (with a Tele Vue Barlow). We looked at a variety of Winter objects, Jupiter & Saturn, M42/M43, Aldebaran, the Pleiades and the open cluster M37. I asked the kids to write a couple of sentences about the evening, here is what they said:

Amy: Last night I looked through my Dad's PortaBall. We saw the yellow-green planet, Saturn. With the telescope we were able to see Saturn's rings. We also saw Jupiter. Jupiter had two red stripes on it. One skinny stripe and one thick stripe. I enjoyed looking through that eyepiece, I had a great time.

Nate: Last night I looked through my Dad's telescope using a Radian eyepiece. I saw Saturn's rings and two red stripes on Jupiter. Some of the stars I saw were red! I found Jupiter by myself.

All in all, it was a great evening! Thanks Allister for making it possible! 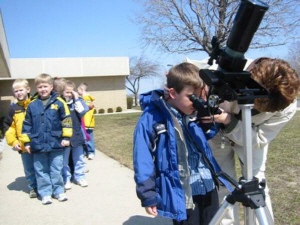 Well, now you are probably wondering, just how many students did I solar observe with on that sunny afternoon? We ran around 300(!?!) kids and 15 adults
through in a single afternoon. It was a true marathon. My only regret was that they couldn't have a little more time at the eyepiece. Maybe next time I can find
another amateur astronomer in the area who can give me a hand. If you are from Michigan's thumb and would like to help out, *please* drop me an e-mail. Read Tom's complete article here

Astronomy doesn't get a lot of press here where I live in eastern Pennsylvania. However, the schools did report about the somewhat unusual alignment of 5 planets (Mercury, Mars, Venus, Saturn, and Jupiter) being visible in the western horizon in early May. I live in a neighborhood with lots of kids and several of them, knowing that I own a couple of scopes, asked me to show them the planets over the weekend of May 4th - 5th. I told them that we didn't need the scopes to see the event, but they persuaded me to bring one out anyway.

Saturday was cloudy but Sunday was ideal. By 8:30pm I had a small gathering out in my front yard for what I assumed would be about 20 minutes of looking at the planets. My skies suffer from particularly bad light pollution, so Mercury was nowhere to be seen. However, Saturn, Venus, and Mars formed a perfect equilateral triangle in the western sky and Jupiter was high enough to not be affected by the pollution. The kids, most around the ages of 10 - 13 really enjoyed the unusual alignment as well as the views of the planets through the scope even though little detail was evident in Mars and Venus. Saturn's rings drew a lot of expressions, as they always do. Finally, the bands on Jupiter and 4 moons were a very nice site.

At this point, being a "school night", I was about ready to pack it in when the kids insisted that I show them some more "stuff". Thinking for a minute, I decided to try to show them as wide a variety of objects as I could in a short timeframe. First I pointed out a couple easy constellations: Ursa Major and Leo. I then talked about how you can use constellations to find objects in the night sky (especially since I don't have a GOTO mount). Using Ursa Major, we searched for the galaxies M81 and M82. These were easily found and I had the opportunity to discuss what galaxies are and how far away they are from us. I don't know what they are teaching in school, but many of them didn't know the difference between a solar system and a galaxy. Quite alarming to me! We then looked at two double stars, Castor and Mizar. I had a preconceived notion that double stars would be "boring" but was quite surprised to find the kids were really interested in them. The next object was the globular cluster, M3. More explanations about globular clusters followed and then we finished with the open cluster M44 in Cancer.

What started out as a 20 minute viewing session had turned into a viewing experience of four planets, one galaxy, two double stars, one globular cluster, and one open cluster that lasted for more than an hour and a half. The kids remained interested the entire time. What really amazed me was that a couple of them went and tried to get their parents but none of them would come out. It was a great time and just goes to show how easy it can be to get kids involved in this hobby. I've done the same type of sessions with my son's Cub Scout troop with similar results. Please take the time to either volunteer an evening with your local boy or girl scouts, school groups, church groups, or at the very least, kids in your neighborhood. The smiles on their faces and gleams in their eyes will outshine the stars in the sky.