As amateur astronomers we are the "Gateways to the Cosmos" for the general public. Even though most of us are not employed professionally in astronomy we are often times regarded as equals to the men and women who make astronomy their profession. This is a responsibility that every amateur must recognize as a gift and an opportunity to make a difference in someone's life. An introduction to the wonders of the night sky at an early age can guide a youngster toward a lifetime of joy and learning.

The following scenario has no doubt repeated itself hundreds of times throughout the world. What is done following it is very important to winning someone over to the hobby of amateur astronomy.

It's a warm summer evening and you have you're favorite telescope and star charts setup in your back yard. Deeply engrossed in finding that elusive 12th magnitude galaxy that is supposedly an "easy find" you are startled by the following question;

As serious amateur astronomers sometimes it is hard to drag ourselves away from an intense night of galaxy hunting or planet sketching but the payoffs of introducing someone to the night sky are much greater than a sketch. Chances are the young people that have inquired about your activity will not be interested in the details of what brought you to that certain moment so don't overload them with technical jargon that may scare them away. Just explain that you are an amateur astronomer and are studying the night sky. Then offer them a look through your telescope to let them see what it is exactly you are looking at. If it is high power double star or planetary work that you are doing then the view may not be very pleasing or have that WOW effect or not be visible at all to the untrained eye. If this is the case then take a moment away from your object and pop in a lower power eyepiece for a look at one of the brighter WOW objects. A good object that they may like is the moon if it happens to be in the sky at the time. If not then some of the brighter deep sky objects may work but may also require a little more explanation. Some good summertime objects include M13, M57, M27, or Alberio. They are all within or near the Summer Triangle. Remember that it is the first impression that will win them over. If the view is crummy and the object is barely detectable then the youngsters may live the rest of their lives with that one not-so-great first impression of astronomy.

If they appear to be interested then entertain any questions that they have while still keeping in mind to avoid technical talk that may be a turn off to the person who is being introduced to the wonders of the Universe. Let them set the pace. After they view an object then aim your scope to another bright object of interest. Remember; don't try to teach them in one night what took you 10 years to learn. Depending on personalities some kids may rattle off several questions per minute while others my look for a while and then ask a question or two. Use the old adage; "There is no such thing as a stupid question." Think back to when you were a kid and some of the questions that you had about the world around you. I can remember wondering why spacecraft that we sent into outer space did not bump into stars when they were up there or why stars never appeared on the inside of the moon when it was a crescent. There will of course be the obligatory UFO questions and the "Have you ever looked into your neighbors window with that thing?" type questions. Remember that with today's youth you are competing with stereotypes that have been introduced by television and movies. Just answer questions as best as you can and if you don't know the answer then just say, "I don't know but I could find out for you." 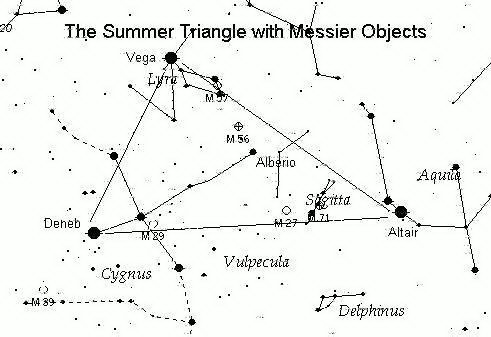 If after your initial pitch they are still interested in what you are doing then tell them about the different ways that they can participate in the hobby of amateur astronomy. Tell them that the best way to start out is to learn the night sky without any telescope or binocular at all. Point out the Big Dipper and explain that you don't need any optical aid to study it. Show them Alcor and Mizar and explain how you can separate the two stars with just your eyes. Show them the "Summer Triangle" with its 3 bright stars Vega, Altair, and Deneb and indicate that they are very important jump-off points to finding other objects. Show them your star map and what the triangle looks like on it and the various objects within "star hopping" distance of them. Stress that the triangle is always visible during the summer months.

Tell them about Astronomy and Sky & Telescope magazines and even Jack Horkheimer, PBS's Star Gazer, as good sources of information about the night sky. Tell them to go to their school or local public library and check out some books on astronomy. Tell them that they don't have to be a "wiz kid" at math to enjoy the hobby. I always tell them that all that they need to know how to do is read.

After pointing out a few naked eye wonders of the night sky then explain that binoculars will show thousands of more stars and objects and that a telescope will show millions more. They probably are more interested in your telescope than anything else so you may want to explain how it works and how there are many other sizes and kinds of telescopes most of which don't look like the telescope that comes to mind when people here the word.
If the interest continues then you can maybe set up another time in which they could come back for a look. Remember to have them get their parent's permission or even better suggest that the parents come along. It would be ideal to invite them to a local club meeting or star party so they could get the perspective of other amateurs who may have other ideas and expertise.

Hopefully by the time that they leave for other adventures they will have a better idea of what the rest of the Universe looks like and how it is easy and even cool to be an amateur astronomer. Chances are that this might be their only exposure to the night sky for many years. Some may forget about it and choose some other passion in life but at least you made your best effort in introducing the night sky to 3 more people. Just maybe one of those youngsters will pursue the hobby with even more enthusiasm than the person who first introduced to them this wonderful hobby.