This is an update to the original Comet Couch article published in Sep 2003.

First off, I thank all of the people that have written me over the past few years for your kind comments and requests for plans, photos and clarifications. I have very much enjoyed letting people know about my Comet Couch and will continue to help anyone out there that wants to build a chair of their own. I can be contacted at ecart AT optonline DOT net.

Over the years that I have enjoyed using my CC, I have had but one dissatisfaction. Mainly the fact that there were too many weights to carry, install, store, etc. I knew that had I incorporated a different binocular mounting arrangement on the end of the parallelogram, I could eliminate altogether the counterweights attached to the binos themselves and therefore some of the counterweight on the parallelogram arm. But what to use? That question got answered at the NEAF gathering where I happened to visit the Universal Astronomics showcase. There I saw their latest heavy duty hinge for binoculars which they use on their UniMounts. It was just what the doctor ordered. Later in speaking to Larry Patriarca over the phone, he explained how the different pieces went together and what accessories can be ordered for the hinge to allow many different binos to be quickly mounted, etc. Larry has the patience of a saint and was very helpful in answering all of my questions. I placed an order for UA’s heavy duty hinge and “L” platform. When it arrived, I was duly impressed (as I was at NEAF) at how smoothly the joints on the hinge moved, how easily they were locked into place with a simple twist of a knob and of the overall beautiful anodized finish on the piece.

I fashioned a new end piece for the parallelogram arm out of oak which had a dovetail slot in it that took the metal dovetail piece on the new hinge (see photo 1). 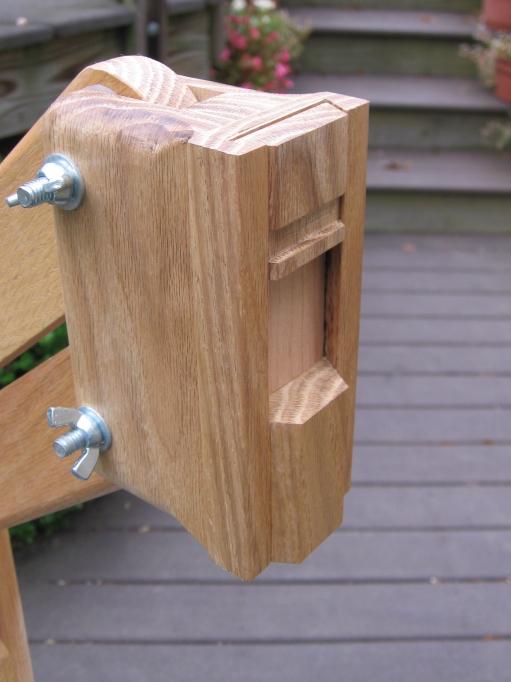 But the problem was that the size of the hinge plus the L platform was quite a bit longer than the wooden knuckle that I had designed originally. This put the binos further out on the arm than what I needed. I calculated out the difference in the distance and lopped off the required amount off the top half of my parallelogram arms. This put the binos at the right distance outward but now due to the shorter para-arm, the binos were too low. Some further trial and error showed that the column that the arm is attached to needed to be raised by about 5 inches. Now the proportion and the geometry of the unit allows the head to still pivot in a way that keeps the binos centered over your face whether they are pointing at the horizon or straight up at zenith (see photo 2). 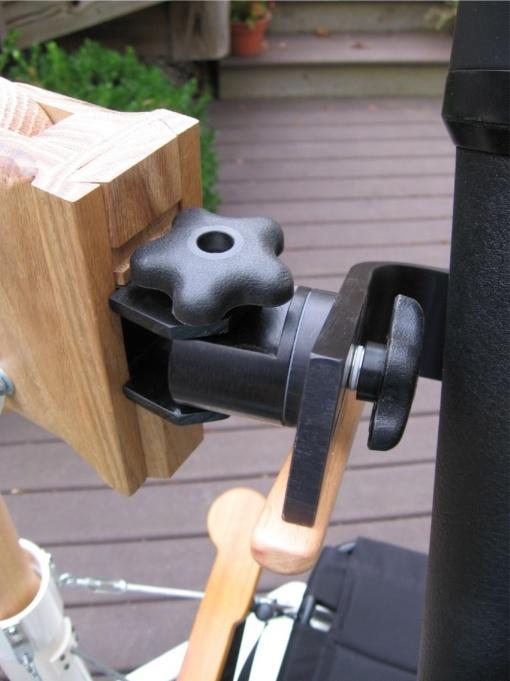 The bino 2.5 lb. counterweights are now gone as well as 7.5 pounds on the parallelogram arm. Additionally, where I used to have to steady the binos with one hand because they would tend to rock a bit on the pin hinge I had earlier, the Universal Astronomics hinge allows me to set the friction of the joint and the binos can be used completely hands free (see photo 3). 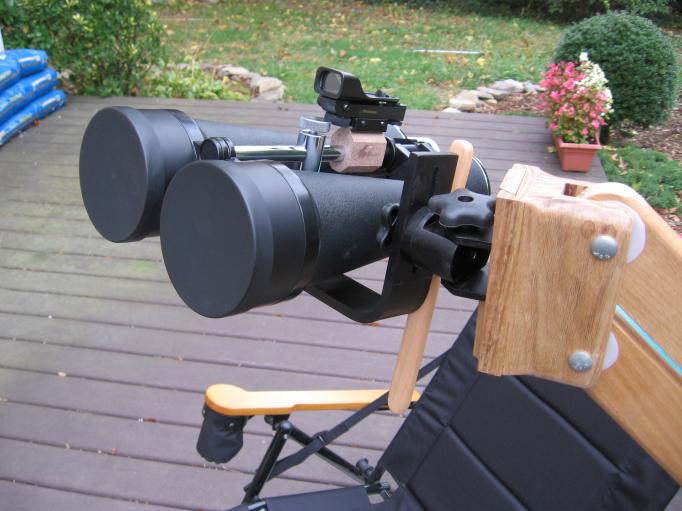 They simply stay were I put them without any drift. My Comet Couch, which was a pleasure to use before, is now lighter to carry, easier to set up, even more comfortable to use. I cannot imagine a better way to use binoculars (see poto 4). 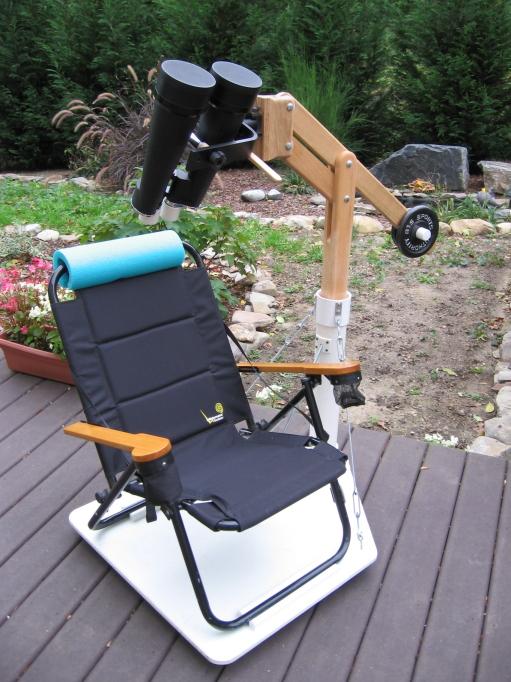