Please make sure you know what you are doing as far as the wiring, fuses, breakers, etc before you undergo such a project. The following is my own personal project and how I went about accomplishing it. I am not a licensed electrician nor can I guarantee my wiring will work for your situation. I am not responsible for any problems/issues you might have by following my example.

One project I have wanted to do for a while is a power box that I can take in the field or use at home for my astrophotography. I have a couple “Power Packs” but their amp-hour capacity is very limited and to make it worse, they do not cope well with frequent moves that the military has required as they tend to end up on a boat somewhere or in storage for months before our household belongings arrive and by then are long dead and do not like to hold a full charge anymore. My solution is to make a power box with a deep cycle battery at the heart. Not only will this allow for much longer sessions before my battery power dies, but they tend to do better if they get completely drained (still not recommended, but once every 3-4 yrs should be ok) and if I build a box of my own I can replace the “heart” when it is necessary as opposed to having to buy a whole new “power pack” - a cheaper prospect in the long-run for sure. There are a few commercially available ones, but these are expensive and still do not have the amp hours I would like and I figured that I could build one for the same or less and can customize it, add on as I wish over the years, and it gives me a good fall/winter project. Before I began I wanted to thoroughly plan this out as I had not done anything with Electrical Engineering knowledge since multiple college courses and had only done minimal wiring in the years since (on a previous astro project). I needed a refresher course to jog my memory and make me feel comfortable. I knew what I wanted to come up with in the end and the rough layout of the wiring, so I read up, asked friends, and sent my questions to others that had done similar projects. After a few days I had acquired the knowledge I needed and had my plan all laid out and began ordering parts.

Let’s start with the requirements for my particular box. They are based on my current setup, with a little room for growth, and a few “nice” things I wanted to add.

You might be curious what #s I used to come up with my requirements. I knew I wanted 6 lighter-type sockets based on my current devices and accessories I might put on. I also wanted at least a 7-port USB hub as I current have a 4-port and am using all of the ports so wanted to have a little extra room in this box. I then had to determine what size I needed for the battery. To calculate this I first had to add up all my current “loads”:

First I calculated what size Inverter I would need:

I knew that I would have a 40A max on my distro box, so I first calculated the Max W inverter I could use using the following calculation

Then you have to divide by the Inverter efficiency since no gadget is 100% energy efficient. So our final equation would be:

However, I knew that I was planning on a 30A circuit breaker for the whole system. I needed to calculated the optimum inverter size based on this so:

This is with peak stated inverter efficiency. If I assumed that it would not always work at peak efficiency and went with an 80% efficiency I got a max of 450W inverter, knowing that it was exceedingly unlikely I would ever come close to maxing out its potential. I went ahead and went with the 450W, though, as I found a great deal on one.

Next, I needed to calculate the amp draw my devices would have:

The Inverter’s no-load amp draw is 0.35A so factoring that in brings the devices to 6.92A with no load, factor around 13A (based on random research I did if I plugged in, say a secondary laptop for charging) for an average if loaded brings the max to 19.92A (plus a little here and there for the LED lights, but those should be negligible)

USB Hub: As I was planning a 7-port hub I could have a max draw of 3.5A, however using each port at max draw was unlikely. I did not set up the usual devices that I plug into a hub to test the draw as I do not have a shunt or ammeter (doing this would be ideal, however) so I assumed an average draw from the hub of 1.5A for my calculations [note: this is just a random assumption by me - I hope to eventually test the draw, but was not able to do this at the time]

I would not be using the inverter much, only occasionally, so I wanted a realistic # for figuring my battery size. Therefore I figured up a calculation based on two 7-hr nights with no inverter use and got:

Ideally I would get a 225A-h battery based on these #s. Well, such a battery is REALLY heavy (the ones I looked at were around 40kg) so I compromised on a 140A-h battery which was around 27kg as the #s for Amp draw without the dew heaters were more suited to the 140A-h battery. This will not get me 2 full nights in the field with no charging based on the #s calculated, but should get me a decent amount of imaging time before I drop the battery to 50% and was acceptable to me. The 140A-h battery will give me about 9 hrs at the above calculated draw before hitting the 50% mark - and considering the dew heaters won’t always be used I will generally get around 11 hrs ... not too shabby!

Once I had determined what all I wanted to include I was able to draw up my wiring diagram: 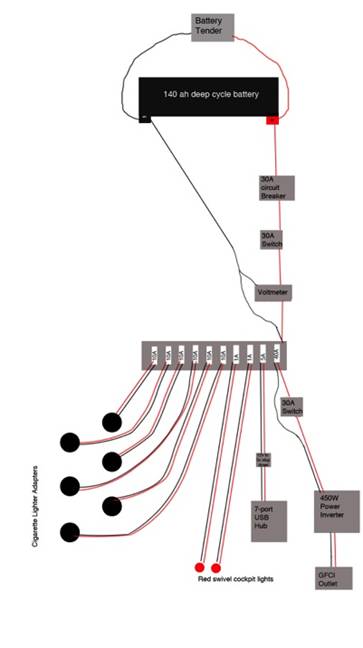 Labels in the diagram (for easier reading of small text)

All my requirements and wiring plan had been sorted now, so I started part hunting. I was looking for a decent balance between quality and cost (as I was working on a relatively strict budget for this project). As I am currently living overseas and sourcing things locally would be very expensive for me (based on the current exchange rate), I did most of my part shopping online except for the deep cycle battery, which I got from a company in-country that would deliver it for free. These are the parts I went with:

After parts were ordered and therefore I had dimensions I redid my design diagram (I had a rough one I started with for concept and deciding what I wanted). I wanted to make sure I left enough room to run the wiring without anything being crimped. The brown vertical line is to show that the inverter will be below the deep cycle battery as I am planning a palette-type lower part of the box that the battery will sit on and with the inverter below the battery it will isolate the inverter in (the unlikely) case of a spark being thrown, which I had heard was a remote possibility. The design is shown as if you fold open each side panel and with no top. The sides will not open and the CL sockets and AC outlets will go to the outside (via a 1ft extension cord and GFCI outlets), I just showed them on the inside so I knew where I wanted everything. I am planning the front panel (on top) to have the voltmeter, the master switch, and the cigarette lighter sockets. The distribution box and circuit breaker will be mounted on the inside of the same panel (space dependent). The back panel will have the power switch for the GFCI outlets, the outlets themselves, and the USB hub. The two side panels will have the red swivel cockpit lights and one side will have the USB type-B out port while the other will have the out cord for the Battery Tender. Things might get moved around as they need to to fit in the box correctly as I build, but this is the plan as I began. 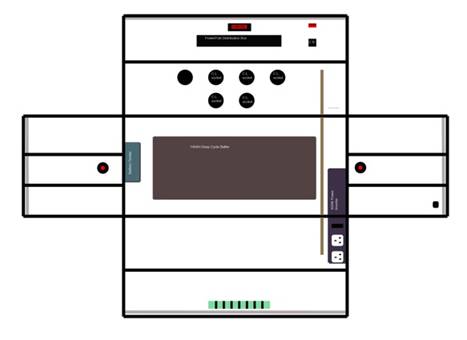 Now for closer labeled images of the wiring. 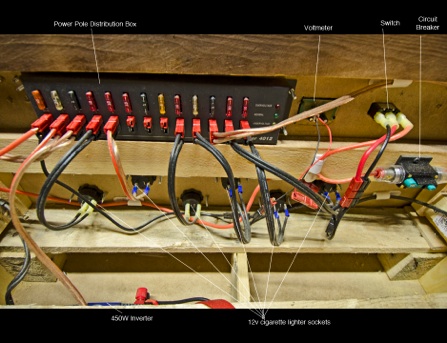 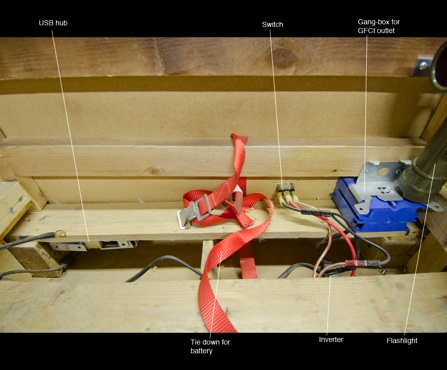 Here are some images of the final power box (pending one more layer of paint): 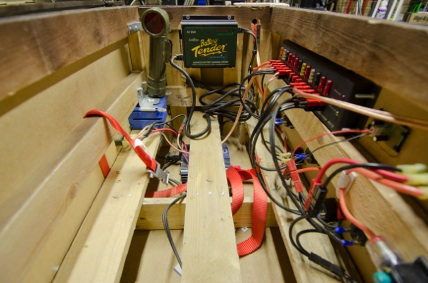 The Green/Yellow/Red box on the lid is a voltage/state of charge chart.

Top-down view of entire box minus the battery: 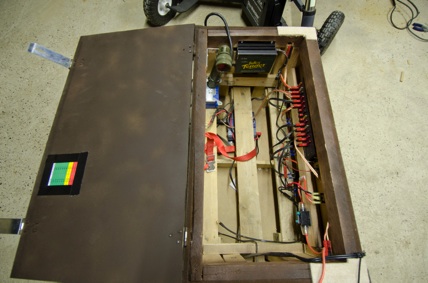 From the front with the lid open and battery tied down: 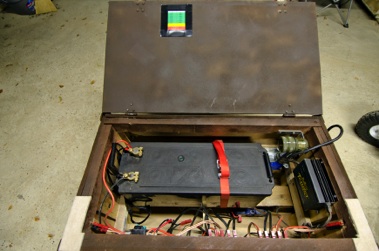 Side view - side with USB out port (from hub), RAM mount for iPhone, and one of the red LED swivel lights 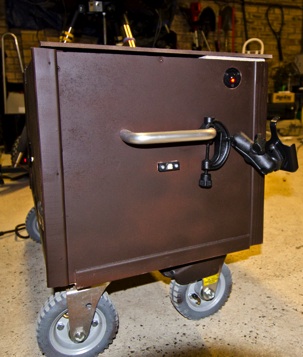 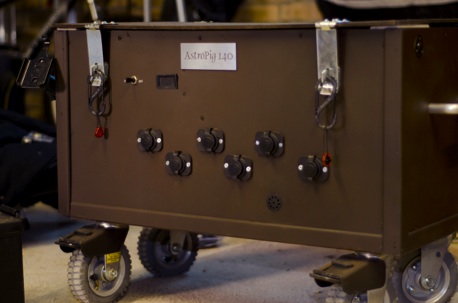 Back: 120V GFCI outlet (which will be downgraded to regular 120V outlet, see conclusions for why), inverter’s power switch, air vent (for inverter) and 7-port USB hub 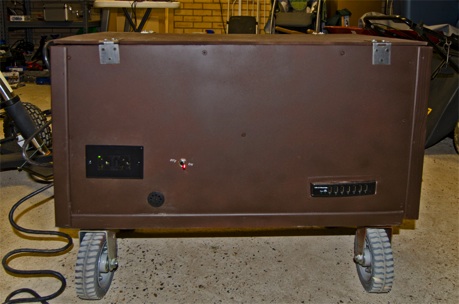 All in all, a relatively simple build once all the wiring plan was created and design was completed beforehand. I now have a long-lasting, durable power box with room to expand if needed although with a 140Ah deep cycle battery at its heart, that should not be necessary anytime soon.

A few things to note from the build:

Based on my tests by taking darks the last few days (while running everything on the scope, dew heaters, and USB hub just to see how the box would do) it seems that I can run this longer than my calculated time, I expect it was due to the dew heaters being on low so not pulling as many amps. I have affectionately named my power box the “AstroPig 140” as I was told several times that people thought it looked like a squat little pig. It’s nice to finally be rid of all the small power tanks that won’t hold a charge and require me to switch power sources multiple times throughout the night. I had fun planning out and building this - if you undertake a similar project I hope you will too!