Head outside this evening and take a look high overhead.  If you live in midnorthern latitudes, you will find a lone beacon cresting near the zenith as the sky darkens.  That's Capella, the Alpha star of the constellation Auriga the Charioteer.  Tracing back to ancient Rome, the name Capella translates as "She-Goat," a reference to the position it holds in the picture of the Charioteer.  He is often portrayed as holding a goat and two kids in his arms. 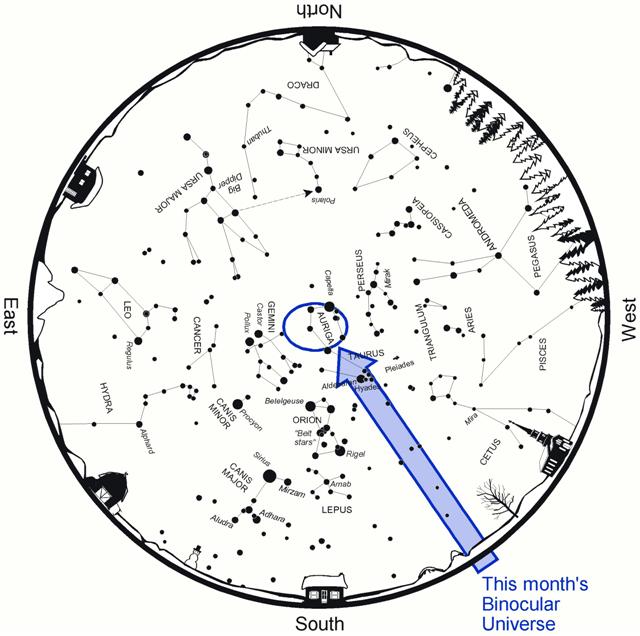 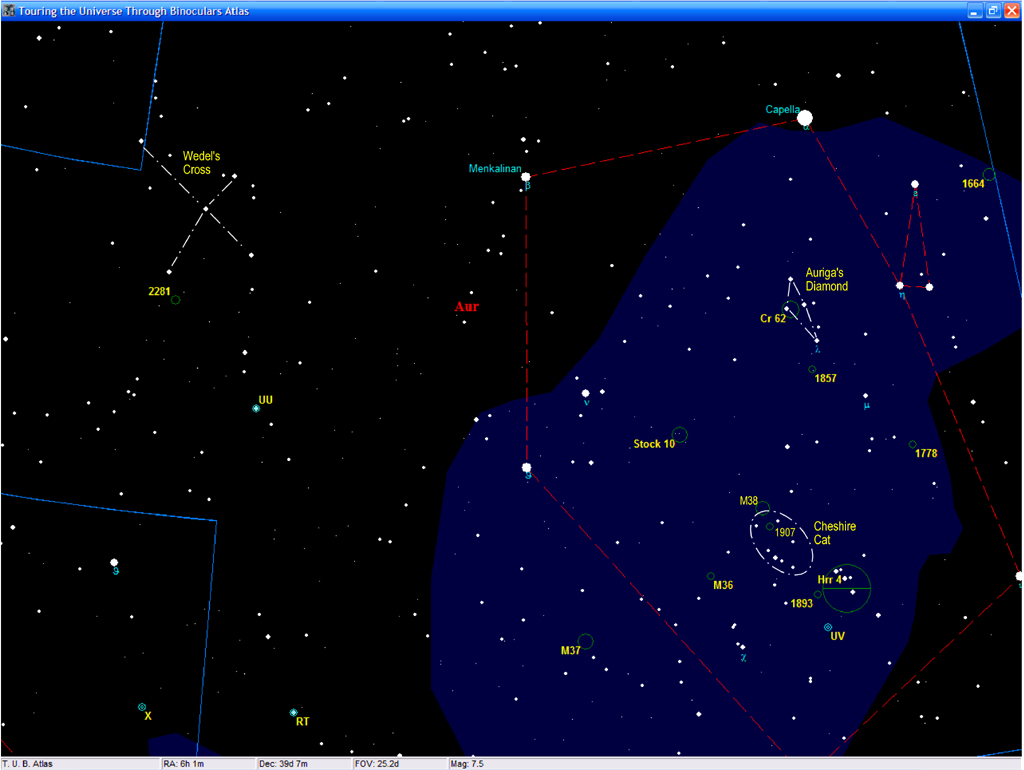 Today, we know that Capella is actually a binary star system lying some 42 light years away.  Each of Capella's suns is classified as a type-G yellow star, like our Sun.  That means that all three have roughly the same surface temperature, although our yellow dwarf Sun is only about one-tenth as large as either of the Capella giants.  There is little hope of spotting the two Capella component stars through even the largest telescopes, since they are only separated by about 60 million miles, less than the distance from the Sun to Venus.

The Charioteer’s pentagonal body highlights a wonderful area of the winter sky to scan with binoculars.  There, you will find three of the season’s brightest open star clusters as well as an array of lesser known targets.

M38, one of Auriga's three Messier open clusters, is centrally positioned within Auriga’s pentagonal body.  Giovanni Batista Hodierna (1597-1660), astronomer at the court of the Duke of Montechiaro on Sicily, discovered it along with M36 and M37 through a 1-inch refractor around the year 1654.  Don't be surprised if you can't see M38 at first glance through your 21st-century binoculars, however.  This cluster can be tough to pick out from among the surrounding stars.

While looking for M38, you'll probably also notice M36, a second fuzzy glow snuggled between two faint field stars about half a binocular field to the east.  M36 is smaller and more condensed than M38, making it easier to spot.  If you have a good eye and fairly large binoculars, you just might also see a few faint stars peering back at you.  Telescopes reveal that the cluster's brightest stars fall into a crooked Y pattern.

The third Messier open cluster in Auriga is M37, found about a binocular field east of M36.  Since its brightest stars shine at only 9th magnitude, M37 is usually seen as a faint, misty patch of light through binoculars.

In addition to the Messier ménage à trois, Auriga contains other enticing open clusters.  One is Stock 10, located about 4° west-northwest of Theta Aurigae and 4° north of M36.  The cluster's three brightest members lie in a small arc of 6th-magnitude stars that’s easy to identify.

Do you ever get the feeling that you're being watched?   You should when you're viewing M38.  Just to the cluster's south, there's a fun grouping of stars -- an asterism -- that collectively look like the smiling face of the Cheshire Cat from Alice in Wonderland.  That's how CN member Ben Cacace from New York, NY, first put it when he bumped into the pattern back in 2002.  He described it as "made up of 8 stars ranging from 5th to 7th magnitude, with 2 stars for the eyes and another 6 in an arc for the mouth."  Depending on when you look toward Auriga, the Cat may be lying on its side or standing upside-down, so use your imagination.

Notice how the Cat appears to be blushing, created by a faint wisp where its right (northern) cheek would be?  That's NGC 1907, a separate open cluster directly adjacent to M38.  Binoculars show only a hint of the cluster, as none of its stars shines brighter than 10th magnitude.  Collectively, they create an 8th-magnitude target that's within reach of my 10x50s on clear, dark nights.

There's another, even brighter asterism of half a dozen stars to the Cat's southwest that can actually be seen with the unaided eye given fairly dark skies.  It’s plotted on the chart above as Harrington 4 (abbreviated Hrr 4), its listing in Touring the Universe through Binoculars.  Some imagine it as a minnow, but to me, it looks more like a lacrosse racket.  Four stars -- 17, 18, 19, and IQ Aurigae -- make up the racket's net, while 14 and 16 Aurigae form the handle.  It must have been some game, since the handle appears bent or even broken in the middle.

Scanning northward back toward Capella, pause at the diamond-shaped asterism formed by the 5th-magnitude stars Lambda and Rho Aurigae, and SAO 40248 and 40290.  Like Capella and our Sun, Lambda is a spectral type-G star, and may show a slightly yellowish tint through binoculars. The other three diamond stars are all hotter, type-A white stars.  Like the Lacrosse Racket, Auriga's Diamond can be seen without any optical aid as a hazy smudge of light.

Some star atlases note that SAO 40290 belongs to a weakly concentrated open star cluster known as Collinder 62. You're hard-pressed, however, to tell the cluster stars apart from those lying either in front or behind.

Finally, let's follow a trail blazed by CN member Mathew Wedel (mwedel) in a post he made to the Deep Sky forum in January 2010.  He suggested by extending a line from Capella through Menkalinan (Beta Aurigae) another 8.5° to the east, you'll come to a prominent cross-shaped asterism of five 5th-magnitude stars.  In his post, he commented "I noticed this for the first time...when I was hunting down NGC 2281 with my 15x70 binoculars. I like the asterism better than the cluster! Well worth seeking out."  Wedel's Cross is centered on the star Psi-5 Aurigae (RA 06h 46.7m, Dec +43° 34.6'), and includes Psi-2, Psi-4, and Psi-7 Aurigae, as well as 16 Lyncis.

As for NGC 2281 itself, my 10x50 binoculars show a nebulous wisp surrounding a tight central knot.  Upping my game to 16x70 binoculars reveals this central knot to be a diamond pattern of four 8th-magnitude suns as well as a smattering of other cluster stars asymmetrically distributed to their southeast.

Here are the statistics for these and other targets in this month's Binocular Universe.

Next month, we’re setting sail southward to survey some of the wonders of Puppis.  Meanwhile, be sure to post your observations and sketches in this article's discussion forum.  And if you have suggestions for future columns, please drop me a line at phil@philharrington.net .

Until March, remember our creed: Two eyes are better than one!