If you look at an old star map of the late winter sky created 250 or more years ago, you'll find a huge, unfamiliar constellation dominating the sky to the south and east of Canis Major. That's Argo Navis, a behemoth of a constellation dating from ancient Greece that depicted the mythical voyage of Jason and the Argonauts as they searched for the Golden Fleece. When viewed from Greece, the stars of Argo Navis appeared to skim the southern horizon, as if the ship was "sailing" across the Mediterranean Sea. 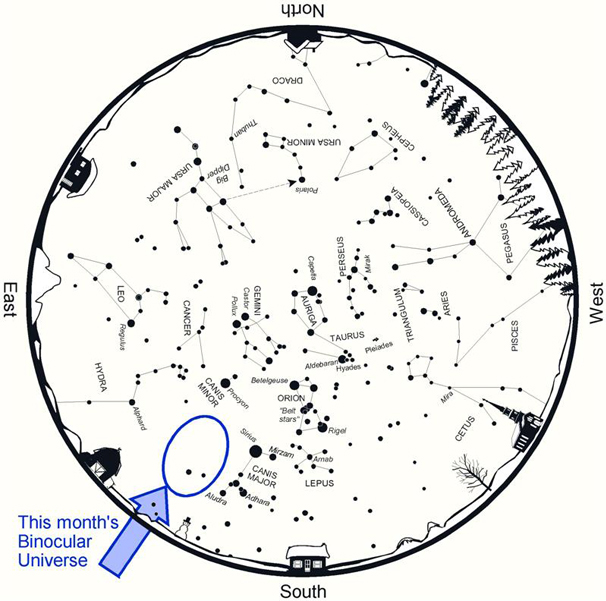 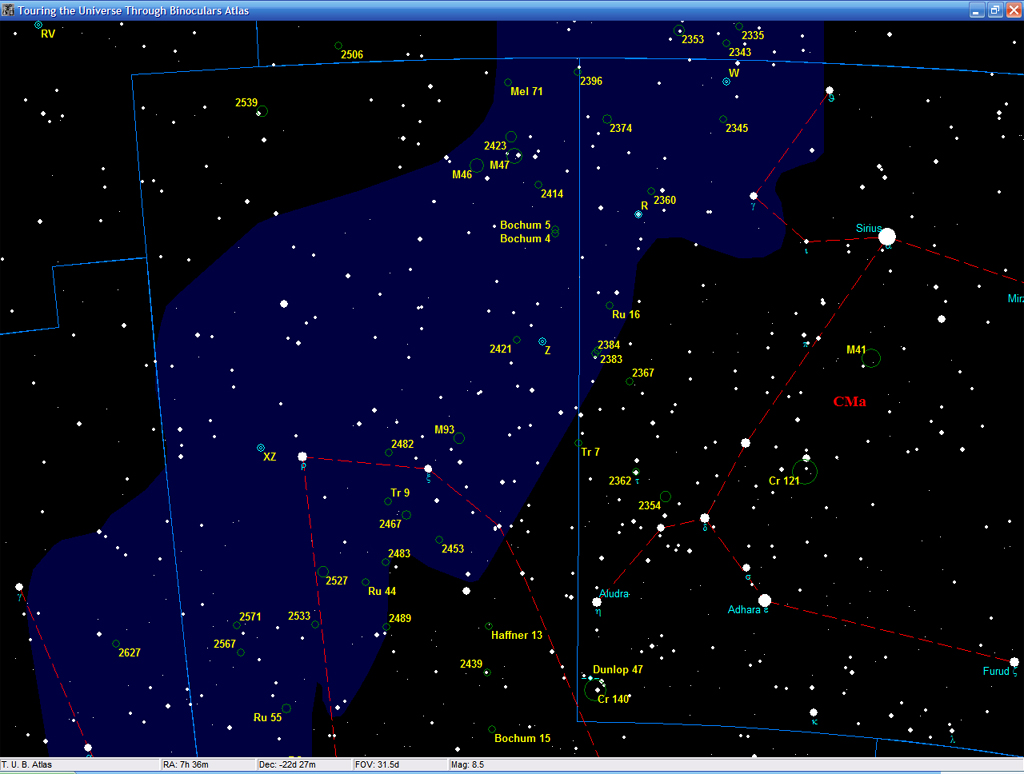 The catalog of the southern sky, Coelum Australe Stelliferum, by French astronomer Abbe Nicolas-Louis de Lacaille (1713-1762), was the first to dissect Argo Navis into more manageable pieces. The ship itself became Puppis, the Stern (or Poop Deck); Vela, the Sails; Carina, the Keel; and Pyxis, the Ship's Compass. Two creatures were also drawn as belonging to Argo Navis: Columba, the Dove, and Volans, the Flying Fish.

For dwellers of the northern hemisphere, Puppis is the most familiar part of Argo Navis. It lies east of Canis Major, in an area notably absent of any bright stars. Although it lacks naked-eye luster, Puppis is rich in deep-sky treasures.

Let's start near its northern border, at a close-set pair of very different looking open clusters. M47 is one the brightest and most appealing clusters in Puppis. Its 30 stellar members range in brightness from 6th to 12th magnitude, with more than half visible in 10x50 binoculars. All shine with the sparkle of blue-white stellar sapphires against a velvet black background. Surrounding M47 is a grand star-filled field highlighted by the striking orange star KQ Puppis to the cluster's west.

M46 lies only 1 degree east of M47. Like M47, M46 was discovered by Charles Messier in February, 1771. M46 is a rich congregation of about 100 stars ranging from magnitude 9 to 13. Smaller binoculars will show only a hazy glow, while giant glasses are capable of achieving partial resolution.

Though invisible in binoculars, a tiny planetary nebula lies on the cluster's northern edge. NGC 2438 glows softly at 11th magnitude and measures 65" of arc across. Once believed to be physically associated, the cluster and nebula have since been shown to be separate entities. M46 is thought to be 5,400 light years away, while NGC 2438 is about 3,000 light years distant.

Another binocular cluster lies isolated in the constellations' northeast corner. NGC 2539 holds about 50 suns, which 50-mm glasses show as an ill-defined blotch of light apparently touching the unrelated 5th-magnitude 19 Puppis. By switching to higher magnification, some of the cluster's true 9th- to 11th-magnitude stars appear throughout the cluster.

Okay, time to drop southward. Scan about a binocular field east of 2nd-magnitude Aludra (Eta Canis Majoris), often portrayed as Canis Major's tail, to find the striking double star Xi Puppis. Third-magnitude Xi is joined by an orangish, 5th-magnitude companion to create a nice color contrast against a star field strewn with crushed blue-white diamond dust. It turns out, however, that this pairing is strictly an illusion. Xi Puppis lies about 1,350 light years from Earth, while its "companion" is only 300 light years away.

If you have a sharp eye, you may also notice the dim glow of M93 looking like a small ball of celestial cotton just northwest of Xi. Discovered by Charles Messier in March 1781, M93 is a dense open cluster of about 80 stars lying about 3,600 light years distant. Although you'll need the aperture and magnifying ability of a telescope to get a good view of the cluster, dark skies and steadily held 50-mm binoculars should show half dozen or so cluster suns mixed throughout a dim glow that, to my eyes, looks triangular. M93 spans some 25 light years edge to edge. Its brightest stars are spectral-type B blue giants estimated to be roughly 100 million years old.

Next, from Xi Puppis, head east about 4 degrees to Rho Puppis, then another 4 degrees south to NGC 2527. Forty suns 9th magnitude and fainter call this open cluster home. Look for a soft glow surrounding eight or nine cluster components, including an 8th-magnitude point lying on the group's eastern edge.

Finally, we have NGC 2571, a collection of about two dozen 9th-magnitude suns lying near the eastern edge of Puppis. The combined light of this open cluster's stars equals 7th magnitude, but individual resolution is reserved for 11x and higher instruments. Look for NGC 2571 within a triangle of 7th magnitude stars.

We've only begun to scratch the surface of Puppis in this brief survey. Take a look at all that awaits you in this region, listed in the table below. That should keep you busy for the entire month! 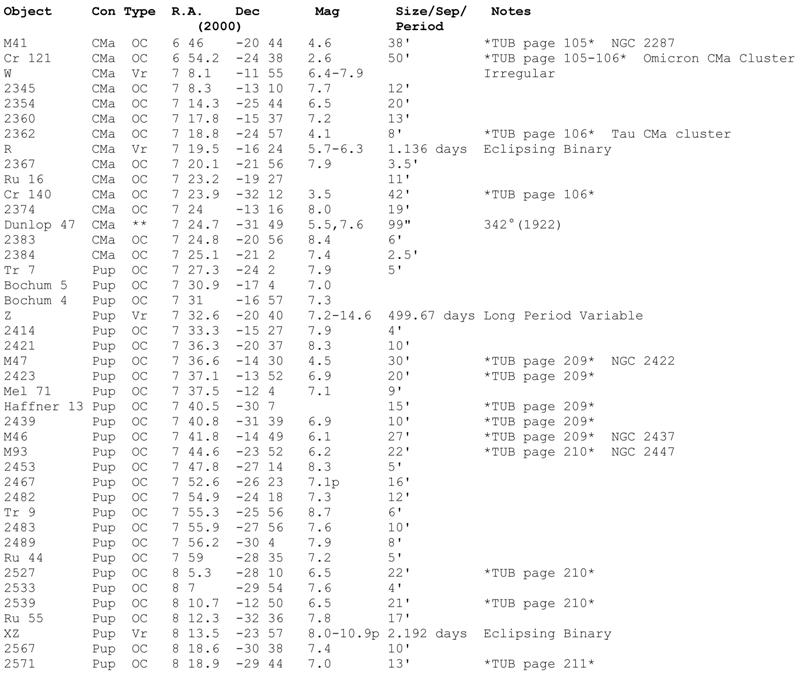 Have a question, a comment, or a suggestion for future columns? I'd love to hear it. Drop me a line at phil@philharrington.net .

Enjoy exploring the southern sky on these March evenings. And until next month, remember that two eyes are better than one.