Closing a Can of Worms: Eliminating Periodic Error

Closing a Can of Worms: Eliminating Periodic Error

Periodic Error (PE) is the systematic error generated by a telescope’s Right Ascension (RA) drive.  The various physical components comprising the clockwork of a RA drive contribute to periodic error. The conventional mechanism to correct this is to record the error and train the electronics to speed up and slow down appropriately.  This approach is called Periodic Error Correction (PEC). While PEC is helpful, it is not a precise solution and can be cumbersome to initiate. There is a more accurate solution.

The PEC approach requires exact synchronization of the physical and electronic components. This can be problematic as things change and get banged around. The correction needs to be recalculated and reapplied intermittently to ensure accuracy.

Astrophotography requires taking long exposures of moving targets. The sky moves 15 arc-seconds per second.  While individual configurations will vary, 1 to 2 arc-seconds per pixel are typical. Tracking variations greater than a few arc-seconds change nice round stars into a sky full of Saturns. PE values may run 10 to 20 or more arc-seconds over each rotation of the RA worm gear. These errors need to be removed.

Auto-guiding can assist with this process but the guiding, imaging, processing, and transmission results in delays of several seconds.  And each correction perturbs the mount which can induce oscillations into the mount.

My dad worked as a flight guidance and control systems engineer for 40 years at Douglas Aircraft and he just despised open control systems.  The alternative is called a Closed Control System. A closed control system allows for corrections to the RA axis in real time. For a telescope, this means that the RA position is actively monitored and adjusted several times a second.

For this analysis, a secondhand 1997 Losmandy G-11 was used. With 360 teeth on the RA worm gear the mount has a period slightly less than 4 minutes. (The “slightly less” is the difference is the between a solar and sidereal day.)  The G-11 is somewhat equivalent to buying a Ford or Chevy. It is not the best mount in the world but it is very functional and works well for visual applications

The controller used for the telescope is the Sidereal Technology Servo Controller (http://www.siderealtechnology.com/). This controller utilizes a feature called Tick Management ™. TM uses a “medium” resolution encoder (320,000 ticks per RA revolution) to measure the position of the axis. This resolution allows the software calculating position on the laptop to receive position updates from the controller reading the encoder several times a second. The software dynamically compensates for the mechanical variations internal to the encoder and provides an active closed loop for the RA axis.  Details on the nature of the TM software can be found in the documentation on the Sidereal Technology website. A requirement of the controller is that Tick Management and Periodic Error Correction are mutually exclusive. You can have one or the other but not both.

PEMPro (http://www.ccdware.com/) performed the analysis of the periodic error, PEMPro communicates with both the mount and camera software.  It images a selected star repeatedly and records movements. The position is calculated and plotted against the RA worm cycle time.

After the RA worm gear has gone through several cycles and PEMPro has gathered a statistically significant sample, the data is analyzed with Fast-Fourier Transform software to pick out the frequency components, and a PEC curve is created to counteract the natural PE in the system.

The calculated PEC curve determines a metric for the RA configuration.

No guiding was done in any configuration in this paper.

Figure 1 shows the data collected to measure the base configuration and Figure 2 shows the completed analysis. The end result is about 24 arc-seconds of PE over one worm cycle. This is a typical value for this class of mount.  Higher end mounts can reduce this value by a factor of 3 to 4 but as the mechanics of the mount are perfected, the cost of the mount goes up.

In this configuration, a Gurley http://www.gpi-encoders.com/ R158 with 320,000 ticks per revolution encoder is added. Sidereal Technology’s Tick Management models the performance of the encoder and adjusts it appropriately. See the Setup Manual on the Sidereal Technology website for details. Figure 3 shows the Gurley encoder mounted on the G-11 mount. The raw data is shown in Figure 4 and the analyzed PEC curve is shown in Figure 5. Adding TM essentially closes the loop on the control of the RA axis.

The encoder is placed directly onto the center of the RA axis. There are no gears or belts. This simplicity increases accuracy, as every additional component induces additional errors. The goal of the encoder is to get the most accurate reading possible. 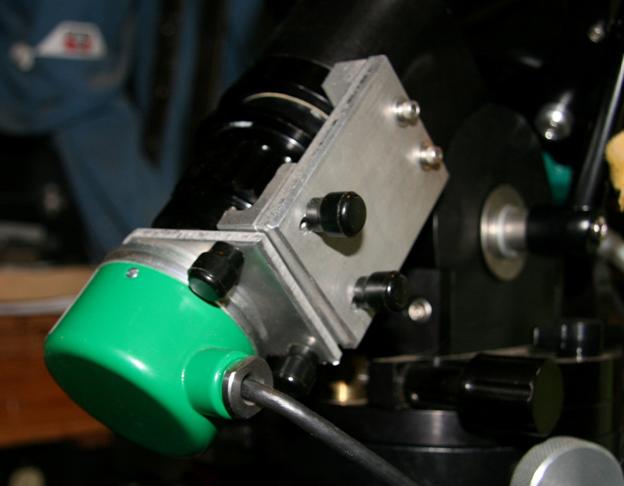 The peak to peak performance of the TM PEC curve is much better (24 vs. 8 arc-seconds), but it has a very nasty characteristic.  The high frequency of the PEC would be very difficult for auto guiding to remove. Because of the inherent delay in auto-guiding, this frequency would likely induce an oscillation into the mount.  (By the time a correction is made on one peak, the correction is likely to be made on the top of the next inverted peak throwing the telescope further off the target and inducing a larger correction.)

In this configuration, the encoder is removed and the original equipment worm gear is replaced with the G-11 NS precision gear from Ovision (http://ovision.com/). The original Losmandy worm has several notorious characteristics that Ovision’s after market replacements correct.  Each individual gear is tested. The test report for my gear showed a peak-to-peak error of about 2 arc-seconds. Figure 6 is a photo of the worm gear installed on the G-11. Figure 7 shows the raw data for this configuration and Figure 8 the analyzed PEC curve.

The results from this configuration show that the Ovision test report is accurate.

Losmandy recently offered a precision gear but the author selected the Ovision for several reasons. Ovision has been making these for about a decade and the reviews I have seen on them are just glowing. Another consideration is that the Losmady gear has an adjustment feature that would likely interfere with the servo motors on this particular mount. On a standard G-11, this would not have been an issue.

I was also steered away from the Losmandy version by a more esoteric reasoning. Losmandy has been making these mounts since the early 1990’s. Yet they have chosen not to improve the RA in spite of well documented deficiencies. The standard Losmandy RA worm gear comes with two blocks holding the bearings. It is very easy for these blocks to become misaligned and induce a PE that is not at a frequency that is a multiple of the period of the worm. This error is referred to in the various blogs as the “76-second error” and it cannot be removed with PEC. The Losmandy precision gear still uses two blocks (whereas the Ovision block is milled from a single block of aluminum).  My belief is that Losmandy should have fixed these problems many years ago.

Figure 6. The Ovision one piece precision worm block installed on the G-11

The Ovision worm gives a very nice result. The size of the curve is small and the frequency is very low. This could be easily removed by auto-guiding.  This result is comparable to mounts costing much more than a Losmandy.

The residual error is about half the size of a pixel of my camera. Further improvement is really beyond what I would expect from the capabilities of this mount.

The combined improvements of Tick Management and Precision RA Gearing have reduced the Periodic Error to significantly less than the pixel size. This result exceeds any that I have seen for a system utilizing a PEC curve loaded into a controller.  A good portion of the scatter in the raw data can be attributed to atmospheric turbulence.  The skies around Bainbridge Island are not the most conducive to astrophotography.

Periodic Error Correction is the most common type of periodic error reduction.  While some improvement is seen with this correction, PEC requires synchronization between electronic and physical components, introduces its own errors, and needs to be repeatedly programmed when things change. By converting an open system to a closed system, Periodic Error can be essentially eliminated.

My dad would approve.