Beautiful Saturn, The Jewel of our Solar System

Between February 16th and March 1, 2008, the NASA Saturn Observation Campaign (SOC) will be working as a group effort to promote Saturn and the NASA Cassini Mission. There will be many Saturn presentations and public viewings available across the nation. Please check http://soc.jpl.nasa.gov/index.cfm for a SOC member near you.

Saturn, the jewel of our solar system, is best known for it’s spectacular rings and multitude of moons. With the exception of Earth, no other planet is so well known in pictures and drawings.

Saturn is the 6th planet from our Sun, and twice as far from the Sun as Jupiter. This distance allows it to only receive about 10% of the sunlight that Earth receives, contributing to its extremely cold surface temperature of minus –285 F. This is amazing considering that the core temperature of this gas planet is over 21,000 F!

Being a gas planet means that it doesn't have a hard surface like Earth. It is mainly made up of hydrogen and helium, but also has a fair amount of methane and ammonia in its atmosphere. Underneath all of this is a solid core thought to be about the size of Earth. What we see while looking through a scope is actually a cloud layer of ammonia ice crystals. These clouds are believed to cause an ammonia-based rain on the planet. Being a gas planet also means that it has a low density. As a matter of fact, Saturn has the lowest density of all the planets in our Solar System, and could actually float in water!

Saturn is the 2nd largest planet in our Solar System. Although it has always been visible to humans, Saturn really wasn't discovered or studied until Galileo observed it through his telescope in the early 1600's. A few short years later, Christian Huygen's spotted its first moon and figured out that the shape of Saturn's rings is not perfectly circular and that there was a gap between them.

Saturn spins, or rotates, quickly. Whereas a day on Earth is 24 hours, a day on Saturn is only a little over 10 hours. It makes up for this for the length of a year though, as it takes about 30 years to make one trip around the Sun. Just like our Solar System, Saturn has a system of it's own known as the Saturian system. This is made up of its rings and moons that are easily seen through even a small telescope. Saturn is home to the second largest moon in our entire Solar System, Titan, which is larger than some of our own planets and has an atmosphere of its own.

So far, there have been 60-recorded moons of Saturn, although some are only 2.5 miles in diameter. Some of its most famous moons are Enceladus, which may have active water volcanoes, Tethys, which has a canyon running ¾ of the way around it and is believed to have once almost split in ½, and Iapetus, which is ½ dark and ½ light because of the dust it collects as it travels around the planet inside of the rings. Some of these moons are believed to aid in keeping the rings in place, and are called ‘shepard' moons.

The rings themselves are made up of water ice and ice covered rocks ranging in size from a grain of sand, to the size of a school bus! The rings are believed to keep rebuilding themselves, and each ring is different. Each ring has a letter assigned to it. From Earth, the A, B, and fainter C ring is visible through a scope, along with the Cassini division that is a gap between the A and B rings. The rings are about 220,000 miles across, and about 100 feet thick.

Going back to Galileo's discovery of the planet, many facts have been found about Saturn and the Saturian system due to space missions. NASA missions Pioneer and Voyager set the way for what is now the most important mission ever to visit Saturn, the Cassini Mission. Launched in October 1997, Cassini has just spent the last 4 years taking pictures and performing scientific experiments while studying Saturn and its system. Cassini set a milestone for NASA by launching Huygen's, the first probe ever to land on another planets moon. Huygen's landed on the moon Titan in 2005 in order to perform experiments, study the atmosphere, and take some breath-taking pictures.

The Cassini mission isn't just about Saturn. Scientists feel that studying this system will offer clues on the history of the evolution of our planets and solar system. Just like the pioneers in our history, these new space explorers will open up new frontiers and aid us in understanding our planet, Earth. 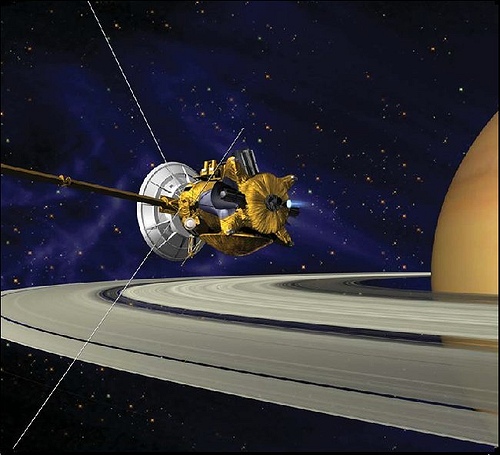