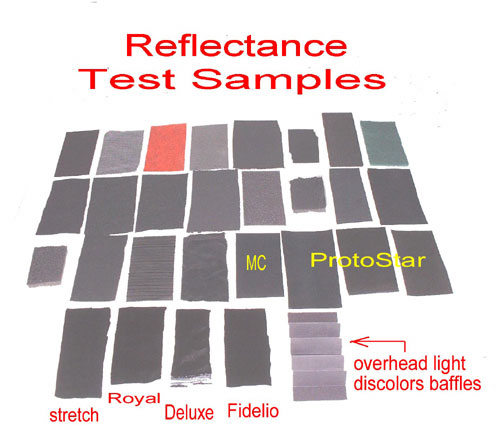 Stray light reflected off inner tube walls in Newtonian & Dobsonian telescopes has been a subject of increasing concern in recent years by Amateur Astronomers. Small portions of this light finds its way to the image plane, where it can significantly diminish resolution and contrast. The degree of image deterioration is directly determined by the degree of reflectance at the inner tube surface. Therefore, in order to achieve the best possible performance, it is critically important to have this reflectance reduced to a possible minimium, particularly in unbaffled tubes.

Current methods to reduce this stray light have been to flock the inside walls either fully or partially with an assundry of various dark fabric based materials, paints, or user designed baffles, to reduce or eliminate this stray light. In the results that follow it has been shown that significant differences in reflectivity exist among various commonly, and not so commonly used materials. 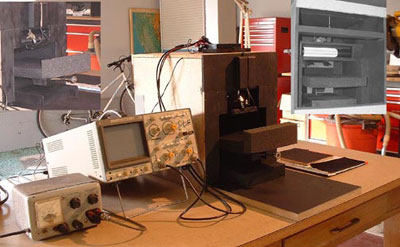 Thirteen members of the Astromart ATM forum participated in an informal relative reflectance test to aid in identifying any materials which could reduce this reflectance more efficiently than the few commercally available flocking sources. Toward those ends, the membership constructed a light box test fixture desgned to project a wide angle source of weak white neon light uniformerly over all samples to be tested.

The test fixture was constructed of common materials in a light tight configuration. Sensing of the reflected light was accomplished with two Radio Shack photosensors. The output of these sensors was measured by a dual trace Oscilloscope. Digital Voltmeters could have been used, but better measuring control and electrical matching of the sensors was most easily done using the channel gain controls of the Oscilloscope. The sensors were at a reasonably shallow angleto the material holding table at apprx. 7 degrees. 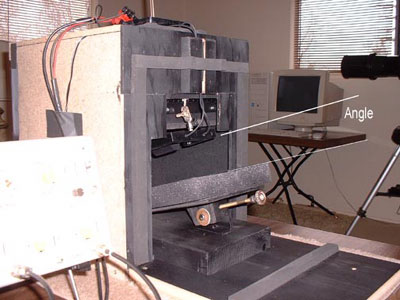 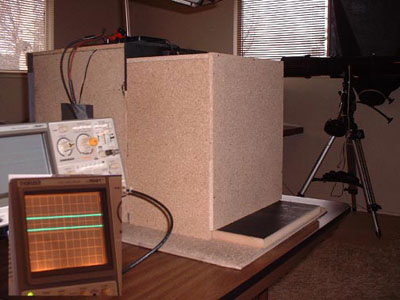 The light reflectance tests were not under strict laboratory conditions of precise angular control nor were the measurements in absolute readings of Lux. No readjustments of any kind occured to the light box or settings of the equipment through the duration of the testing. The tests were conducted carefully but are intended to only show RELATIVE reflectance at a fixed angle of sensor to table.

In the general opinion of this membership, this proceedure has helped narrow down many flocking materials & a few baffle designs, notably Andrew Zaharchuk's triangular baffle which measured exceptionally well in the testing. A sample of stretch velvet found by Floyd Blue initiated a search into fabric retail stores to identify it. That search uncovered a variety of photon eating felts.

In support of the general validity of the test it turns out that two members, Lee Stock and Chuck Fellows had found a particular material (a felt fabric), in Dec. 2000, years before this test, and had been flocking their telescopes with it ever since because of its superior light reduction properties. That fabric was "rediscovered" in the course of fabric store searching and is represented in the test.

The reference material which was used in the testing for instrument control was a sample of McMaster-Carr flocking given by Walt Hamler. This sample was constantly compared to the test samples to control and confirm instrument repeatability. 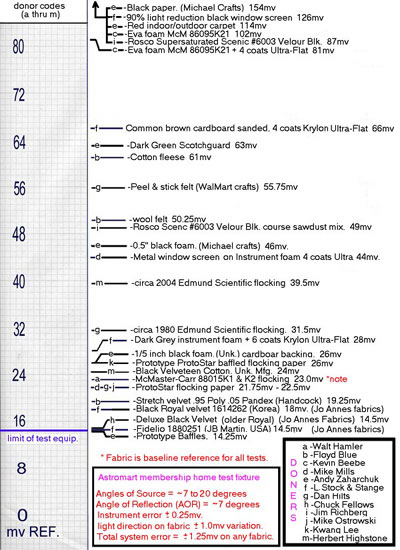 The graph illustrates the wide range of materials tested and were measured under informal conditions without benefit of strict clinical laboratory equipment designed for that purpose. The higher readings on graph correspond to higher reflectivity and represents our findings of their relative merit in light reduction.

Special thanks are tendered to Cloudy Nights Review Staff, for making this information public to the Amateur Astronomer Community for their consideration.

Clear and Dark Sky to all.