Background: A question that frequently comes up on this and several other forums is how the relative sizes and designs of telescopes compare in terms of both deep sky performance and planetary performance. Is a 5" refractor comparable to an 8" SCT? Or a 6" Newtonian? Which is better for binary stars? What about triplets versus doublets? Can a scope with a 30% central obstruction be considered acceptable for planetary observations? Are the owners of large Newtonians right—does “aperture rule?”

Unfortunately, it is not possible to answer all of these questions definitively for all situations. Real-world limitations in predicting a telescope’s actual performance include the following:

Calculated Throughput is the increase in light gathering the telescope provides when compared to a seven millimeter, dark adapted eye. It is based upon the light collecting area of the telescope corrected for transmission, reflectance, and central obstruction.

Effective Aperture is the equivalent “perfect” aperture in millimeters once typical throughput values are accounted for. It is a good representation of how the telescope will perform on high contrast deep sky objects such as globular clusters, binary stars, and open clusters.

Equivalent Aperture for Low Contrast Resolution is the equivalent “perfect” aperture for low contrast features such as planetary observations and galactic structure. It is based on the assumption that the loss in MTF due to diffraction around the central obstruction is directly proportional to the loss of intensity in the Airy disk that results from diffraction around a central obstruction. It is not cumulative with the effective aperture. That is, the effective aperture for low contrast resolution is assumed to be independent of the amount of light scattered and absorbed by the various reflective and refractive surfaces. As long as the telescope is well baffled and darkened this is a reasonable assumption.

Limiting Visual Magnitude is an estimate of how faint a star can be viewed with direct vision on a night of good seeing. Since human eyesight responds logarithmically to changes in intensity, using a scale such as visual magnitude to estimate perceived performance may provide a more accurate assessment than throughput in comparing telescopes. For example, a 30% improvement in throughput appears at first glance to be a very significant margin. However, this is a difference that is barely noticeable at the eyepiece. Using the difference in visual magnitude of 0.3 will provide insight into how much fainter an object will be visible under typical conditions. Many environmental factors such as transparency, sky glow, and altitude of the object will affect the actual limiting visual magnitude—the calculated value can often be exceeded in the real world. These values should be used purely for comparison purposes.

Throughput and Contrast of Many Common Telescopes: The table below provides a comparison of the theoretical performance characteristics of many of the most common telescopes used by amateurs today. 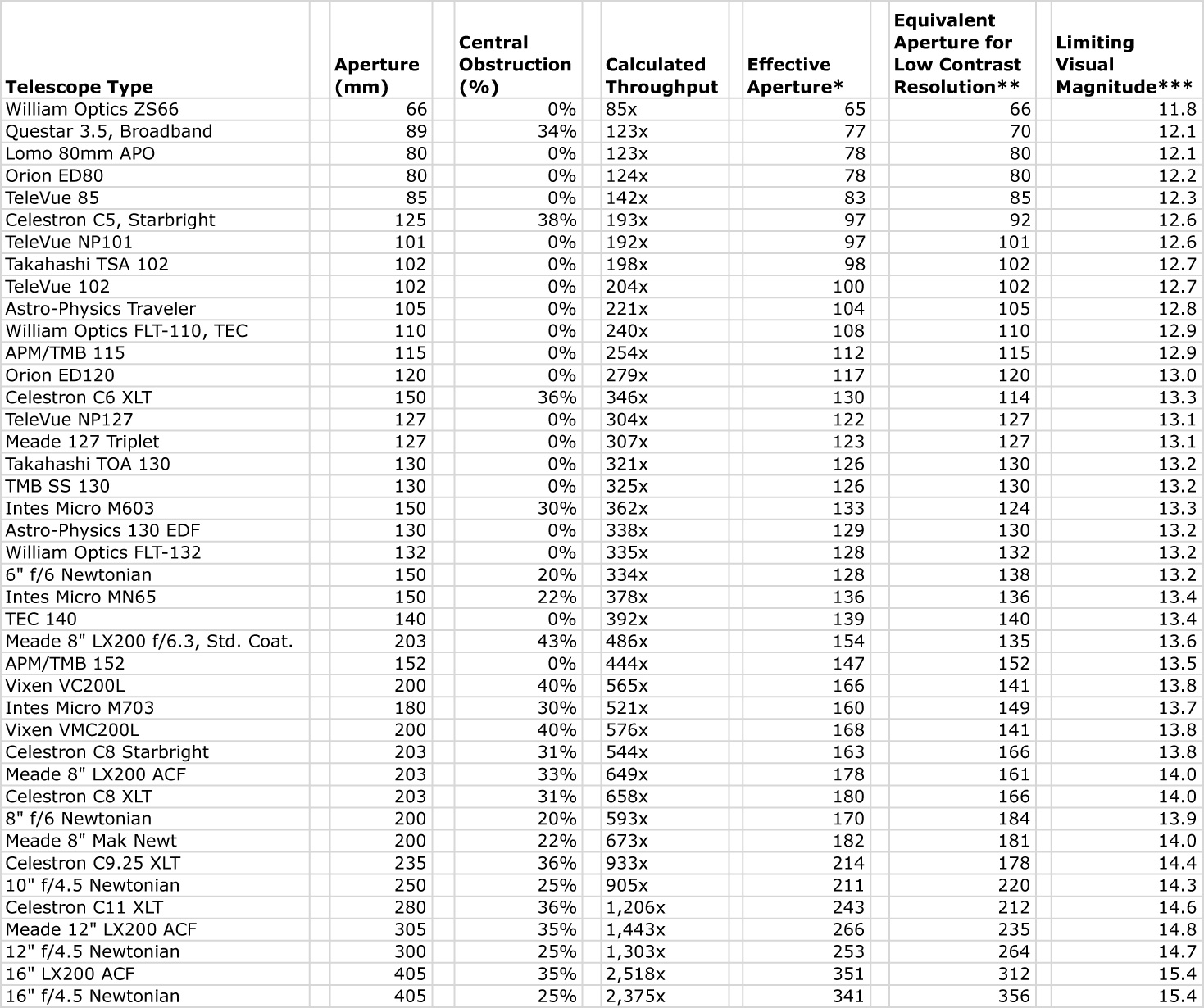 So what is taken into account in this comparison? Quite a bit, actually:

In calculating the loss of contrast (MTF) due to diffraction around a central obstruction, the following formula was used:

The loss of contrast is used to calculate the effective aperture for planetary performance.

While these calculations may not provide conclusive information on how specific samples of telescopes will perform in the real world, it may help to answer questions like, "How much more will I really see if I sell my 80mm and buy a 4" apochromat?"

Conclusion: So, can a 5” apochromat actually outperform the typical 8” SCT in the real world? Perhaps—under certain circumstances. Certainly it should be clear from the table above that the calculated throughput of a 5” refractor is going to be much lower than an 8” SCT, so I wouldn’t expect it to do as well on most deep sky objects no matter what the difference is in optical quality or collimation. However, the numbers for low contrast detail are much closer. In fact, the 8” SCT only has about a 25% advantage over the refractor despite its much greater aperture. This difference could well be overcome by the typically better optical quality, lack of mis-collimation, and faster cooling of the 5” refractor. In practice, it is not unreasonable to think that any given sample of a 5” apochromatic refractor could well out resolve a given sample of an 8” SCT. So I expect the debate between proponents of the various designs will continue.

About the Author: I have been an ardent amateur astronomer for roughly twenty years and am experienced with a wide range of telescope models and types including Newtonians, Schmidt Cassegrains, Maksutov Cassegrains (both Gregorian and Rumak), and refractors. I live in the San Francisco Bay Area where the transparency is generally poor and the seeing is generally above average. For the past two years I have spent more time as an astrophotographer than as a visual observer. I am not affiliated with any manufacturers of astronomy products. I currently use both reflectors and refractors in my pursuits.