I've always dreamed of having a pair of big binocular telescopes since teenage. In 2002-03, I built a pair of asymmetric binocular telescopes with what I believed to be the simplest design, using very simple tools. This design gives essentially the same optical quality for each telescope tube and is very suitable for amateur ATM. Recently I notice a new cloudy nights article by Bill Zmek showing a binocular telescope he intended to build with a design he discovered independently. Since I already built one and used it for a long time, I think I should share some thought so anyone who tries to build binoculars with this design will have the benefit of my experience. 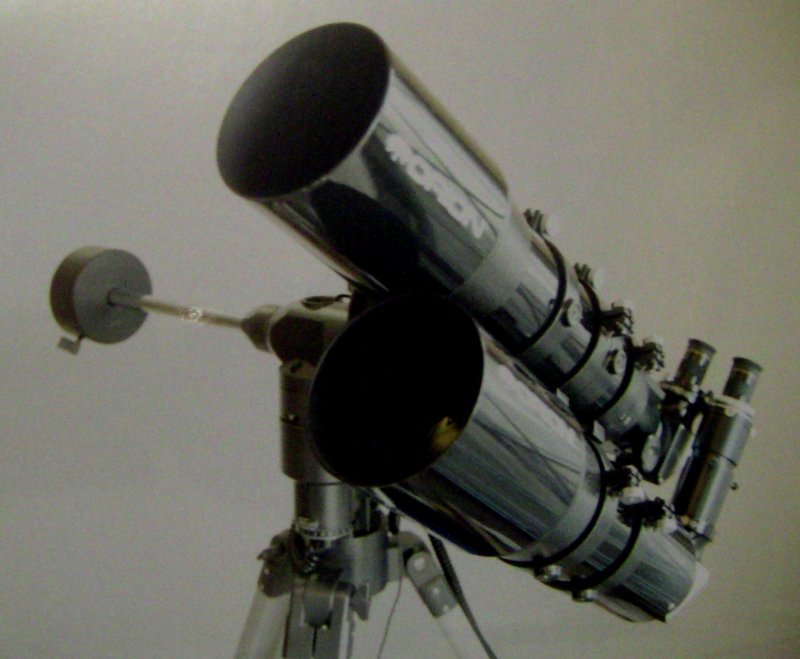 If we are given a pair of 40mm refractors with diagonals, it would take 5 minute to build a simple binoculars. Simply find a piece of wood, drill a few holes and secure the refractors in parallel and we're set. The separation of the two eyepiece's center would have to be the interocular distance of our eyes, which is usually between 5-8 cm.

However, if we're given a pair of larger refractors, say 120mm in diameters, such simple design would not work. The asymmetric binoculars is a design to solve this problem. (Bill Zmek has drawn nice figures and explained the principle clearly, so I would not repeat here.)

When building binoculars with this design, the following details may be helpful:

The refractive binocular telescopes brings a different dimension of enjoyment to star observing due to its great image clarity and contrast. The asymmetric design is probably the easiest to build for ATMs, and in my opinion worthy of all the hard work and resources.