Some notes on Visual Urban Astronomy.

Some notes on Visual Urban Astronomy.

"Every fool knows you can't reach out and touch the stars, but this doesn't keep the wise man from trying." -- Harry Anderson, "Night Court"

A glance at NASA's Earth at Night photo will give you an idea of how badly the "aurora urbanalis" lights up the sky. 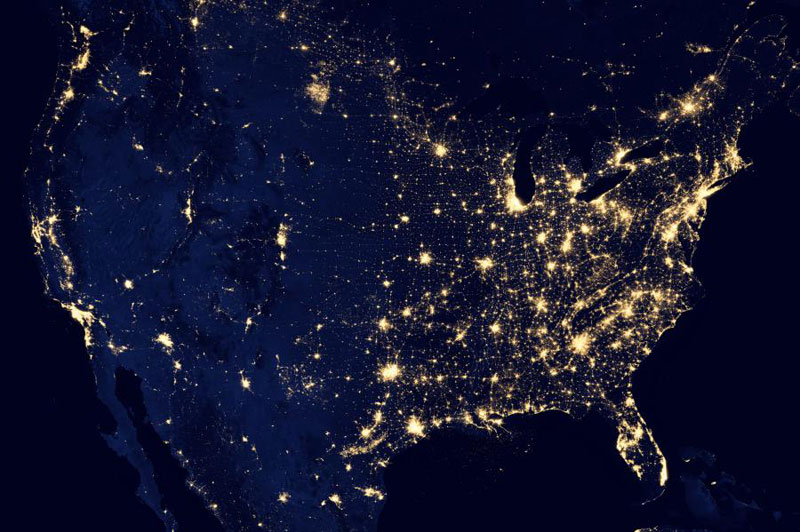 You can get an accurate idea of the light pollution where you live from this site.

From the Little Tycho observatory, in Silver Spring, MD, looking at the zenith, on a clear, moonless night in early June at ~3:00AM, I can just make out Albireo, a 3.2mv star, naked eye. From the Pinnacles, in Shenandoah National Park, with the same conditions, I can see stars of 6.5mv. I've even seen the galaxy M 33 from there, without optical aid.

It is reasonable to assume that with a telescope, I will not have any better luck. My 8" telescope should show stars of 13.5mv in dark skies, according to the classic "New Handbook of the Heavens (1948)" 1 so in my badly light polluted back yard, the faintest stars I can reach should be around 10.5mv, given the three magnitudes of difference between my skies and those at the Pinnacles. 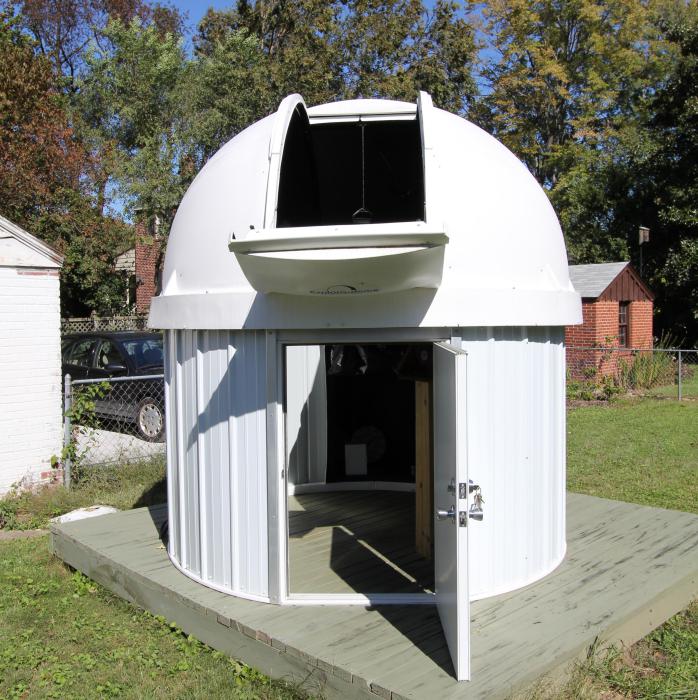 The Little Tycho observatory, located about 5 miles (8 km) north of the White House.

This depressingly reasonable assumption is wrong. I have managed to see stars fainter than 13.5mv with my Ultima C-8 from Little Tycho. How this is done will be described below, but first, a bit about physical optics.

Magnification and the diffraction pattern - OR - how 20x/inch (8x/cm) is very effective at cutting through light pollution. 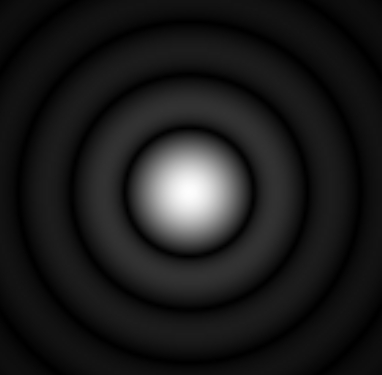 Math warning: You don't have to plow through the equations that justify the 20x/inch (8x/cm) result stated above. If you do, however, you'll know why higher power allow you to see faint stars. Skip the math

The largest stars in the sky, red giants like Betelgeuse, subtend an angle of less that 1/20th of an arc second. To barely begin to resolve the discs of these stars, you'd need a 100" (2.5 meter) or bigger telescope. Most of our scopes don't have a focal length that long, let alone aperture! Other stars are much smaller, on the order of a milliarcsecond or less. What this means is that for all practical purposes, stars can be thought of as point sources of light.

When you look at individual stars through your telescope at high power, however, you do indeed see a tiny disc, surrounded by rings of shimmering light. This is, of course, not the star itself, but the diffraction pattern inherent in the telescope.

The shimmering is caused by the Earth's atmosphere. To a slight extent, the larger the aperture, the more shimmering you manage to catch. This latter effect is rarely a problem, however.

Where L is the wavelength of light, and D is the size of the telescope's objective. For the 8" (20cm) mentioned above, this works out to about 0.7 arc seconds. See the Wikipedia article here for more detail.

More generally, for a telescope to be able to begin to show a star's diffraction pattern, you'll need to use a power of around 20/inch (8/cm) of aperture.

This is an important number, as it's how we manage to darken a light polluted sky.

When we observe with our eyes only, our exit pupil is, of course, just the diameter of the pupil of the eye. All the light that can get in from an extended object (in this case, the sky) is getting in.

The lowest power a telescope can use also has an exit pupil that is the diameter of our dark adapted pupils, about 7mm. This corresponds to a power of 3.5/inch (1.38/cm). When viewed at this power, the night sky looks as bright as it does with the naked eye. When we increase the power to 20/inch (8/cm), the light of the sky is spread out and darkened, but the stars keep appearing as point sources. This attenuation of sky brightness is what makes urban astronomy possible.

How much does this increase in power help? Continuing with our example, we've gone from 3.5x/in to 20x/in, an increase of 5.7x. That square of sky has been streched to 5.7 x 5.7 = 32 times its original area, an its brightness has been attenuated by that amount, which translates to a sky brightness that is 3.8mv per square arc second fainter than it was to the naked eye. The seemingly much too faint stars are visible!3

To realize this threshold there are a few things that you can do during an observing session to maximize your ability to observe faint objects.

I have a broad band light pollution rejection filter. I rarely use it, as it dims the sky quite nicely, and everything else as well. I've found it useful only for a few nebulae, like M1 or M 27. It does not seem to help with stars. In observing sessions at a semi dark sky near my home, I've used a narrow band filter (OIII or UHC) and was impressed at how well it brought out detail in planetaries and M 42. Again for stars, it did not help.

While light pollution hides the stunning vistas of the Milky way, it does not appreciably affect the seeing. I've had Pickering 9 skies over Little Tycho, and have elongated (not "split") 0.5" stars with my C-8. For more on Pickering's seeing scale, click here.

What can be seen 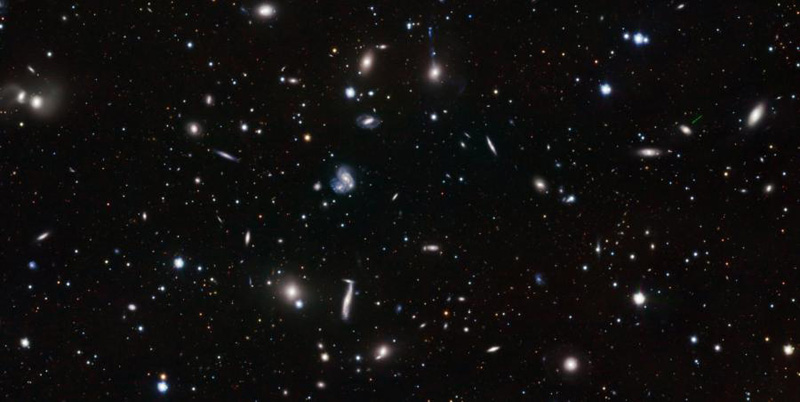 The Hercules cluster of galaxies. You'll need a large telescope (16+ inches, 40+cm) and a very dark sky to see these beauties.

Bad news first. Galaxies, which are NOT point sources like stars, are all but invisible in an urban setting. I have a very difficult time seeing M 110, the companion to M 31, even on a dark night. It's but a very slight brightening of the sky. From a dark sky site, it's obvious without averted vision. A similar story with the distant globular NGC 2419. There are myriad other examples.

Nebulae are almost as bad as galaxies, but many can be seen using suitable filters. M 42, the great nebula in Orion is an exception. It is stunning even on a moonlit, light polluted night. 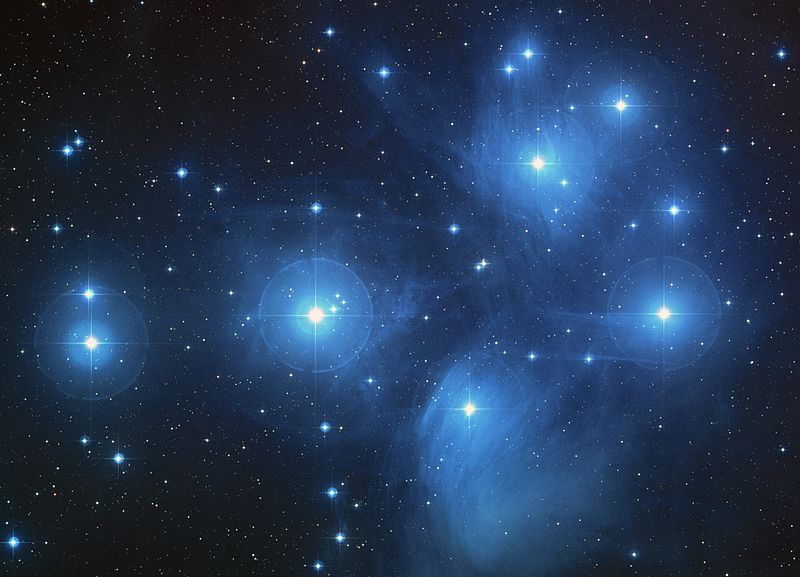 The Pleiades cluster. You'll see all of the stars in this picture, but none of the nebulosity from an urban location.

If the individual stars in a cluster are brighter than your telescope's limit1 you'll be able to make out the cluster, in most cases. The brighter globulars, such as M 13, M 3, M 5, and M 92 are superb sights when near the zenith on a dark night with plenty of power. 50/inch (20/cm) is not too much. Astronomers south of the equator will have even better choices.

Serious work can be done on variables. There is still a need for visual observations of neglected variables. Please see the AAVSO site for more information about an observing program. That said, some variables are stunningly beautiful. I suggest R Lep, R Leo, T Lyr, or V Cyg. These are striking red stars that must be seen to be appreciated. Some variables are interesting for what they are. P Cyg, the "continuous nova", or Cyg X1, the black hole, stretch your mind as you view them. There are plenty of candidates to view here. The General Catalog of Variable Stars currently has 45,825 entries in it, enough for a considerable amount of viewing entertainment! 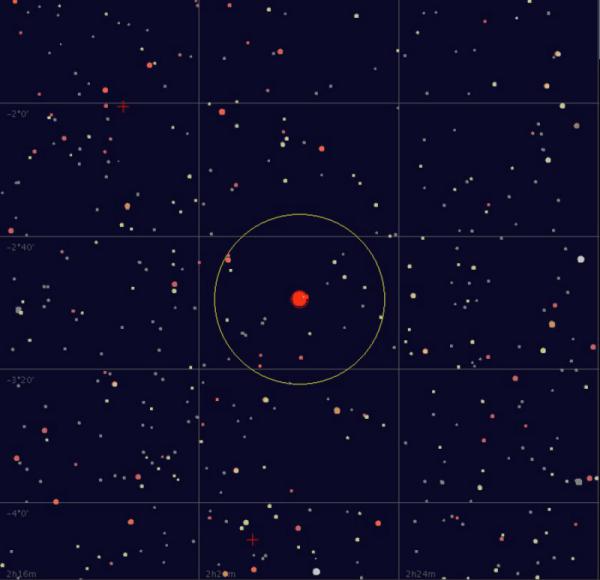 These were the mainstream of 19th and early 20th century amateur astronomy. All but the brightest M objects were out of reach for the typical 2 - 4 inch (5 - 10cm) refractors of the day, and were hardly mentioned in the popular guides. For example, W. T. Olcott's In Starland with a Three Inch Telescope spends most of its non-solar system space singing the praises of double stars. I can only second his endorsement. I too have spent considerable eyepiece time splitting close pairs, trying to see faint ones, and marveling at the many stunning celestial jewels that I've observed over the years. Please feel free to have a glance at my personal log for more details. There are currently 115,000 binaries listed in the Washington Double Star catalog , again, more than enough to keep you busy for a lifetime of celestial tourism. 5

A not-to-scale view of the major members of our solar system.

For many of you, I've saved the best for last. The moon and planets are bright, and even a seriously light polluted sky hardly affects them. As mentioned earlier, urban seeing can sometimes be extremely good. Mars, Jupiter, and Saturn, when high in a winter sky, show a stunning amount of detail in a good scope. On the moon, I've managed to see as many as 3 craterlets in the floor of Plato, and the sunrise over Copernicus is breathtaking. The only planet I've not seen from Little Tycho is Pluto, but I suppose as a dwarf planet, this no longer counts. With very careful viewing, I've managed to glimpse Saturn's moon Enceladus on a number of occasions, when it's at its greatest elongation from the planet.

Finally, trying to contain the mostly useless night time lighting that is a blight to our urban environment is a task worth doing. Contact the IDA for more information.

2) You can test this by taking a tennis ball and standing back 100 meters from it. The tennis ball is now 2 arc minutes in size. You'll be very hard pressed to see any detail on the ball.

3) One might ask if the same attenuation happens in dark skies. It does, but the sky initially is dark enough that the added attenuation does not appreciably darken the background sky, so faint stars don't stand out any more than they did at a lower power.

5) Dr. Corbin points out that when you're splitting a double star, powers of greater than 20x/inch should be used. Indeed, I rarely use less than 30x/inch, and often as high as 40x/inch for this exquisitely demanding task. Tom uses even more (up to 50x/inch) with his C-11.

Many thanks to Tom Corbin, who checked my facts for me, suggested the dark sky site that shows the light pollution for a given location, Pickering scale reference, and added several technique tips.

Thanks as well to Kathie Bryant, who proofread the article and increased its readability.

Despite all of the careful checking that has gone into the article, any errors that remain are my own. Comments are welcome.