A Different Way to Get There

At every turn these days we are seeing the impact of high quality, inexpensive electronics on our hobby. I believe that it could be argued that the application that has had the largest impact in terms of making the hobby accessible to many more people is the development of systems to assist in the finding of astro targets. By eliminating one of the biggest challenges to beginners with these systems, more and more people are enjoying the hobby from their first night out.

While I am not a beginner, after many years of starhopping and chart referencing, and facing what always seems to be limited observing opportunities, the idea of a “point and look” system to maximize the productivity of my nights out was beginning to sound very good.

I began to shop around for a system for my 13” dob. While these systems are less expensive and more feature-packed that ever before, the cost of entry was still around $500, high enough to give me pause.

It was in the course of that process that I came across the concept of using a computer or calculator to provide real time altitude and azimuth bearings, which when applied to simple analog scales on the scope would assist in the search for an object. The idea of the low cost of implementing scales like this certainly was appealing.

As luck would have it, I had recently purchased TheSky Pocket Edition for my long time companion Pocket PC that I refer to as my “auxiliary brain” for calendar, contact and other productivity functions. The ability to provide altitude and azimuth coordinates for a specific time and location is a core functionality of TheSky software. It seemed I already owned the hardware and software to make a system like this work. I decided to give it a try.

First order of business was an azimuth dial. Some web surfing turned up StarTrak, (http://www.startrak.co.uk/) software for the Psion handheld computer to do the Alt /Az calculations. Of particular interest to me on that site were resources they offered for laying out an azimuth and altitude scales. Using their help I made an azimuth dial that is positioned between the rocker box and ground board. It was graduated in one degree increments. 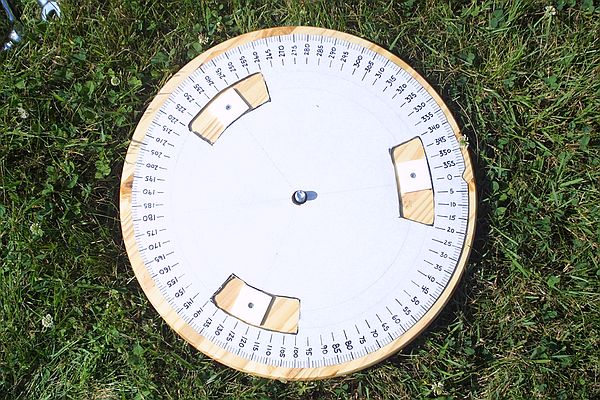 For the altitude scale, they advocated a scale mounted to the altitude bearing of the scope. Sounded easy enough to do, so that is what I did.

First light with this system was a disappointment. I would calibrate the system on a known object, and try to go to another and it was simply not there. It did not seem to be accurate enough to provide the function that I was hoping for. I ended that night a bit disenchanted with the concept.

After a few days of reflection on the situation, a couple of key insights came to me. First, the critical need to level the scope when using a bearing mounted altitude scale like I had implemented. Any deviation from perfect level would introduce errors in the altitude readings, sending me off target.

While I was glad to have a better understanding of the problem, the answer left me wondering what to do next. I observe from varied sites, and it seemed unlikely that a level surface for the scope would be found in all these situations. Two issues needed to be addressed, I needed to have some way to level the scope, and I needed to find a way to make the altitude reading independent of the attitude of the rocker so that the system could tolerate some amount of deviation from perfect level.

Since it was about that time that I decided to rebuild my old Coulter Blue Tube into a more manageable form, I incorporated a set of leveling feet into the ground board of the new design. With them I could adjust to the conditions at the site and assure a level base. 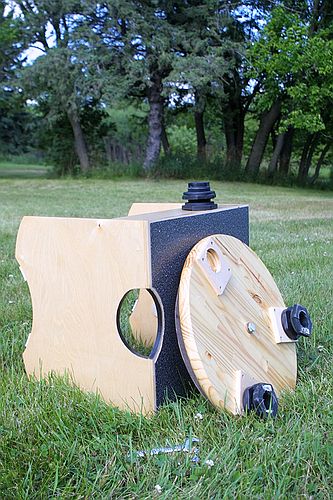 But more importantly, I changed the altitude system from a bearing mounted scale to an inclinometer attached to the tube. The real advantage to this system is that now the altitude of the tube is read independently of the base. The base could be at any angle and the inclinometer would still give an accurate reading of the tube angle. 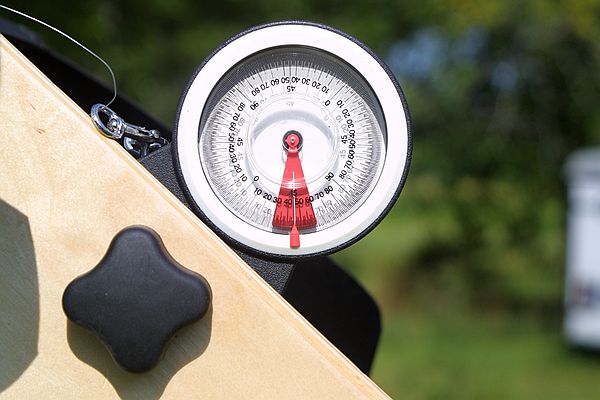 This made a significant difference in the system’s performance. I found that I was regularly able to place objects in the one degree field of my 32mm plossl, and when not found in the field, a small scanning search turned up the target.

While pleased at the improvement, I continued to think about ways to improve the system. I ultimately decided that my hand drawn azimuth scale was not be as accurate as I would like. With the help of Craig, a Cloudy Nights Friend, and an AutoCad file he provided, I replaced it with a computer generated scale. 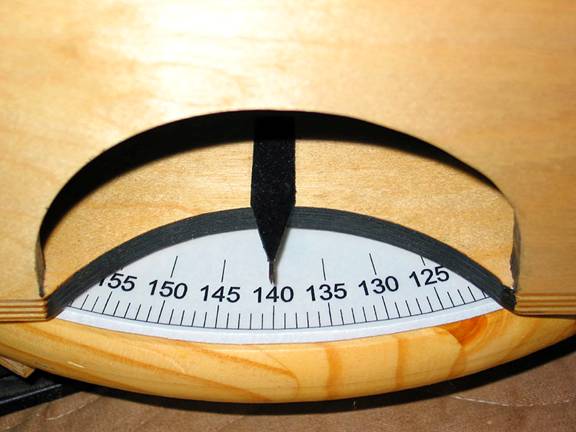 The last opportunity for improvement was in the altitude system. The inclinometer I was using had a relatively small scale, making precise settings difficult, the resolution was barely better than one degree. I was on the lookout for a replacement.

It occurred to me that there just might be a digital version of the analog inclinometer I was using out there somewhere. Sure enough, another web search turned up a product called “SmartTool”. Marketed as a digital level, it had a mode that would provide angle readings in degrees with an accuracy of 1/10th of a degree. That sounded exactly the kind of precision that could make this system deadly!

That was the good news, the bad news is that it cost nearly $90. This brought me to a crossroads. How much money did it make sense to spend on this system? Would this be the improvement that would produce a system that I would feel is really useful? After some thought, I decided that I could buy the unit and try it out. In the event that it worked as I hoped, it still represented a savings over a conventional DSC. In the event it did not, I could probably recoup most of the investment by reselling the unit on the web.

A week later I had the unit in my hands. I made a mounting bracket that would allow me to adjust the angle of the unit to match the altitude of a known object centered in the field of view to the computer’s coordinates. I loaded up the system and headed out for what I hoped would be the answer to the Quest. 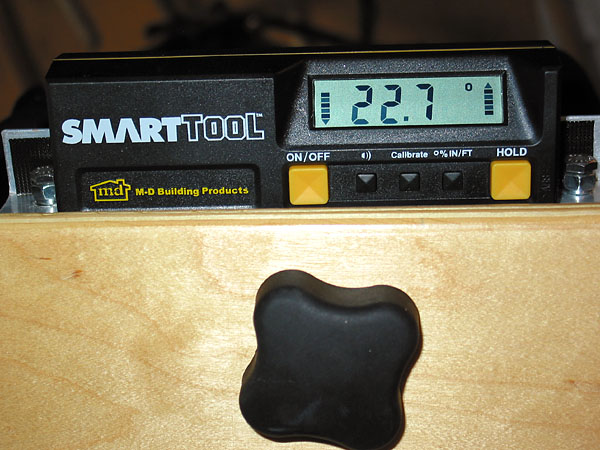 The unit worked brilliantly! Once set, the altitude readings were right on the money all night. At one point I located 15 consecutive objects in the 1 degree field of my 32mm plossl. In the event that I did not turn up the object in the first look, I simply scanned in azimuth ONLY, and it was quickly found. The altitude position was always right on. Eliminating one of the possible axes of error makes recovering from a near miss child’s play.

This was the level of performance that I had been striving for, and one that I can certainly live with. While the manual transfer of the coordinates makes this approach slightly less handy to work with than a traditional DSC system, this approach certainly has its advantages. For your consideration here are a few.

1. Cost. In my case, having already owned the Pocket PC and Software, the incremental cost of the system was quite reasonable. $90 for the level, about $30 for the materials for the azimuth scale, level bracket and leveling feet totals just $120. In the event you needed to buy a PC and software, Used Pocket PC and Palms are available regularly on Ebay for $30 to $100. TheSky Pocket Edition is $49, and similar software for the Palm, Planetarium is $30. Alternately you could certainly use a laptop or even a desktop in an observatory setting.

2. Portability. Using the system on multiple scopes would mean just a minimal investment to outfit them with a azimuth scale and mounting bracket. You simply move the level to the scope you are using that night. To use the computer from a traditional DSC system on a second scope would require the second scope to have encoders installed at a cost of around $100.

3. Full Computer Functionality at the Scope. Contrast the limited, mission specific functionality of a DSC computer to the open ended possibilities of a handheld computer. Using TheSky not only provides the Alt/Az coordinates, but on screen star maps, object information, and other valuable data and functionality. Add other typical Pocket PC functions like voice recording for observing notes, databases and spreadsheets for observing plans or notes, image storage and viewing for comparing your views to deep sky photos etc. You could even have MP3’s of your favorite observing tunes and confirm observational impressions from data on the Web using WiFi from an observing site with coverage! Oh and don’t forget that when the Sun comes up you have a very handy device to organize your life. Your DSC computer will not remind you about your daughter’s volleyball game. 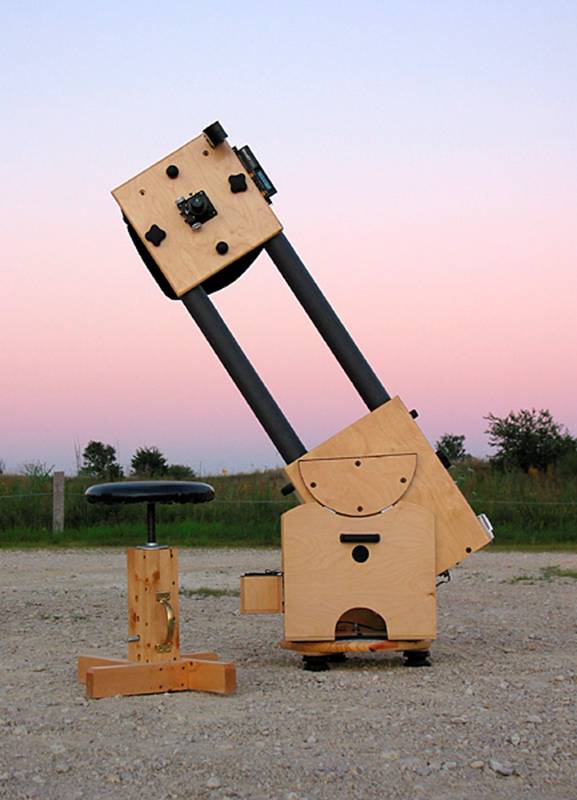 There is no doubt that today’s DSC systems are remarkable and well engineered products. But for those who may be looking for an alternative approach, I believe this system is a good option. I am really pleased with the total package. Using the PocketPC at the scope with this system meets all of the objectives that I had set out to accomplish, a capable system that enhances my observing experience, at a price that makes it easy to justify.