Mak Franken II: The Creation of a Chimera* 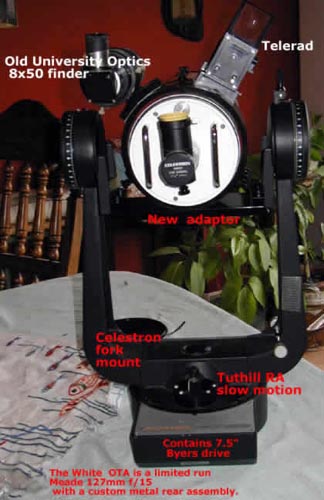 This all started after I unpacked my long dormant Celestron "Super C8 Plus", only to find that its secondary mirror "special" coating had gone bad with the passage of time. I had last used the beastie in the early 1990's. It was purchased in the mid-1980's. I was lucky, the optics had been good, as opposed to many SCT's of that vintage I hear. I had always thought the C8 was too much tube for it anyway, vibration-wise. And, balancing with varied loads... When I was a little kid I was allowed to play with a large scope at a local society's observatory. It had a might-vibrate-if-a-truck hit-the-pier mounting. Guess it kinda prejudiced me at an impressionable age. I decided to us the fork/mount/tripod with another OTA. But with what, and why?

I like fork mounts. Also, the drive on the thing was the result of a collaboration between Celestron and Byers. It was a really good, accurate drive. The gear on it is 7.5". I moved from a absolutely perfect darksky backyard in the early 1990's. Gone the 10" newt, etc.Where I am now has significant light pollution. But, I wanted a driven scope to use in the yard or on the porch. My other mount was an undriven antique gem.

One of my scopes was an ETX 90 RA with very sharp optics. It's mount though was, as is the wont of its kind, well, less than salubrious. So I had the "brainstorm": Get a bar made to fit between the forks, with a 1/4-20 adapter. I can decide what CAT to put on it later, and put the ETX on it for now. Over kill, weird, but hey, I'd be in the dark anyway. So I contacted Ken Dauzat, the custom ring/gizmo maker. He says sure, can do, send me the fork. He just happened to mention that he could make me a really good deal on a 127mm f/15 mak ota...

Ken had some Meade ETX 5" OTAs with white tubes and no backs. He machined metal back for them. I said sure. I have since done some googling/emailing to determine the origin of these things. Meade made about 15, 5" ETX sets for a special order. Evidently a company wanted to link fiber-optic networks in different sky s****ers by laser. The scopes were part of the sending nodes. The company ended up going with a 3.5" special model. Therefore, Meade surplused the 5" ones. I am not going to write extensively about the OTA, since it is not something commonly available. But their will be alittle more later. Back to the mount. 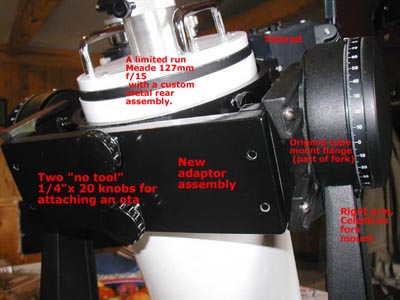 Hopefully the pictures explain the layout. I guess this is the answer to the speculation about what it would be like if Meade had put the an all metal ETX on a sturdy metal mount with a high quality drive.

The OTA actually weighs about as much as the old C8 OTA did. That is due to the metal back and the rather massive ring Ken made that has the holes for the attachment knobs. The big difference though is how stable this is. Balances in all positions. The focuser is 1.25", so that may help. I have used 13mm and 9mm Naglers on it though (the old ones), and balance was still fine. Movement is real smooth. The really bizarre thing though is regarding vibrations. For all practical purposes, none. At 271x, will looking at Mars, I'd occasionally bump the back of the tube with my head. The image would not "vibrate". Rather, it would kinda very quickly shift in the direction away from the bump and immediately snap back. Kind of like a sudden momentary "mirror shift". One night the wind picked up to over 20 mph, and no vibration.

The experience makes you really start to have fantasies. They go something like: "Supposing I win the lottery, (I guess I'd have to play it to do that), and I get an 8" TEC mak and I put it on a modifed Meade goto fork for their 12"...". But thinking alittle more about it, I have started to wonder about something else. Why doesn't somebody market a generic high quality fork mounting that has say, a Losmandy or Vixen compatable dove-tail system. Then you could easily match "under-sized" ota's to it per your desires. I know there are some excellent, small run fork mounts out there, but I mean something portable and costing much less than a used car? One would think it would be good for all those short APO's and medium maks out there.

I viewed and sketched Mars alot with the scope. I also looked at the usual suspects, split some doubles, yada, yada,. In short, the OTA is very good. Optically, it is roughly similar (as far as contrast etc. on planets/Moon), to a four inch refractor, sans any color issues. Actually, it "feels like" a refractor. I guess at F/15 it should. Some nights when seeing was steady, I could see faint stars about a quarter of an eyepiece field out from the disk of Mars. Sky backround is normally black, even if the Moon is up. But planetary images have that "pastel colors" look you get with most CATS, as opposed to the "punch" in an good refractor. It performs like my ETX 90, but on steroids.