When I was 12, a friend brought a telescope catalog to school. It was from Celestron. It was the first time I'd ever heard of a Schmidt-Cassegrain. I borrowed it, kept it for a couple of weeks, read it cover to cover until I had large swaths of it memorized. I was hooked.

I was also broke. I computed that if I saved my allowance for two years I could buy the cheapest model in the catalog. I was 12, for cryin' out loud--my interests changed monthly. Saving up for a few weeks to buy a new dinosaur book was about the limit of my financial stamina.

I returned the catalog to my friend. Pretty soon I was back to catching turtles, reading about dinosaurs or whales or fighter jets, building Lego space cruisers, and listening to Dr. Demento. Life went on.

Astronomy became my dream deferred. I watched every televised shuttle launch that I could, pored over magazine articles on the Voyager flybys and the debut and re-debut of the Hubble space telescope, eventually collected a giant folder of astrophotos for my screensaver, and put APOD at the top of my link list. I even took an astronomy course in high school and saw Jupiter and its moons for the first time through my teacher's telescope. But I never went out stargazing, and I never got my own telescope.

Then in the fall of 2007 I chaperoned some students on a field trip to the Lick Observatory. We all got to look through the Great Refractor, which turns 120 this year. Afterward, I picked up an intro astronomy book in the gift shop. Power keg, match, WHOOMP! A few days later I dug my old Tasco 7x35 binoculars out of the closet, went outside, and found the moons of Jupiter, which I'd not seen with my own eyes for half of my life. A few weeks later I bought my first telescope, an Orion XT6, and I've been observing ever since. 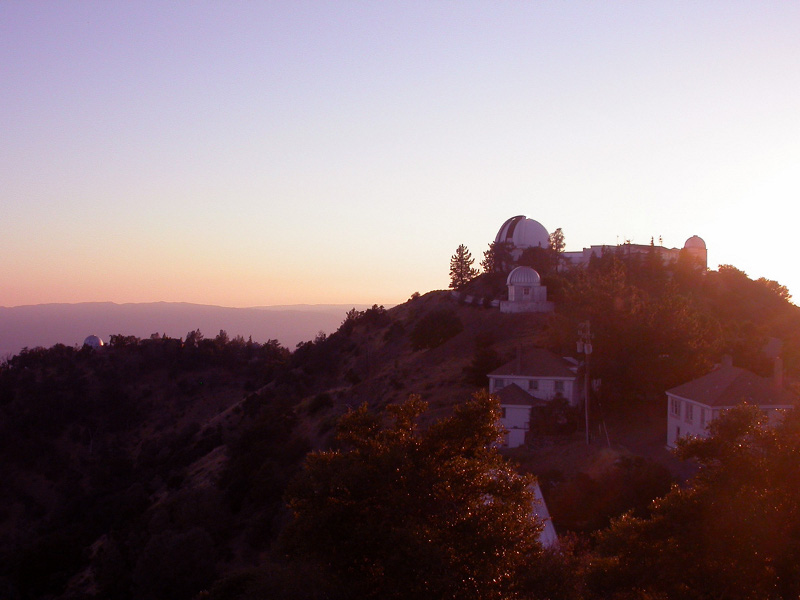 Return to the Lick Observatory

Okay, so the Great Lick Refractor was not actually the first telescope I ever looked through, it was the second. But I think of it as my "first telescope" because it's the one that changed things for me. Before September, 2007, I loved the sky but I thought it was all beyond my reach. Looking through the Lick telescope inspired me to look into amateur astronomy again, and I found that it was more accessible and more affordable than I'd ever dreamed.

The first time I visited the Lick Observatory I didn't know what to expect. I'd never visited an observatory before, never heard of the Lick Observatory before the trip, and certainly didn't expect that I'd get to look through a telescope the size of an ICBM. On that first trip we got to observe M13, the Double Double, and the Cat's Eye Nebula. Everything was beautiful, and it was all a wonderful surprise. 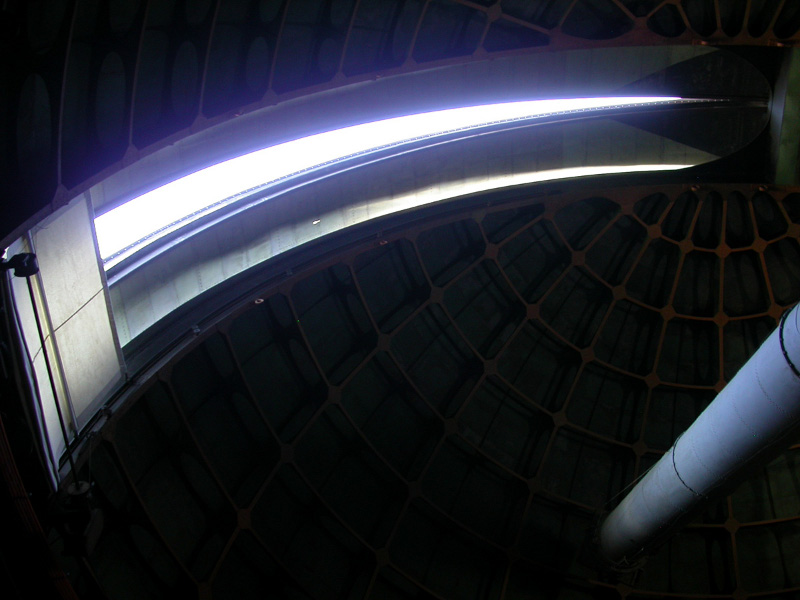 For the second trip, on April 26, 2008, I was ready. In the intervening months I had read Henry C. King's The History of the Telescope, every Sky & Telescope that hit the newstands, Ed Ting's entire site, and more Cloudy Night reviews than is probably healthy. I knew about magnification and field of view, tube currents and chromatic aberration, limiting magnitudes and eyepiece designs. This time was going back with my eyes, ears, nostrils, and pores open--I was going to soak up every quantum of information and experience I could.

How are the views through the 120-year-old, 57-foot-long, 36-inch-diameter Great Lick Refractor? Pretty darned amazing. Contrast and resolved detail are off the charts. If you're curious what they use at the eyepiece end of the big machine, it's a Televue 55mm Plossl sitting in an Orion 2 inch dielectric diagonal. The focal length is 17,370mm so even the 55mm Plossl yields a magnification of 316x at the eyepiece. Unless they've got some monster eyepieces hidden away in storage, that's as low as this baby goes! 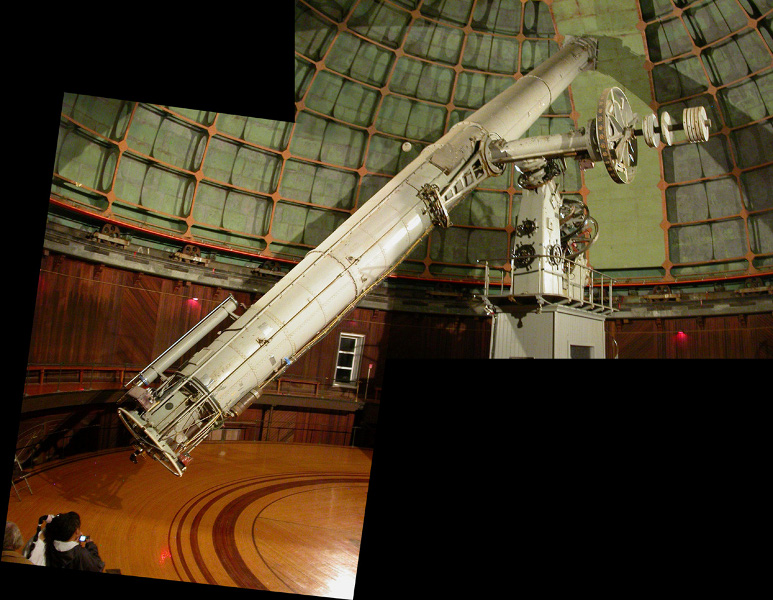 One of the objects we observed on April 26 was NGC 3242, the Ghost of Jupiter nebula. The eyepiece view was better than any photo I have ever seen of that nebula, period. Photos always show it as a couple of mushy rings, like two jellyfish getting amorous on the other side of some frosted glass. Through the Lick refractor it was a pair of crisp concentric clouds with ruffled edges around a pinpoint central star. Absolutely amazing.

M104, the Sombrero Galaxy, stretched all the way across the field of view. It wasn't like looking at it through a telescope, it was like zooming up to it in a spaceship.

But my favorite celestial object that night is also my favorite celestial object of all time, and a preference I seem to share with most amateur astronomers: Saturn. It was spectacular. The astronomer leading our tour let me take a quick snap through the eyepiece with my digital camera, a Nikon Coolpix 4500. The photo doesn't do it justice--I didn't have time to fiddle with the focus or exposure time, and I couldn't hold the camera as steady as I wanted to. Still, I guess the point of digiscoping an immense observatory telescope more than a century old is just being able to say that you've done so. 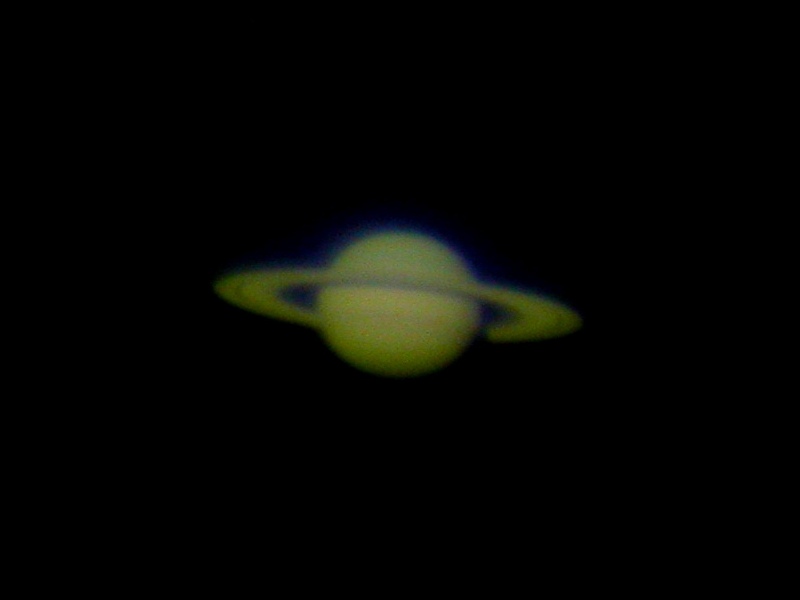 The Saturn photo does show up the Achilles heel of the Lick refractor. Even at f/19, the chromatic aberration is psychedelic. Still, I didn't find it that distracting, because everything else about the views was outstanding. I didn't ask if visitors are allowed to bring their own 2" anti-fringing filters.

I didn't participate in amateur astronomy for two decades because I got two bad ideas fixed in my head when I was 12. Both of them were wrong, and I don't blame the folks at Celestron or their charming catalog for either of them.

The first Bad Idea is that If you want to be an amateur astronomer, first you have to buy a telescope, and the second is that Amateur astronomy is prohibitively expensive. Neither of these is true, although many people do buy telescopes and some of us end up spending improbable amounts on them. But you can get a good start for next to nothing and an average pair of binoculars can keep you busy literally for months seeing things that are invisible or nearly so to the naked eye.

So if you're interested in astronomy, you need not be intimidated. Chances are you already have the most useful piece of gear for the beginner. A few minutes' effort is all you'll need to see if you have a taste for stargazing--and if so, you can equip yourself to do almost everything for a lot less than you think.