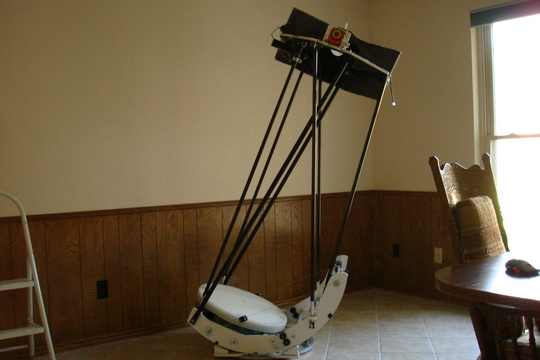 First, I would like to thank Cloudy Nights for offering to post my musings on telescope building on their excellent website. Second, any mistakes or errors included in this article are of my own humble creation. Third, I have no financial stakes in telescope or hardware companies that I am aware of (and much less monetary holdings in all others after our recent financial meltdown).

Every few years I get a hankering to build a new telescope. This is in spite of the fact that at each juncture I have a perfectly good telescope giving excellent views; that my actual craftsmanship abilities and resources are of modest means; and that I get terribly frustrated during the actual building process when things do not work out as I have planned. I enjoy observing. I enjoy tagging along with other amateur astronomers who are obsessing about their observing lists. On the other hand, I suffer from periodic episodes of telescope building fits.

My 12.5” dobsonian described in my October 2004 article on this site was an excellent scope that gave many people wonderful views through public outreach. I will always remember some of those views--like of Mars during its record setting close opposition, of the Whirlpool galaxy on an exceptionally dark and transparent night, and of a very wonderful triple star in Cassiopeia on a steady evening.

The Next Larger Telescope:

But at some point, I started to desire a larger scope--one that was easier to transport and lighter in weight. I started to obsess about design ideas. I started doodling mirror mounting configurations and truss designs. Eventually I did build the next dob, a 14.5" wonder that had a stupendous quartz mirror crafted by a skilled optician. The scope had a total weight of about 35 pounds. I used carbon fiber paneling for the mirror mount and the upper ring along with carbon fiber tubing for the truss poles. It had tensioned strings for added truss support. The scope was a breeze to deploy for public observing. It was also a conversation magnet given its unusual appearance. The scope's only flaw was one of its best assets—being so light in weight; it was also quite sensitive to wind conditions.

Time went by. I observed. I forgot about the frustrations that went along with constructing a telescope. On one lazy 2007 summer public observing night, a club member with extensive observing experience was expounding on the observing merits of going from a 14" scope to a 20" scope. The only 18" and larger scopes I had been acquainted with were extensive operations requiring SUVs or vans to transport and ladders to observe with. I wondered, could I build a scope that large and still get it in my new hatchback?

A few design criteria seemed paramount. Keep it simple since my skills at building were simple. The mirror needed to be as light as possible and as easy to support as possible. Keep it as short as possible—no tall ladders for me to transport let alone fall off of. Keep the scope as small as possible for transport.

In Search of A Leading Man (Mirror Actually):

I started searching for a mirror. Weight considerations pointed towards a thin mirror, but I had reservations. My 14" mirror required a complex cell that I did not want to repeat on a 20" scale. But a full thickness mirror would be so very heavy. In my searching, I came across a Canadian telescope builder, Normand Fullum, who was offering a line of fused glass sandwich mirrors that seemed really intriguing. His design offered rigidity (a 1 to 6 thickness ratio), weight savings (around 38 pounds), quick thermal equilibrium, and an unusual appearance. In addition, Mr. Fullum was willing to figure a mirror to an insanely fast f-ratio of less than 4. After doing some more research, I put down a deposit and hoped for the best. 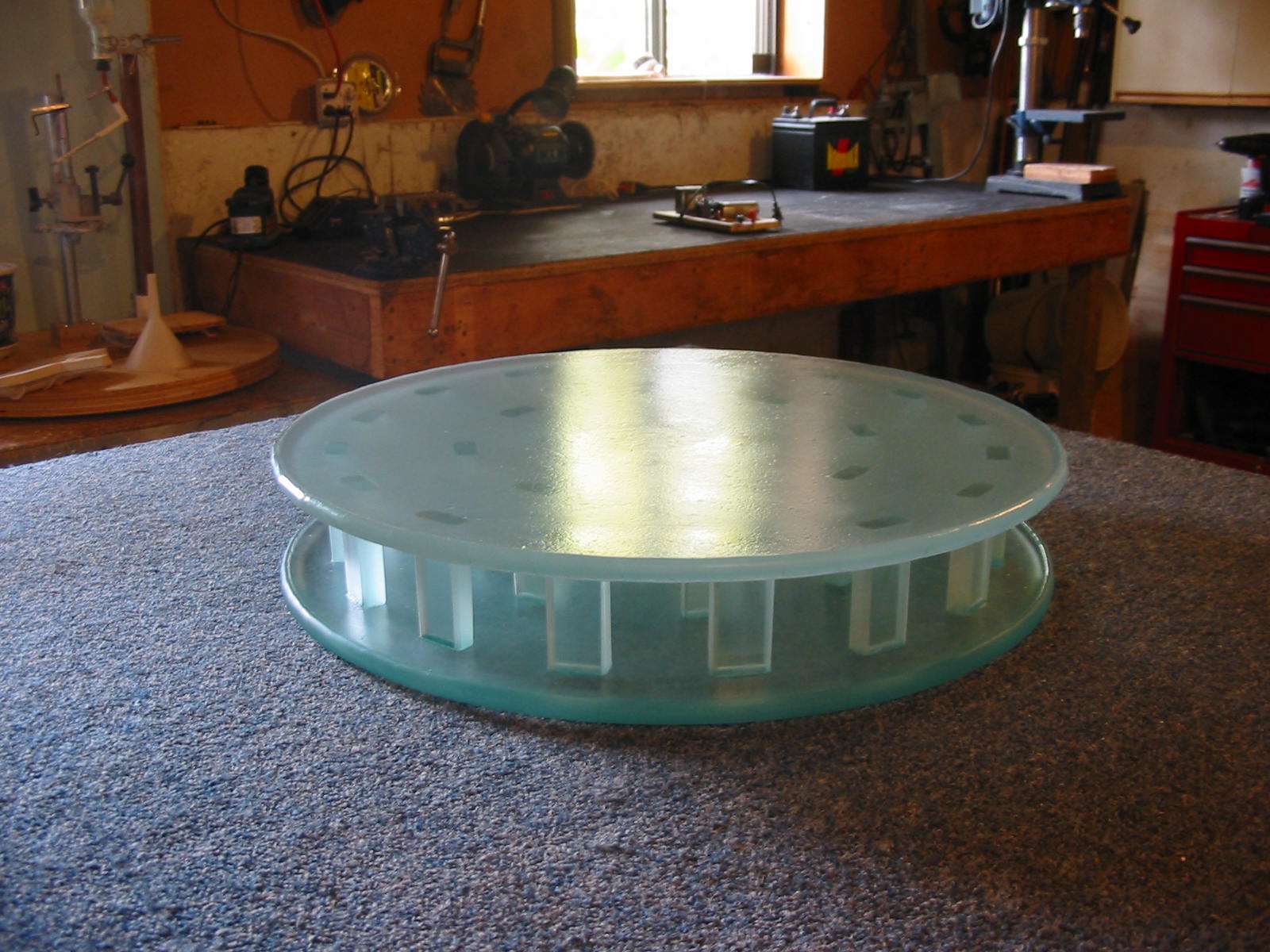 After ordering the mirror, I mulled over my basic design options in more detail. This is in my opinion the most enjoyable part--imagining and drawing possibilities. In the end, I returned to my first scope design--large altitude bearings with an ultra low ground ring. I hoped to use a commercial 23.5" aluminum lazy susan as the ground ring as I had done for the 14" scope with okay results. As for the mirror mount, I desired to build a simple frame that would tie the primary mirror and altitude bearings together. For that main frame, I looked for square carbon fiber tubing tied together with a gusset system but to no avail. Later after my scope was completed, one website started to offer such products. 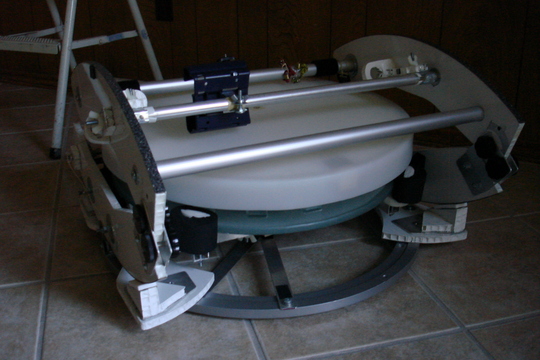 In the end, I decided on aluminum tubing welded together for the main frame. I had learned a few lessons from previous building frustrations; I would leave skilled tasks to the skilled. Like welding the frame together. In a drive for the lowest profile, the simplest design, and the lightest structure, I decided to mount each of the six mirror support triangles directly to the frame with simple bolts and springs. Each triangle had enough “play" to rock in all directions. I would tie the triangles into position by using sturdy ½" plastic adhesive strips. Given the relatively thick mirror, I believed that this approach would provide sufficient support. Of course, collimation would involve adjusting triangles in tandem which one club member said would be a “nightmare." I believed otherwise. 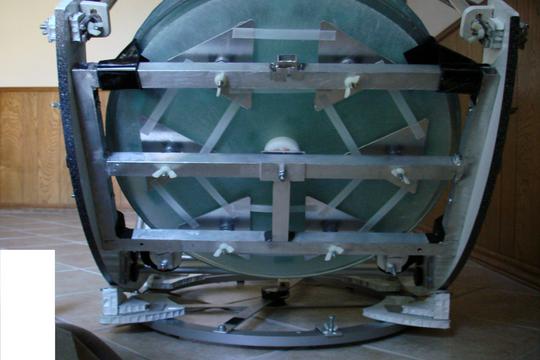 By the mirror's nature, a sling system was out of the question. Besides, I have never used one in all the scopes I have built. Since the mirror's bottom plate would have a center hole suitable for lateral support, a center post could be used—a delrin rod shaped to the correct diameter to allow for some play during collimation. However, being cautious, I planned to add a set of front supports too. I would also employ velcro tie downs when the mirror was not being collimated.

What would I use for the altitude bearings and the upper ring? I looked into various paneling options before settling on ½" aluminum honeycomb paneling from McMaster-Carr. While not as strong or as light as carbon fiber, aluminum honeycomb paneling is fairly rigid, not bad on weight, doesn't require extensive priming and painting, and is easy to cut. A generous local club member with a well-equipped woodworking shop offered to assist me in cutting the bearings. That saved me hours of hardship trying to create a nice curve using my minimal toolset. Each bearing was cut into two pieces fitted with gussets allowing the bearings to fold back on themselves for transport.

I cut the upper ring, and other parts myself using my jigsaw, shaky saw horse, and somewhat steady hand. I did go back to carbon fiber paneling for the secondary vanes. I also used an epoxy I had used on the 14" scope with good results, PC 7, to mount the secondary vanes to the upper ring and to the secondary mirror holder. I again tweaked design convention, by using three vanes positioned perpendicular to each other rather than at uniform degrees apart. I much prefer four spikes while viewing over six. 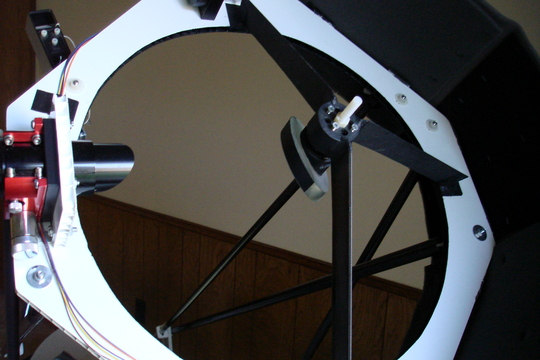 Trusses were a pain as usual and ended up taking the most time to tackle. I initially wanted a six-truss system (with carbon fiber tubing) directly tied to the aluminum frame. However, once everything started to take shape, there simply was not enough room for directly mounting the trusses to the main frame. Thus they migrated out to the bearings despite my fears of flexure. I experimented with commercial ball & socket truss connectors, but in my retentive way I decided that the trusses would bolt directly onto the bearings with as little ambiguity as possible. All seemed well; at least before the mirror arrived. 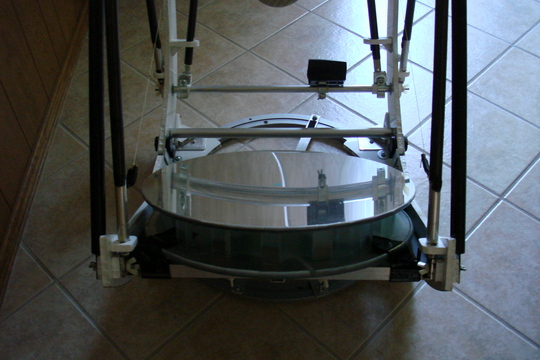 The mirror arrived ahead of schedule with an astonishing focal ratio of 3.75, or 2005mm focal length—one fast optic. And was it an unusual sight! Definitely a conversation starter. Things seemed good. The mirror went onto the mirror mount with few problems. Of course, I had overestimated the truss lengths, but I had designed them to be easy to shorten so shortened they were. The first overhead views were very promising. However, two old enemies reared their heads—flexure and balance. 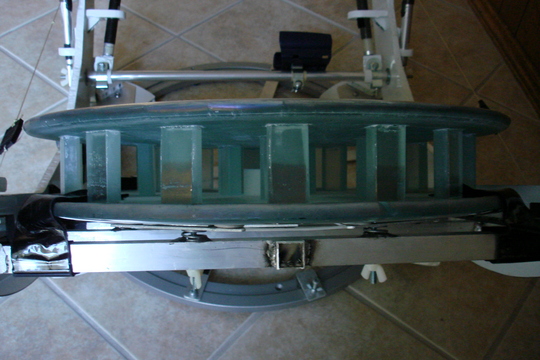 I have fought flexure several times before—usually doing well enough. I'm sure a skilled engineer would find my struggles quaint with their powers to calculate moment loads and such. For me it tends to be a trial by error. And I did have flexure. Not as bad as in past scopes, but given the fast nature of the optics, I needed less. I debated several options, but in the end I did the simple thing and added two more truss poles—eight total. It looks a bit strange, but it solved the flexure issue. 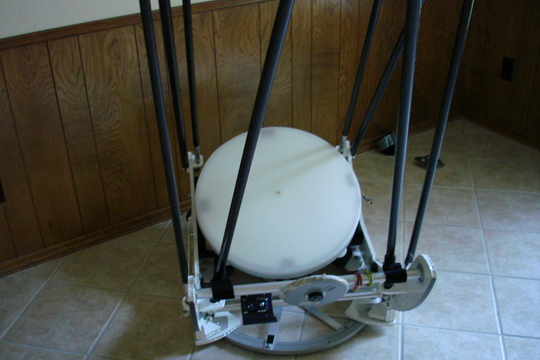 Balance was less threatening but ever present. The scope was bottom heavy. If you have to have a problem, being bottom heavy is far better than being top heavy. To compensate until a better way was found, I decided to use attachable weights—one on the front of the rocker assembly for mid-altitude viewing and a smaller one on the upper ring for near-horizon viewing.

I also wanted to use an Argo Navis with the scope, so I faced the challenge of how to attach encoders. Both the azimuth and altitude had no physical center attachment point. For the azimuth, I used two aluminum strips to span the diameter of the lazy susan to create an actual center point. However, I did not want to do a similar approach with the altitude encoder. I prowled various websites for a possible alternative. I eventually found an amateur who had successfully used an inclinometer to replace the altitude encoder on his dob. Why not try it, so I attached an inclinometer to the upper ring.

The Results—the great, the good, and what could be improved:

The views have turned out to be wonderful. The mirror is great! Fossilized light looks much brighter in a 20" scope. In addition, I have a fairly large aperture without having to climb up more than one step to view at zenith. In the conversation department, the scope received a fair number of favorable comments at Rocky Mountain Star Stare this summer.

The altitude bearings fold allowing for transport of the rocker assembly in the back of my car. Collimation for me is no big deal—when I tighten a triangle on the mirror mount I loosen an opposing triangle or vice versa. Wind stability is much better than in my old 14" scope due to the additional weight. The rocker assembly with mirror weighs in at around 55 pounds, the trusses weigh in at about 5 pounds, the upper ring at about 5 pounds, and the ground ring at about 10 pounds. The Argo works fine—the inclinometer does its duty. 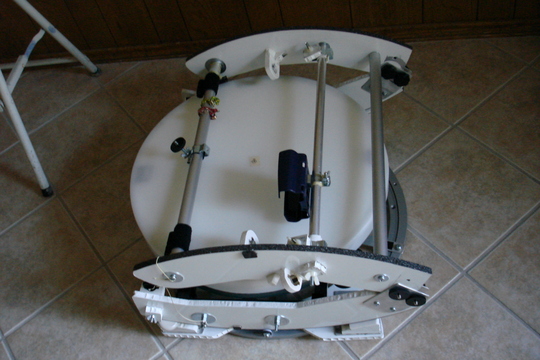 Improvements? I could use a bag to hold the trusses for transport rather than tying them together with bungee cords. The upper ring does not sit happily on the rocker assembly for transport—that would have been nice. Balance could be more seamless—counterweights are never fun. The lazy susan can occasionally get balky and needs occasional cleaning. And in a more perfect world, it would be nice to have the scope weigh less. But then, it is a 20" scope with wonderful optics that fits into my car.

Now if I had more time to observe.