Observing on a "Cloudy Night?"

In my first article about Weather and Astronomy last month, I reviewed how turbulent skies can make an otherwise enjoyable clear night not so enjoyable. I reviewed how the best conditions usually can be found under broad high pressure systems which can be detected on weathermaps in the Weather for Astronomers resources section of www.WeatherMan.com In future articles, I will explain how to use the infamous Clear Sky Clock, and explain its digital nature, which limits its usefulness to some degree. I will also go over how to match your intended observing targets to the weather for the night, and review the Jet Stream and how it is a big culprit in making for difficult “seeing” conditions. In this installment, however, I have been inspired by a dazzling satellite photograph, to show you how you can actually observe bright objects on somewhat “Cloudy Nights”, no pun intended, if conditions are right. You read that correctly: You can actually observe the moon and planets, and even occasionally bright nebula, when it is cloudy outside if the clouds are thin enough. 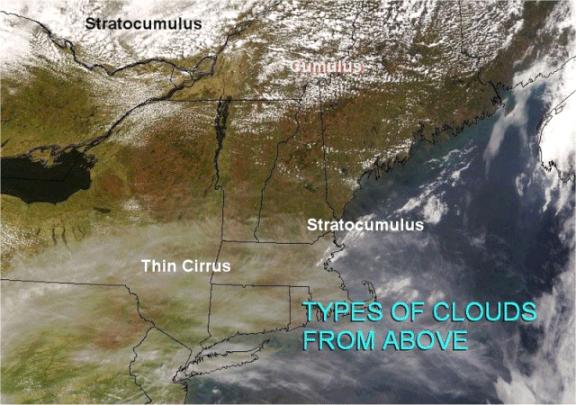 The incredible satellite photograph above was taken by the more unusual Polar Orbiting Satellite, but it illustrates the cloud types the best, and how clouds can be “translucent”, that is, you can see down to the Earth from space, and you can see space right through them looking up! Cirrus clouds and Cirrostratus clouds made of tiny ice crystals fall into that category. While the Polar Orbiting Satellite photos can be found on the Weather for Astronomer’s resource section on www.WeatherMan.com , it is not available all day. However, every moment of every day, the Earth is photographed by geo-stationary satellites. These satellite photographs include both visible shots by day (as the clouds would look to the naked eye from space), and infrared satellite photographs at night (detecting cloud temperatures). The kind of pictures you see on television are usually NOT the visible satellite shots because they depend on the sunlight, and lack continuity. However, the visible shots are the most instructive for you to determine what kind of night you are facing. You see, since the infrared satellite photographs show brighter whites for higher clouds, (since they are colder) it sometimes gives the false impression that the cloudiness is thicker than it actually is, showing high thin clouds as a cloud cover that looks rather thick, and unable to observe through. In reality, the high thin clouds are somewhat translucent, and bright objects like planets can be seen right through them. In fact, it is possible to observe a somewhat blurry, but very real image of Jupiter’s belts, or Saturn’s rings right through a high deck of clouds, EVEN IF YOU CANNOT SEE THE PLANET VISUALLY with no optical aid!

The two satellite photographs above are a same-time comparison of the clouds at around 1800 GMT on Sunday May 28th, 2006. The image left is an infrared satellite photograph off the link provided at www.Weatherman.Com . The image on the right is a visible satellite shot at the same time. If you were living northern or central New York State, you would think it was a cloudy, overcast day from the image left. Not so, a thin veil of clouds high above is easily detected on the visible shot to the right. If you luck out, you may be able to catch a Polar Orbiting Satellite shot around the same time as well, although they are infrequent compared to these which refresh every 15 minutes or so.

Now, imagine this: You setup and align your observatory scope or your “go-to” telescope during the day when skies are clear, or even on a previous night. Then, armed with the latest visible satellite images late in the afternoon you bring someone over to observe who thinks you are nuts for even trying on a “Cloudy Night”. Ah, but YOU know, those are high thin cirrus clouds, and in fact, at times, you may even be able to pick out your planet without optical aid. If you really luck out though, it will be “just cloudy enough” to be absolutely invisible without the scope, and yet totally visible with the scope peering through the high clouds, now that will impress friends and family! You can also do this through lower clouds, such as cumulus and stratus, but with less consistent results. Those clouds often come and go, and it is more of a waiting game. It is the high thin cirrus, or cirrostratus clouds that makes for less than perfect images, but still allow you to have at least a marginal view on an otherwise cloudy night.

If you would like more tips and tricks on astronomy including my thoughts on optics and the best “bang for the buck” you can now subscribe to my “Common Sense Observer” newsletter, at www.WeatherMan.com , or just send a blank email to: astrotips@aweber.com . - Todd Gross