In my first article for Cloudy Nights I’d like to give you a brief history of my love affair with both weather and astronomy and remind you just how much these two earth sciences really go hand in hand in terms of observing. I first became interested in astronomy at the age of 5, and memorized all the planets and how many moons they had. At the time, Jupiter was “known” to have 12 moons, Saturday 9! I relayed this information to my 4 year old friends in miniature astronomy classes that I held in my 2 bedroom apartment in New York City where light pollution ran rampant. They couldn’t care less! Well, although I was fascinated with the planets, Hurricane Donna came along (September, 1960) and cancelled my first day of kindergarten. That was enough to get me into weather. No school? Wow, the power of nature indeed!

From there I have flip-flopped back and forth for nearly ½ a century between astronomy and weather as primary interest. The weather though plays such an important role in observing that my knowledge has benefited me and has given me the upper hand. Let me give you the BEST example I can think of: Solar eclipses. When you book to go to a solar eclipse, the LAST thing you want to do is miss it because of a cloud. Even back in 1972, on a bus trip to Cap Chat, on the Gaspe’ Pennisula, while in High School, I advised the Amateur Observers Society of New York that we should go off-course and try for Nova Scotia to see the eclipse because of advancing clouds. Union regulations prevented the bus driver from working the extra hours to make an additional leg to Nova Scotia, so we missed the eclipse to the clouds at the last minute. Ironically, Joe Rao, a former club member SAW the eclipse in Cap Chat, in a hole in the clouds, which worked against him later. Cocky from that experience, he limited his mobility during an eclipse in South America in the mid 70s. A sole cumulus cloud, one of those little puffy clouds, hung over totality, and he was “shut out”. Never again did eclipse chaser, and meteorologist, Joe Rao miss an eclipse to clouds. From there on in, he checked the climatology of a location, ahead of time. He flew above the clouds, actually re-routing a commercial airliner (with their permission), and he always maintained mobility while on the ground. He has seen about a dozen solar eclipses since then, and I don’t think he was clouded out of any of them! Similarly I kept “mobile” in France in 1999, and found a nice break in the clouds far from the official observing location where thousands were disappointed. Sure enough, I had checked the charts early and knew that clouds would be an issue.

At night, it is a little bit different. Sure, we want skies to be clear, crystal clear, but there is another issue as well: seeing conditions. When the air is turbulent, it wrecks observing conditions of many objects, especially the planets. There is nothing worse than trying to “show off” to a new friend how beautiful Jupiter is in a scope, just to have him see a fuzzy beige blob with 1 or 2 belts of color at most. In coming articles I will review how to “work with” your observing conditions, matching objects to what you are expecting weatherwise. I’ll also tell you how to find the weather for your location without even having to read a forecast. I’ll try to teach you to read computer weather maps, from the Internet, so you can be better prepared. Today, I’m going to stick with the basic four weather systems and how they relate to whether or not to expect clear skies for the night. The big four so to speak: Cold fronts, wam fronts, high pressure systems, and low pressure systems.

First, I’m developing a weather-link resource, a spin-off of my classic review site, http://www.WeatherMan.com It is “Weather for Astronomers”. Go to the bottom of my weatherman site and you will see the portal.
In a moment I will take a look at a recent weather map in the United States. If you live elsewhere in the world, outside of the tropics, your weather will feature similar generally fast moving systems. You can find YOUR weather maps at http://www.WorldWeatherNow.com if you live outside of the U.S.

Now, you are probably asking me in a low mutter “Hey Todd, Why Can’t I Just Use the Clear Sky Clock link?” . Well, you could, as it will tell you what the weather is supposed to be in the next 48 hours, but you may actually be able to make a more educated forecast if you learn how to read the charts for yourself!

In this example below, taken from the “current analysis” on the UCAR site (2nd choice down from the top on http://www.weatherman.com/wxlinks.htm)
You will note the big four systems. high pressure (generally clear skies), low pressure (generally cloudy or rainy), warm fronts (red advancing lines of warm air, generally associated with clouds or showers), and cold fronts (blue advancing lines of cold air, generally associated with clouds or showers). In the winter of course there may be snow instead of rain. Now, in order to get clear skies, one of the best bets is if you are behind a cold front with high pressure moving in. That is the best condition for exceelent visibility days, and crystal clear, high transparency nights. Meanwhile, those light white lines are isobars between the systems, and the tighter they are the faster the wind will blow. Wind is fine for sky clarity, but NOT for sky stability (seeing conditions). 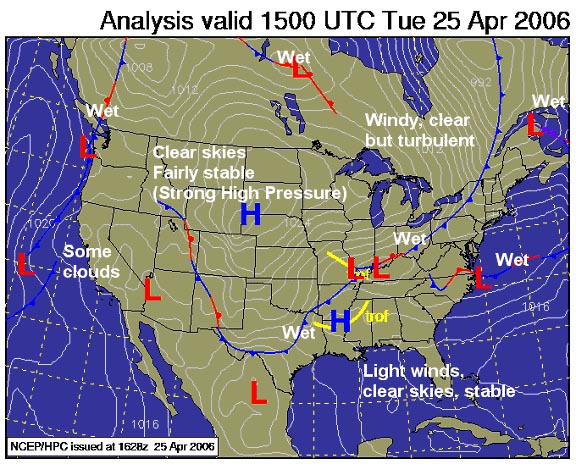 Now, I have marked where skies will most likely be clear, just by the position of the highs, lows, and fronts. There is a high pressure center just off the lower right hand part of the chart not far from Florida, causing clear skies, and light winds. See? Very loose isobars there. There is another high ressure center creating a nice batch of clearing over the plains states, but this one is stronger and likely has “subsidence” within it, or some slight turbulence, from the sinking air. As usual, the winner for best clear, stable skies in this case is Florida and the southeast. No surprise there. Where is it raining? Likely near all the fronts, and all the low pressure systems shown. However, since weather generally moves from west to east, a place like New York State would enjoy improving weather conditions according to the map above. See?


In my next article I will talk about the upper air pattern that goes along with all of this at the “Jet Stream” level. This is important because the Jet Stream itself, a core of high winds aloft, makes for more difficult planetary observing at especially at higher latitudes where it dominates. Until then, please feel free to become more accustomed to the look of computer weather maps using the links I have provided through http://www.WeatherMan.com. Until then, Clear Skies!