In my third article for Cloudy Nights I’d like to follow up on the most important player in the atmosphere in determining what your “seeing conditions” will be like on a given night. Seeing conditions, of course, refer to just how steady your view will be of the moon, planets, double stars, and other small objects. In my first installment I mentioned that seeing conditions are often good when a weather map is showing a large, broad high pressure center over you. However, ultimately seeing conditions are also tied to the winds above, the upper air pattern at the “Jet Stream” level, 30,000 feet up and higher. This is important because the Jet Stream itself, a core of high winds aloft, makes for more difficult planetary viewing even if the air is relatively calm below it.

On television weathercasts you get to see a moving “rope-like” line referred to as the Jet Stream by television meteorologists. In reality, it isn’t quite as simple as that. Take a look at this upper air map readily available at http://www.weatherman.com/wxlinks.htm. Just go to the link named Best Computer Model Rundowns and pick a 200mb (about 40,000 foot level) level chart off the NAM or GFS models. I know it looks complicated at first, but it really is readable. Here is an example: 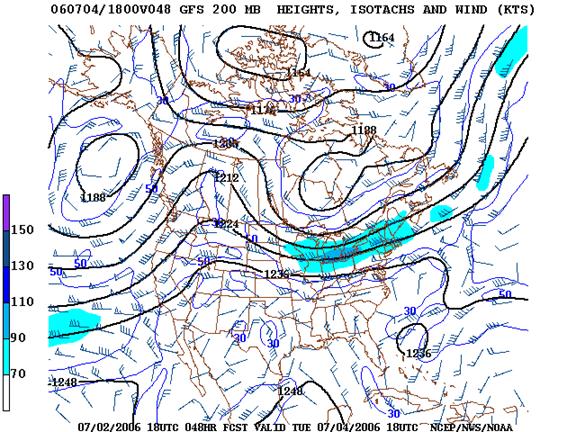 Looking closely, at the forecast for the 4th of July, 2006, you can see the outline of the United States and Canada underneath the bolder black lines (height lines). The wind field, blowing from west to east follows those equal height lines, which is similar to lines of equal pressure which we know about from surface weather maps (refer back to article 1). Instead of high pressure and low pressure systems aloft, we now are looking at ridges (they point up) and troughs (pointing down) respectively.

Additionally, on this chart, the blue areas are the strongest winds of all, the true Jet Stream, where winds are blowing over 70 and 90 knots respectively. In this example, I would consider the Jet Stream blowing from Hawaii to Oregon (the Pineapple express), and then back down to Wisconsin and Illinois, then lopping back up through central New England, on out to Nova Scotia. However, if you look at just the strongest core of winds, the true Jet Stream, you would consider it blowing from southern Minnesota on out to New England. Either way, the upper Midwest, and the New England states will likely have terrible “seeing conditions” from the air pattern above on July 4th, 2006. Not only that, those conditions sometimes lend themselves to severe weather as well, as summer thunderstorms thrive when the winds are fast aloft providing ventilation up top for them to grow. (The air blows quickly across the top of the storms, helping to speed the upward currents within thunderstorms). One important note to make though, is that it is also windy aloft in Canada north of the strongest core of winds in our example. So, even though it is north of the Jet Stream there, skies will still likely be unsteady.

Where would this upper air pattern favor good, stable skies? See where the “flow” bends up in northern Utah? That is the “ridge” aloft and often is a great place to be for observing. (Troughs are bad, the little kinks in the Jet Stream down towards the equator, but ridges are good, those u-shape areas that stick up towards the poles.) The Gulf Coast, including Florida, is also “sitting pretty” on the map above where the winds aloft are light, nearly non-existent.

In my next article I will take a look at the Clear Sky Clock and how it usually will help your observing experience. Until then I wish you clear AND steady skies.

By the way, if you would like more tips and tricks on astronomy including my thoughts on optics and the best bang for the buck you can now subscribe to my Common Sense Observer newsletter, at www.WeatherMan.com , or just send a blank email to: astrotips@aweber.com