Sometimes I wonder if the conveniences of all our equipment and Internet info don’t get the better of us. I head for the dark site with a go-to, battery tank, and three scopes. Fortified with a Telrad, laser pointer, eyepieces for any foreseeable occasion, a thermos of tea, crackers, a set of printouts of tonight’s prospective goodies, a car stereo with favorite melodies, and dusk till dawn to enjoy it all. All I need for total perfection is a pair of bedroom slippers and Fido bringing in the newspaper.

I miss the bewonderment. My first scope was a 6-inch f/4 reflector home-built not long after the Sputnik era. Cradling its 22-inch tube in my lap at a dark site comprising mile-wide wheat fields and not a single human-made light anywhere nearby, it was observing at its simplest. With my one and only Kellner and a magnification of 24x, the Andromeda Galaxy was so star-beclouded and lane-bestrewn that by the end of an hour I could practically see it turn. The Orion Nebula was clam chowder with stars. It took hours to completely parse Sagitta to Sagittarius’s flooding Nile of clusters. Thirty seconds traversing the Milky Way from northerly horizon to southerly in a single motion of waist and arms unveiled the immense tremor of our galaxy by way of the infinitesmal tremors of its stars.

RFT wasn’t a field of image so much as a quality of feeling. It was my right brain giving me insight rather than knowledge. It was like the difference between a Monet painting of his famed garden at Giverney compared with a hi-rez digital photo of the same scene. It was an emotional bond rather than an analytic fathoming.

A few months ago I reached into that long dim memory and brought back the scope that was instant gratification in a tube with glass at the ends. The result isn’t a grab-and-go scope. It’s a grab-and-sit scope. 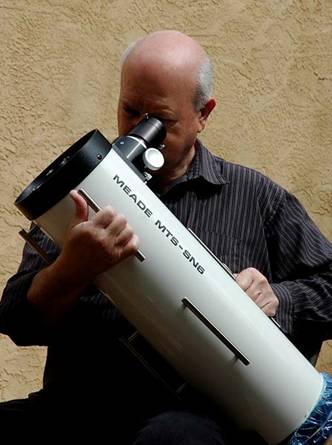 One day an old Meade SN6 came on the market. Grail! It arrived in eBay Standard Nonoperating Condition. The optics had endured some kind of Dust Bowl inside a nick-and-ding tube whose smell resurrected the nearly forgotten word “Bakelite.” I knew the smell, but had never actually seen the stuff. Didn’t it vanish about the same time as tube radios?

It practically begged me to return to lap-scope days… with benefits. For one, the Meade’s sleek, lustrous tube was like holding an eel. The local hardware store came to the rescue for $15.62. For another, the lack of a finder plus a helical focuser made hunting down a Messier like hunting down my preferred toothpaste in the Colosseum of Dentifrice at WallyWorld. A recycled R&P solved the problem for $0.00 and a few minutes ransacking the remote reaches of my parts bin. 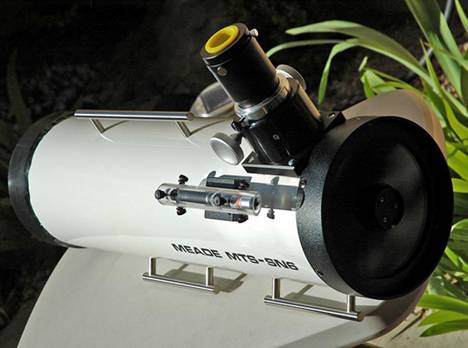 Admittedly, the final configuration resembles a snowmobile with training skis, but right-arm cradle or left-arm grasp, there’s not a single thing in the sky I can’t get to in five seconds. Its obvious shortcoming is stability. The lap might be a cozy place for a cat, but it takes concentration to hold it steady on a star. At first, Vega or Betelguese looked like an ellipse after Frank Gehry gets through with it. The tube can be steadied enough to resolve M3 and M13 at 96x, but they look like a firefly reunion in Borneo. The scope demands the breath control of a budding yogi, and in Twitter yoga groups they call breathing like mine “twiccups.”

Time improves. I still can’t bag DSOs fainter than surface brightness 12 in my blue and green skies; the scope just isn’t for high-power, high-stability observing. Forget the planets. But it tracks the ISS more readily than a pair of 20x80s. It has an instant-response motor drive whose slew rate is over 90 degrees a second. It’s as portable as the nearest place to sit. There’s no set-up, no 3-star align, no break-down.

But it’s also a one-trick horse. A 6-inch f/4 to f/5 Newt is not only the perfect lap-scope size, it’s the only one. Four-and-a-quarter is too shaky and an 8-inch would be like holding an elephant by the ears. 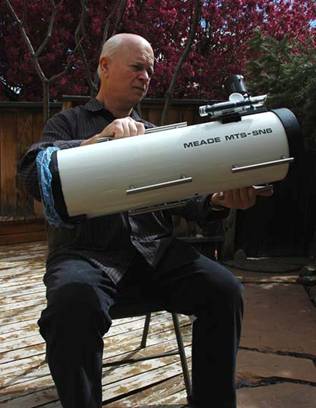 I salve these shortcomings by considering the sound of my AS-GT shrieking through the Messiers like a menopausal cat. Every time I accidentally hit the “Enter” button on the hand-paddle—which some nonastronomer placed half a finger-width from the RA and Dec buttons—my unity with the universe turns into a few phrases on the no-no list at a star party. (Now see here, hand paddle designers: do we or do we not wear thick gloves out there between November and mid-May? Duh.)

I have another RFT that gives similarly delighting views, a 6-inch A. Jaegers f/5 refractor. Optically it’s a better performer (as long as I steer clear of anything blue and bright), and can go to 226x on DSOs without breaking a sweat. But it weighs 22 lb. Maybe Michael Jordan could hand-hold it, but not me. The SN6 weighs 11. Even using dead-reckoning when the laser pointer’s batteries go flat (hourly, Grrrr), I’ve hopped to 16 summer globulars in two minutes and 26 Puppis OCs in three. The full expanse of M101’s HII clouds is more evident at 26x in this 6-inch than at 92x with my Vixen 140SSi.

This scope has saved many an observing night temporarily gone sour with patchy clouds. Setup is a dream: (a) remove tube cap, (

remove eyepiece cap. It is the perfect nightcap after all the other gear is stowed back in the car and it the faint hints of dawn are too darn beautiful to waste staring at headlights on the way home. At 20x in a 38mm eyepiece, NGC 147, 185, and 278 are all in the same field, as is the breathtaking line formed by Lagoon, Trifid, NGC 6544, and NGC 6553. At 30x, M10 and M12 both lie just inside the diameter of the field stop; if I didn’t know what they were I’d think this was the worst case of coma, ever. Add an OIII, and the North American and California Nebulas practically jump into my lap. The Cygnus Loop? If your daughter’s boyfriend ever gives her a ring like that, plan on wedding bells.

Kepler and Brahe must have felt like this, but today we know what this stuff is. And in case one thinks all the universe’s majesty lies overhead, imagine a three-second glimpse into the feather hues of a pheasant at 60 yards.

My podiatrist loved my GEM mounted Newtonians because they provided him with so many office calls. The day I succumbed to the charms of refractors was the last day I darkened his door. Now I’ve removed every last frill except me.

Unfortunately, now something else is getting flat. This is an occupational hazard not covered by Medicare. 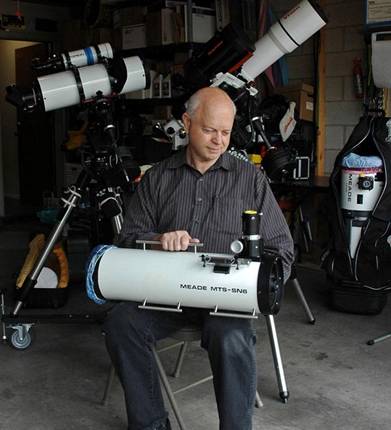