I've been observing on and off for three years now with my little 90mm Orion refractor and, to revive my declining use of the telescope, recently purchased a Polymer Plus solar filter from Thousand Oaks Optical. Suitably equipped, and with the path of totality a mere 1,200 km from home, the December 4, 2002 solar eclipse seemed like a great excuse for a week away with like-minded friends. Little did we know we were in for the treat of a lifetime.

Tshipise is a hot-spring resort on the northern border of South Africa. It is in the Limpopo Province, named after the mighty Limpopo river which separates South Africa from Zimbabwe to the north, and so frequently floods Mozambique to the east. The camp was scheduled to see about 60 seconds of totality, but our viewing site was 36 km to the east where the main road intersected the centerline of the eclipse, offering a whole 80 or so seconds of totality. 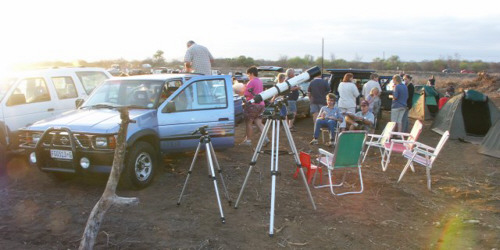 Sunrise at Tshipise with everyone still hoping for a clear morning

First contact was due at 07h15 and I would like to say we awoke to a bright, clear dawn sky but two things in that statement would be incorrect - firstly most were already at the viewing site as the gates opened at 04h00 (not too many had gone to sleep), and secondly, after a crystal clear evening, clouds rolled in from the south-east and by 06h00 the site was completely overcast.

The mood of the 2-3,000 observers at the site was somewhat downcast, especially when we established that the other potential observing sites within reach had suffered a similar fate. However, we would still at least experience the sudden shift into darkness with all the reported associated phenomena of birds going to sleep, insects awakening, predators becoming more active in the cooler air, and all the other confusion of nature we had been told to expect in the plethora of expert articles in the press leading up to the event.

Then we got lucky. Very lucky. As first contact approached a gap appeared in the clouds and we were able to glimpse the first tiny bite out of the sun. Almost as if on a schedule, the tiny gaps appeared in the clouds at regular intervals in the next hour and we were able to happily watch the progress of the moon across the sun's face. At about 99% totality the clouds opened for the last time and stayed open for the period of totality and then closed for the rest of the morning. 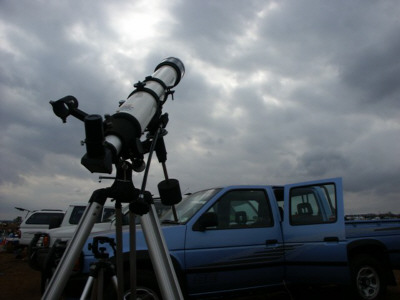 Not the greatest eclipse viewing weather

So what did we see and experience?

With the Polymer Plus filter on the 90mm Orion refractor (using a 25mm Kellner the magnification was 36x) the sun was a sharp disc with distinct sunspots gradually being overtaken by the advancing lunar disc. The view, in the periods when we had one, was really good and I certainly felt that this little rig was perfect for the task. The waft of wispy clouds across the sun's disc added to the building anticipation and didn't detract from the view at all, except of course when wispy became thick and heavy!

Let's look at the sky first.

The sky remained light right up until after 90% totality, there was really very little perceivable drop-off in light levels until then. After 90% it became gradually dimmer but was still quite bright at 99% totality. At that point there was a very rapid, and exciting, shift into darkness. This darkness was not total, you could still see everything around you, and the horizon was lit by a beautiful orange glow which was the edge of totality some 35 km away. Venus popped out of a cloud gap but Mercury and anything fainter were unfortunately obscured by the blanket of cloud. As totality passed the atmosphere brightened very rapidly, and such was the buzz created by totality that nobody mourned the complete cloud cover that followed.

The temperature dropped from 28°C to 23°C from first contact to totality - not as big, or as noticeable, a change as expected but the cloud cover was probably the damping factor in this.

And, of course, the sun.

As mentioned before, I felt I had the sole ringside seat with the telescope, my view of the sun felt very personal. The progress of the moon across the face of the sun was exciting, but nothing compared to the last few seconds before totality when mountains and valleys on the edge of the lunar disc cause the sun to sparkle and dance along the rim. This is known as Bailey's Beads and is, in my humble opinion, a totally inadequate term for a such a magical sight! Through the telescope I did not see a diamond ring effect, although the rest of our party, viewing through eclipse glasses, did.

As soon as the sun was totally eclipsed I whipped off the solar filter and viewed the corona through the unfiltered telescope. This was probably the most incredible part of the event for me, as I have never before seen the corona. After the contrasty, yellow and black view through the filter, the beautiful, royal blue disk and blue and white corona were quite exquisite and it took all of my resolve to drag my eye away from the eyepiece to take in the rest of the eclipse experience. I managed one last look at the corona before the sun peeped out once more and suddenly it was over.

We shouldn't forget the animals!

We had all talked endlessly the previous evening about what to expect, and high on everyone's agenda was experiencing the effect of the sudden darkness on the local fauna. As the viewing site was a cleared field several hectares in size the only fauna in evidence were huge ants and mid-size scorpions. They had already had enough of the experience before first contact, having spent most of the morning avoiding, with varying degrees of success, the thousands of tractor-treaded hiking boots that had descended on their quiet environs. During totality nobody looked down, so we undoubtedly missed the intricate and ancient scorpion eclipse ceremony, not to mention the giant ant pyramid rite.

As for the calls of nightbirds and growls of active predators, these may have been in evidence but were drowned out by the excited ooh's, aah's, and look there's of several thousand of their emotional and more vocal bipedal brethren!

The eclipse was certainly an emotional experience. While I didn't burst into tears like so many did, the sense of wonder was palpable. Many were hugging each other and jumping around like excited pre-schoolers and I would have joined in except that most of my companions were big and hairy and hadn't been properly sanitised for the last couple of days!

Everyone, without exception, started to think about the next eclipse, where is it, how will we get there?

By now that you'll have gathered that this isn't a technical description of a celestial event. It quite simply is not a technical event - it is an emotive and uplifting experience.

For those in the Kruger Park and other sites who missed the advancing disc, sparkling beads of light at the moon's edge, and the wondrous corona, I can only hope that the rest of their trip was some compensation. Herein lies an important consideration - make sure that your eclipse adventure will be worthwhile without the eclipse, and then get the eclipse itself as a marvelous bonus. For our little party, who hadn't traveled very far, we had already had a fantastic time floating in the hot springs, viewing the baobabs, and holding an impromptu star party at the camp site with those camped around us (for most of whom it was their first view of Saturn's rings and the Orion nebula!). The eclipse was that beautiful cherry on top of an already great stay. 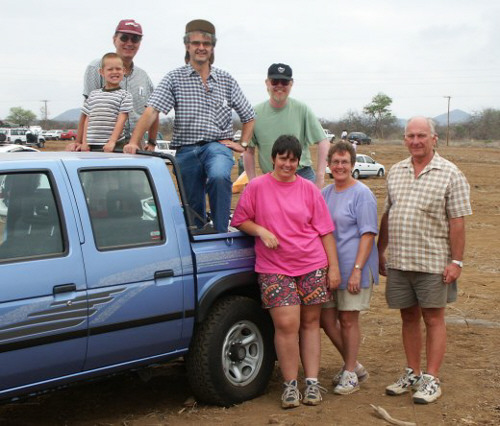 A very relieved and happy group, from left to right are Christian, Rolf, Nigel, Duncan, Carisa, Elise and Carel

Thanks to all who were there and made it a comfortable and happy visit to Tshipise.

So where are the photos of the event? We had both the University of the Witwatersrand and the Council for Scientific and Industrial Research at our viewing site with live webcams, a radio telescope (which wasn't bothered by the clouds) and other gadgetry. I happily scaled back my plans of trying to capture the eclipsed sun, Venus and Mercury in one frame as I thought that the professionals would cover this, and the clouds were a problem as well. However the professional coverage of the eclipse has so far been disappointing. You can view the CSIR results at http://www.csir.co.za/eclipse - I haven't seen any Wits output yet.

If you are considering organising eclipse tours for Antarctica, Turkey or Beijing (or any partial eclipse in between) then you might want to take the following points into consideration: