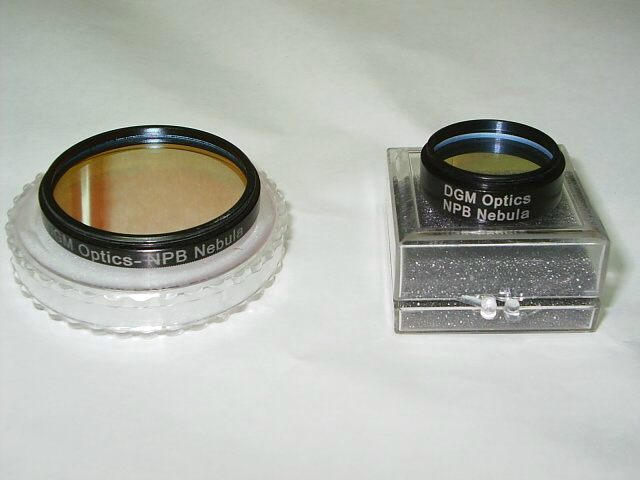 Nebula filters have been a real boon to the deep-sky observer. They help bring out some detail in emission nebulae to the eye that previously only were shown in some photographs, and have even revealed some objects that are often not visible without a filter or are seen only in much larger apertures. One of the most useful designs of nebula filters are the "narrow-band" nebula filters that let through the emission lines of Oxygen III and Hydrogen-beta at more than 85% transmission while excluding almost everything else. The standard for many years for these filters was the Lumicon UHC filter, but now, DGM Optics and Omega Astrofilters have produced a new entry: the DGM Optics NPB ("Narrow Pass Band") Filter. It offers fine performance for a fairly modest price.

The NPB filter is a multi-layer interference filter which uses thin-film dielectric coatings to produce sharp passbands at a high level of transmission. Unlike some of the older filters which used laminations to protect the coatings, the NPB uses hard oxide coatings which tend to be a bit less prone to scratching or ghosting. The filter is mounted in a standard eyepiece filter-thread filter housing which has a clear aperture of either 25.6 mm for the 1.25" model or 43.6 mm for the 2" filter model. These numbers are slightly less than the maximum field stops for 1.25" or 2" eyepieces (27 mm and 46 mm respectively). However, the resultant reduction of maximum true field is small, and would only be about five percent at most (it would occur only with eyepieces possessing those maximum field stop diameters). The filters also come in small protective cases for proper storage, although both were a little thicker than the ones that came with my Lumicon filters. I did have a minor problem with the threading on the 1.25" model, as it only screwed onto some of my eyepieces about a third of a turn before the threads locked up. Still, that was more than enough to keep the filter properly in-place, and the 2" model did not show this difficulty.

The main passband is fairly sharp in shape and easily contains both the OIII doublet and H-Beta lines at a very high level of transmission. The Full Width at Half Maximum is close to 24 nanometers, and the area of greater than 90% transmission is nearly 17 nanometers wide with a peak transmission level of about 95%. This compares to a Lumicon UHC's 27 nm FWHM and a 90% transmission width of nearly 21 nm (peak transmission again about 95%). The shape of the NPB's passband reminds me a little of that of the Orion Ultrablock filter, as that one is a more little rounded on the passband skirts as well. However, unlike the Ultrablock, the NPB filter has a booming red passband that takes in the H-alpha line at over 80% transmission. This will probably make a major difference only for use with large apertures, since the human eye has very poor sensitivity at H-alpha. The Lumicon UHC also has a red secondary passband, but the Ultrablock does not.

I tested the NPB filter at a dark sky site (ZLM 6.0 to 6.8) as well as from my home (ZLM 5.0 to 5.8, mild light pollution). I used the Lumicon Multi-filter selector to provide instant and unambiguous comparisons to both my 1990's vintage UHC and my new one, as well as against the Orion Ultrablock using a variety of instruments from my 100mm f/6 refractor to my 10 inch f/5.6 Newtonian. Overall, the performance differences between these filters were not extremely huge, as all three brands do work pretty well in enhancing many emission nebulae. However, there were some differences which, at least to the trained fully dark-adapted eye, were fairly noticeable. The sky background in the NPB was a bit darker than it was in the UHC, and was fairly comparable to the sky darkness in my Orion Ultrablock. Star images normally aren't a huge factor when observing nebulae, but I did note that when observing the brightest stars, they seemed just a bit more concentrated and slightly brighter in the NPB than they were in the UHC. Still, the NPB did show a bit of the fainter red secondary star image "ghosts" that were also shown in both my old laminated UHC and my new non-laminated model, although the NPB's red secondary images were slightly less displaced from the main star image than the UHC's were. The Ultrablock showed only greenish star images, as its single passband blocks most red light.

On various emission nebulae, the DGM Optics NBP seemed to provide just a bit more contrast than the Lumicon UHC on a fairly consistent basis. This was especially true of the "pure" emission nebulae, and was kind of expected, given the NPB's somewhat narrower passband width. When there was a mix of emission and reflection nebulosity, the UHC tended to show a very slightly higher level of brightness to some of the glow, but for the fainter outermost nebulosity, the NPB usually still showed a bit of an edge in contrast. I did like the view of the Veil just a bit more in the NPB than the UHC, and for M42, the difference was fairly noticeable for another reason: color! The nebula and stars appeared more greenish in the UHC, while in the NPB, the nebula was a more neutral color, with a bluish white core and even hints of faint pinkish hues in some of the brighter surrounding sections even when using only my 100mm f/6 refractor (22x and 56x). The very outermost tendrils were just a little easier to see in the NPB, and on the Rosette, the entire object again showed up with a little more contrast than in the UHC. Surprisingly, the more common Orion Ultrablock was yielding a performance closer to that of the NPB than the UHC, but the color was more like that of the UHC. Planetary nebulae also seemed just a tad sharper in the NPB than in the UHC, although again, the difference in performance was small enough that the novice observer might find it hard to tell which filter was which, at least visually. Cost was also a factor, as the NPB was a bit less expensive than the Lumicon UHC. Overall, of the three narrow-band filters, I liked the DGM Optics NPB the best.

What I liked about the DGM Optics NPB Filter

1. Good overall enhancement of many emission nebulae.
2. Slightly better contrast than the UHC.
3. Better color rendition than in the UHC or Ultrablock filters.
4. Moderate cost.

What I did *not* like about the DGM Optics NPB Filter

The DGM Optics NPB Filter is an excellent narrow-band nebula filter which I recommend that nearly every amateur have in their eyepiece box.